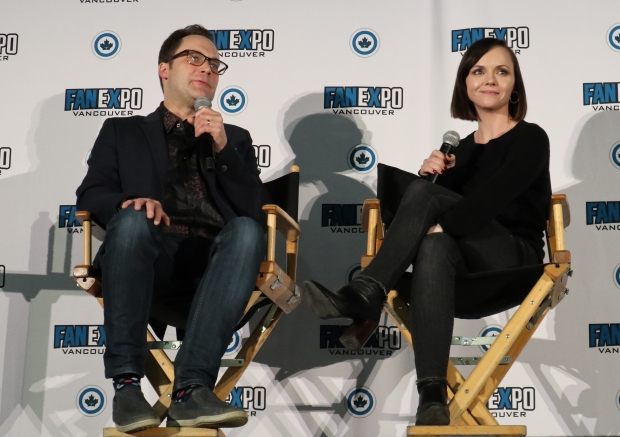 It’s hard to imagine anyone else as Wednesday Addams. While other actresses have played the iconic child for most of us Christina Ricci simply is Wednesday. But it almost didn’t happen. At Fan Expo Vancouver, Ricci shared that she didn’t want to go to the audition. After a full day of auditions, she was tired and just wanted to go home. Her mom then told her that it was for a remake of her favourite show as a kid, so she had to go and it would be easy she’d just have to read the lines with no emotion. And the rest, as they say, is history…

Her favourite Addams Family movie was Addam’s Family Values (1993) because there was more for her to do and more kids on set. One of her favourite memories of filming was during the summer camp play scene. Ricci shares there was one take where she got a little bit too into the scene and sprayed Jimmy Workman (Pugsly) with fake blood. Unfortunately, Workman didn’t think this was funny and thought she was making fun of him. The producer then came to talk to Ricci about “being mean.” Ricci also shared many fond memories of Raul Julia (Gomez). “[He] was the most wonderful man I had ever met,” he was always singing and dancing.

Another favourite part of the Addam’s Family movies was that they let her name Wednesday’s pet lizard and in true Wednesday fashion, she named it Lethal. She also found it easy to switch between Wednesday and happy Wednesday. “When you’re [a child] you trust your imagination more and just do it.”

Out of all the films she has been in Vincent Gallo’s Buffalo ’66 (1998) stuck with her the most. During filming, she was in a transitional phase of both her life and her career. She also described that Gallo was a very method actor and she often couldn’t distinguish between what was method and what wasn’t. Ricci said she had funny stories from the set but couldn’t repeat them because there were children in the room. “I like the idea of being defined by that movie,” Ricci said.

A funny story she did share though was from the set of Mermaids (1990) which also starred Cher and Winona Ryder. Cher was always very aware of her on set and wanted her to understand everything that was happening even if the director and producers did not. There were times when Cher would hide Ricci in her trailer’s closet during production meetings so Ricci could listen in. She also shared a story of Ryder teaching her how to smoke a cigarette. There were times when Ryder was too lazy to get up and get a lighter so she taught Ricci how to do it.

When asked about playing Zelda Fitzgerald in Z: The Beginning of Everything (2015) she said she really liked playing Zelda. “She never really was able to define herself,” so Ricci played her in a way she thought Zelda would have wanted to be seen. They had another season of the show ready to go, which Ricci said would have been great but the show was cancelled before they got a chance to film it.

Ricci also talked about being the national spokesperson for RAINN (the largest anti-sexual violence organization in the United States). She had chosen very early on that it was a cause she wanted to be involved with and started when she was 17.

She also joked about being a Bond Girl but didn’t think she’d be very good at it because whenever she shoots a gun she would duck/. She also said she would love to be Catwoman but it would have to be a geriatric Catwoman in the future

When asked about kissing Devon Sawa in Casper (1995) Ricci said “she wasn’t too happy about it.” Her mom was on set during filming and no one wants to kiss boys in front of their mom.

Ricci also shared that she loved Vancouver and out of all the places she had worked she had spent the most time here.

And of course the one thing everyone was dying to know… when asked if she’d ever do another Addams Family movie Ricci said she would definitely do it. So Hollywood, if you’re listening get on this you like making sequels and this is one I’d actually want to see.

Kirsten is a pop culture junkie. When she isn't watching bad movies she performs as a puppeteer for both stage and screen. She is currently working on a one-woman show and a brand new podcast which will hopefully be released in fall 2020.