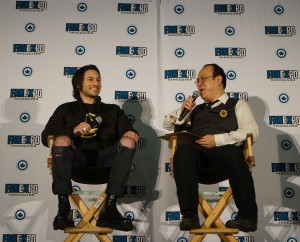 Sitting alone at his Fan Expo Vancouver 2020 panel, Jesse Rath felt weird being up on stage without any of his Supergirl co-stars so he decided to rectify that and bring up his co-star Nicole Maines, who plays Nia Nall on the show. 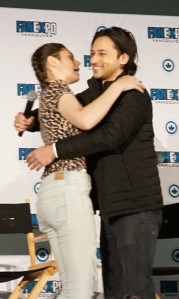 Maines was a delightful surprise to fans in attendance as her appearance was not announced for Fan Expo Vancouver 2020.

Supergirl of course was the primary topic of discussion and the two shared some intel of what is upcoming, secrets behind the scenes and what they hope to see for their characters.

We learn from Maines that episode 15 will explore Nia’s trans background. For those that don’t know, Maines is the first ever trans superhero on TV, a distinction she does not take lightly.

A fan asked her how difficult was it for her to break into acting as a trans person.

“There are not a lot of roles but at the same time there are more roles.” She shared that she is reading scripts with a trans role that specifically asks for trans actors to portray them. “There is not a better time now to break into industry for trans actors as there is a demand for roles.”

A fan asked Rath whether or not he knew that he was portraying Brainy as being on the autism spectrum and he replied that he did not intentially set out to portray him that way.

Talked turn of course to Crisis on Infinites Earths and what it was like filming the mega cross-over. Maines and Rath both replied that a lot of leather was involved and that The Flash’s Grant Gustin and Melissa Benoist would have speed walking races on set. Maines loved being in fight scenes and Rath found it weird to be on the Arrow bunker set but working with the Supergirl crew. He added that he had fun working with Caity Lotz (Sara Lance/White Canary) and Bitsie Tulloch (Lois Lane) and hopes to do more cross-overs.

A recent episode of Supergirl featured Meaghan Rath, Jesse’s real-life sister, as a female Brainiac and he talked what it was like working with his sister.

“I love work with [Meaghan]. It was our fifth or sixth time what we worked together and I pitched her being on Supergirl. If a scene called for us to be annoyed with each other, we can pull from real life. I would love to have her back as people seem to prefer the female Brainy over the male Brainy,” he shared.

“We are big fans of those scenes. [Brainy and Lena] are both are same. They come from evil families and have repressed childhood trauma,” Rath said on the Brainy-Lena friendship.

Rath also shared how he had so much fun teaching Sam Witwer (Ben Lockwood/Agent Liberty) to imitate him as Brainy for a season 4 episode. He shared to that Witwer had him film himself reading the lines as Brainy to help inform the impression.

Rath was on set for that moment and he thought it was so funny to watch and got a kick of Witwer doing it. In fact, Rath said that Witwer’s imitation of him lead to him using some of the mannerism that he did into his Brainy.

Prior to landing the part of Nia Nal/Dreamer, Maines did a lot of research and that DC sent her copies Legion of Super-Heroes comics and book marked all the Nura Nal stories for her to look at.

Another fun tidbit is that when Rath auditioned for Supergirl he thought he was reading for a guy called Ralph Richards, the smartest guy in the room. When he landed the part, Rath was told two days before filming that he was going to be Brainiac 5.

Both hope that their characters backstories get explored more with Maines wanting to see Nia’s life on Naltor and Rath exploring Brainy’s relationship with his family.

As for season 5 of Supergirl, Maines loves that Nia is more comfortable with her powers and that this season is less her being trans superhero and more dealing with stuff in her life. As she says this, Maines gives a pointed stare at Rath (their characters broke up earlier this season).

At the panel, a fan asked whether or not Brainy and Nia will get back together. Rath honesty answered that he does not know but he and Maines will continue to share scenes together. Maines called Nia and Brainy the Ryan and Kelly and not the Jim and Pam of Supergirl.

What the two knows what is in store is the upcoming 100th episode. Maines said she had a lot of fun filming it. Rath added that are going to be a ton of familiar faces in it and can’t wait for people to see it.

The 100th episode of Supergirl airs Sunday, February 23 at 9pm ET on the CW and Showcase in Canada.