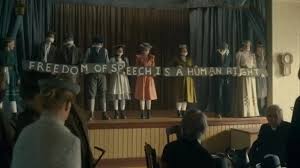 One of the central relationships of Anne of Green Gables has always been the enduring friendship of kindred spirits Anne and Diana. So it was a bit difficult to see the two best friends hit what I hope to be a short term rough patch in their friendship. How did this come about?

It all has to do with Diana not telling Anne about her secret relationship with Jerry. So far, Diana has been keeping her relationship with Jerry a secret from everyone. During a walk with Jerry, Diana comes to realization that she and Jerry don’t really have much in common after trying to have an intellectual conversation about Frankenstein. Jerry has noticed that Diana seems to be only interested in the two of them kissing. This leads Jerry to go Anne for advice on his girl. Jerry thinks that his girl is ashamed of him because he is poor and she is rich and is only interested in him when they kiss. Jerry assumed that Diana told Anne about them but Anne had no clue and is hurt.

When Diana arrives before the kids of Avonlea stage a protest (more on that later), this is where the bosom buddies friendship fractures. Anne is hurt that Diana didn’t tell her about Jerry. Diana tries to apologize and says that her relationship with Jerry was a mistake and should not have happened. Anne thinks that Diana will dump her as a friend once she goes to finishing school because she is not as high brow as her. Diana defends herself to say that she always stood up to Anne from Day 1 but it seems to two young ladies aren’t listening to each other and it results in Diana breaking off the friendship locket and throwing it to the ground.

About the protest, what leads to it is Anne’s editorial on the equality and respect of women that came about because of Billy’s treatment of Josie. This editorial touched the nerve of the citizens of Avonlea. Particularly affected is Josie. The Pye’s are upset because they think that this has ruined Josie’s chances with Billy and her father tries to go an fix it. Josie doesn’t want Billy back because of how he treated her but her mom tells her pretty much to forgive and to forget. Anne tries to apologize to Josie but gets a slap in the face. Josie spits out that Anne now has reduced her to trash like her.

The Andrews family doesn’t think Billy did anything wrong and that Josie is not the girl for him and vow to find another girl. Prissy, who is back from university, thinks that Josie is the victim here but her words land on deaf ears. Also landing on deaf ears is Prissy’s ideas for the farm and also her desire to get her dowry. It seems her father just wants her to find a husband.

There are consequences to Anne’s editorial. The school newspaper staff are not happy with her actions and Gilbert said that Anne should have consulted them as they would have supported her. Miss Stacey removes her from editorials and puts her on the fertilizer beat. However, the school board wants to take away the printing press but end up just imposing what they want the school newspaper to write and that Anne should be fired. Rachel tries to be the voice of reason amongst the old white men but they just tell her that she is being a hysterical female.

Anne is very upset to being fired and goes to the story clubhouse where she gets the inspiration for her protest. Anne goes to the schoolhouse thinking that she still needs to beg forgiveness but finds people apologizing to her. It seems that Gilbert defended Anne and her editorial saying that she would have defended everyone in the school room.

Anne goes back to Josie to tell her that the only person that can tell her her worth is her. These words seems to hit Josie who later that night rejects not only her mother’s words on relationships but also Billy.

The next morning, the school kids minus Diana but plus Prissy and Josie march to the town hall to interrupt the school board meeting to state that freedom of speech is a human right. When the preacher tries to shut it down, Miss Stacey has the moment photographed. This causes the school board to stand down.

Later that night, the school kids and those involved celebrate. Anne and Gilbert share a sweet moment where the two acknowledge that they aren’t fighting. Both compliment each other and gain new respect. Just when it looked like the two might share a romantic kiss, Anne tells Gilbert that Winnifred is a lucky woman. However, Gilbert doesn’t seemed to be thinking of Winnifred at that moment.

While all the celebrating is going on, the school board has decided to take away the printing press from the kids in the dark of the night.