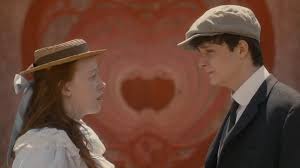 It is summer vacation for the Avonlea school children and everyone in preparing for the County Fair. The Cutherberts are entering in various categories: Marilla is entering her plum puffs, Matthew is entering a giant radish while Anne’s entry is recreating Mary’s cake recipe. Anne is obsessed with getting things perfect but has a terrible head cold. Things get only worse for her when Gilbert arrives to borrow some cufflinks from Matthew. It seems that Anne’s crush on Gilbert is full blown.

You may be wondering why Gilbert needs to be borrowing cufflinks? Gilbert is meeting Winnifred’s parents and is desperate to make a good impression.

At the fair, Anne sees a fortune teller who gives her some vague predictions but it is specific enough to Anne that she believes when the fortune teller predicts that her true love is a good dancer. That settles it for Anne – Gilbert is her true love.

However, Anne comes crashing back to Earth when she sees Gilbert with Winnifred arm in arm walking the fair grounds with her parents. Anne rushes back to the fortune teller demanding her money back. The fortune teller says that there are no refunds. Anne laments that she really thought Gilbert was her true love and that it felt nice at the possibility of someone looking at her in that way, which she thought was not possible. I am not sure I am liking seeing Anne have unrequited feelings for Gilbert. One of the charms of the books and the 1985 mini-series was that I loved that Gilbert had unrequited feelings for Anne for the longest time until she woke up and realized she has been in love with Gilbert this whole time. Is this version of Anne of Green Gables doing the reverse? I am not liking this one bit.

When it comes time to judging, Anne’s cake is a fail because she accidentally put linament in it instead of vanilla. Anne runs off and Gilbert goes after her. Anne congratulates Gilbert on his girlfriend but the charge between them is electric. Gilbert actually chased after Anne to say that Mary would have found the judging of her cake hilarious.

Marilla won first place in her plum puff category while Matthew’s radish was names most unusual. Matthew takes it as a badge of honour and gives the ribbon to Anne as a way for her to embrace who she is. Marilla then suggests they all take a hot balloon ride gain some perspective.

At the town dance, this is where the episode turn dark. Josie goes to meet Billy outside and the two start to kiss. But Billy starts to get forceful that Josie breaks away from. When the two return to the barn separately, we see Billy start to spread rumours that he and Josie went quite far. While all the dancing is occurring, Anne sees people gossiping about Josie. Anne conforts Josie then confronts Billy who course denies he did anything wrong like the jerk that he is.

The next day at the schoolhouse, the kids are putting together the next issue of the Avonlea Gazette. Anne is infuriated at Billy’s treatment of Josie but the other girls seem to be defending Billy and that Josie was asking for. Diana seems conflicted and mentions the word “consent” which I find a weird way to shoehorn in #MeToo in Anne of Green Gables. When no one will write about what has happened, Anne takes it upon herself and we see her late night at the printing press but we don’t know what she has written.