Once again, the cast of The Flash showed off their chemistry for the Fan Expo Vancouver crowd and leading the raucous fun is Tom Cavanagh himself.

Cavanagh teased that if people don’t watch this week’s King Shark vs Gorilla Grodd episode then the show would have truly “jumped the shark.” He added that the show spent 70% of its special effects budget on this episode.

Nicolet also said that Jesse L. Martin comes back for the King Shark versus Gorilla Grodd episode after being MIA for a quite a number of episodes. Nicolet said that Martin just need time to recover from his back injury. 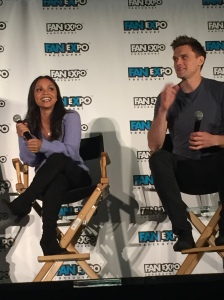 Nicolet and Sawyer (Ralph Dibney) are the newest cast members and when asked what it was like jumping into an already established cast, Cavanagh said that the show gets to have “two of the best humans I’ve ever met and they get to bring their talents to the show.”

Sawyer mentioned that his very first episode of The Flash was one that Cavanagh directed and calls him an amazing director and it was an experience that will stay with him. Nicolet added that she is lucky to and fortunate to be on The Flash.

As for why Amell was on The Flash panel since he is no longer on the show? Well it is because Amell is in Vancouver to film his Amazon Prime TV show called Upload from Greg Daniels, the man behind The Office and Parks and Recreation. According to Wikipedia, the show is set in a future where “humans are able to ‘upload’ themselves into their preferred choice of afterlife.

Amell also talked about Code 8, the film he show with his cousin Stephen Amell.

“Ive always wanted to work with Stephen,” said Amell. “My favourite on-screen moment  was working on the superhero team up on The Flash but we never talked to each other. We thought it was cool to work together. Stephen couldn’t be in the short but was instrumental with the Indiegogo.”

Amell said that Code 8 was shot over two summers in Toronto and that film will have its first ever screening on April 24 in Vancouver.

Since this was Fan Expo, of course the cast had fun with the fans. All of the cast was obsessed with having some mini donuts as you could smell it coming from the show floor. Fans obliged as several fans came to the stage to give them bags of the sweet treats. Nicolet felt left out as she can’t have gluten so a fan got her a lemonade. At one point, Cavanagh was tossing out mini donuts to fans.

Cavanagh credited fan for the shows success as they wouldn’t have made it to 100 episodes without them. “Getting to triple digits is hard.”

A fan wondered if the rumours of Valdes leaving the show after season 5, he simply put a donut in his mouth.

As for the cast’s favourite moments, Cavanagh said that he loves the season 1 episode where the Reverse-Flash kills Cisco. Cavanagh added that he loves playing all version of Wells but “I am on the show to be the Reverse Flash, to put on the costume and be the super villain. It is my raison D’être.”

Nicolet loved it when Cecile adopted other people’s personalities, especially the pizza guy. She added that she had to figure out where Cecile fit in when she got powers. “I put myself in the shoes of the audience and played up the joy of being able to read minds.”

Valdes really loved the season 2 Earth-2 episodes because he got to do the arrangement of the piano accompaniment of Joe West’s jazz singer.

Also, the cast was very complimentary on Danielle Panabaker’s directorial debut that was recently shot.

“She was prepared and in control and was very inspiring to watch as an actor and a person,” said Sawyer.

Valdes added that Panabaker knew what she was doing and “wants to be her when he grows up.” Nicolet continued the praise by saying how proud she was of Panabaker and she should continue to direct in the future.