The Canadian version puts their twist on the British version of Tudor Week or Victorian Week with Canada Week that challenges our bakers in making baked goods with a Canadian twist.

The Bake: Tourtiere with a complimentary condiment to make the pie pop

What I would bake: Since we can use whatever filling, I think I would make a Indian spiced lamb tourtiere with a mango chutney

Halifax Donair Tourtiere with donair sauce. Rochelle liked how it smells but it looked dry. Bruno thinks the meat could use more fat.

Traditional Tourtiere (made with ground beef) with homemade chili sauce. Rochelle liked that it is a tourtiere is how it should look and liked the balance of flavours.

Tourtiere a la Vancouver Island with bison, turkey and lamb. Bruno thinks it is moist but too much cloves. Both liked the look of it.

Christmas Eve Tourtiere with turkey and bacon and a cranberry-apple chutney. Bruno notes that Terri’s pie cuts nicely and that the meat holds. Rochelle likes the buttery crust and says her family is lucky to get this tourtiere.

Saucy Vegetarian Tourtiere with ground almonds, carrots and beets paired with tomato relish. Bruno thinks it has a rich texture and Rochelle thinks the beet make the pie look meat like.

I’ve never made maple cookies before but I am sure that I can do it. I’ve made sandwich cookies before. However, I do think the trick for me is making the maple leaf and not getting stem braking off.

It seems a lot of bakers didn’t put enough filling in their cookies or added too much sugar on top.

Here is how our bakers did from worse to first: 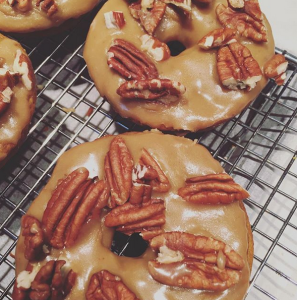 What I would make: Pumpkin Maple-Glazed with toasted pecans donuts and double chocolate donuts (after my favourite Tim Horton’s donut). These would be cake doughnuts.

Everone’s donuts sound and look amazing especially Linda’s. I did laugh out loud when Julia joked the judges have the thankless job of tasting all of these tasty donuts.

S’mores and poutine donuts. Rochelle calls these and playful. Rochelle loved the indulgent flavour of the S’mores.

Sea to Sea donut (blackcurrant glaze and blackberry-filled jelly). Rochelle thinks her donuts are too greasy.

Okanagan Peach beignet and French Crueller with a raspberry glaze. Rochelle called James’ crueller sensational and liked the raspberry glaze. Bruno thinks James could have put some peaches on top of his Okanagan peach donut but he loved the flavour calling it a showstopper.

Who is in the running for Star Baker: Linda and James

Who is in danger: Jude and Julian

I think the front-runners for the final three are: Linda, Vandana and Sabrina

Next week: Best of Britain Week