It is the penultimate episode of season 1 of Anne and we get another classic moment from the book and CBC miniseries: Anne saving Minnie May Barry, Diana younger sister.

In fact, we open the episode with Diana running through the snow in the dead of night to fetch Anne to help save her sister. When Anne hears Minnie May’s sister, she quickly diagnoses her with the croup and gets Matthew to fetch the doctor from Carmody.

At the Barry household, Anne is doing her best to save Minnie May who is unable to breathe because of the phlegm caught in her throat. Aunt Josephine is visiting the Barry’s and doesn’t trust Anne is saving Minnie May and is kind of in her way. Aunt Josephine feels they should wait for the doctor to come but Anne tells her that if they do that, Minnie May will die. When it starts to look dire, Minnie May does cough up the phlegm and the worse is over. When the doctor arrives, he credits and praises Anne’s quick thinking for saving Minnie May’s life. This has impressed Aunt Josephine and also turned Mrs. Barry’s opinion of Anne around. Mrs. Barry has allowed Anne and Diana to start hanging out and be friends again.

Anne is overjoyed and we see the two girls walk to school arm in arm. Diana wonders how Gilbert is doing considering Anne has been visiting his home everyday to give him his school work. Anne doesn’t really say much but to once again deny that she has any interest in Gilbert except academically. Diana mentions that when Gilbert comes back to school it most likely means his father has died. 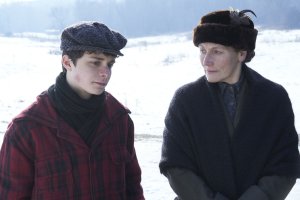 Unfortunately, what Diana says ends up coming true. But before that we see Gilbert doing his school work by sitting at his dad’s bedside. His father mentions to his son how grateful he was to be head out west on train and how it was a memorable trip. While Gilbert is repairing a wagon, his helper calls him in and we know that his father John has died. We see the funeral and then the reception at the Blythe homestead. During the gathering, Marilla notices a top hat on top of a cabinet and has a memory of her and John in their youth. From this flashback, we learn that John and Marilla were an item. We see John being silly in front of Marilla or Mar has he affectionately calls her. John even gives her a blue ribbon for her hair. When Marilla wakes from her reverie we see that Anne now wears that blue ribbon. Later that night, we see Marilla look over old love letters that John has sent her including one begging her to reconsider her rejection of him. When Anne asks Marilla why she never married, she tells her that her family needed her after her older brother, Michael died. This is something that I think this series has done right. Marilla’s relationship was merely hinted at in the books and the CBC miniseries so it is nice to see an exploration of this. Also, I thought it was a nice piece of foreshadowing that Anne sports the ribbon that Marilla was given by John Blythe knowing that she and Gilbert will eventually marry. Later on, Marilla and Gilbert have a nice moment at his father’s graveside sharing memories of John.

Back to the funeral reception, Gilbert approaches the door but can’t bring himself to come in. Anne sees this and goes to him to try and make him feel better. Anne talks about her experience being an orphan but makes a mistake saying that Gilbert was lucky in a sense that at least he got to know his parents whereas she didn’t. Gilbert isn’t happy that Anne made this all about her and storms off. Anne is not happy at being brushed off by Gilbert for trying to help and is letting out her frustration at her clubhouse. Aunt Josephine hears this on her walk and the two have a talk about relationships. Anne seems inspired by Aunt Josephine and calls her her role model (she also calls Marilla and Matthew her role model too). We also learn that Aunt Josephine never married but lived with her best friend/kindred spirit for decades and she recently died. The show seems to imply that Aunt Josephine was in a same sex relationship but one that made her very happy.

As usually what happens when someone suffers a loss, people tend to bring food to the family. So Ruby, Diana and Anne decide to make Gilbert a Shepherd’s Pie. Ruby is all excited and nervous at giving the pie to Gilbert in hopes he likes the treat. Also, Diana and Ruby think Gilbert has gotten more handsome in grief. Anne refuses to contribute but then breaks down in tears when she realizes the grief that Gilbert is experiencing.

When the girls bring the pie to Gilbert, Anne wants to turn back but Ruby grabs her hand and all three give him the pie. As Gilbert surveys the pie, Anne all of sudden bursts out how she would not make a great wife and runs out. Everyone looks confused and Gilbert thanks the girls for the pie.

At the Avonlea General Store, Matthew spies Gilbert there and offers to help with the farm work but at first Gilbert thought Matthew wanted to buy his land. Gilbert thanks Matthew for his kindness and mentions how he never wanted to be a farmer (we all know he comes a well-respected doctor). When Gilbert leaves, Matthew is paying for his purchases when he learns a ship went down off the coast of PEI (I think) and the ship wasn’t insured so the contents within are lost with no compensation. Matthew looks concerned when he hears this news and when back at Green Gables finds some paperwork and rushes to the bank. From the previews for the season finale, we learn that Green Gables is in trouble because of this. Also, one day, I am going to write a recap for this show and type Jasper instead of Matthew and not catch myself.

When Gilbert is on his way back home, Billy Andrews wants to know if Gilbert is coming back to school because Anne is starting to show off. Gilbert defends Anne by saying she is good because she is smart. Billy wonders where this attitude is coming from Gilbert and keeps on calling her bud. Gilbert can’t believe that Billy is asking what is wrong with him (Billy seems oblivious to the fact that he just lost his father). Gilbert then threatens Billy with violence if he should bully Anne again. The two get into a fist fight that Gilbert wins.

Later, we see Anne struggle with an apology letter to Gilbert. Anne runs to Aunt Josephine for advice. Aunt Josephine talks about being a wife doesn’t have to be one’s life but one can have a life via a career. Aunt Josephine mentions being very happy with her long-time companion. Aunt Josephine’s words seems to have clicked something in Anne in regards to Gilbert. We see Anne run to the Blythe homestead but finds that it has been packed up and Gilbert nowhere to be found. It does look like from this scene that Anne has embraced that she has feelings for Gilbert and was going to tell him so. Poor Ruby, she will be so pissed at Anne when she finds out that Anne likes Gilbert too.

So next week is the season finale. It will be interesting to see what part of the novel the show ends its season 1. Hopefully there is a season 2 as I’ve come to really like this version of Anne of Green Gables (but not as much as the CBC miniseries).