No ER means big problems at Hope Zion. Also in trouble is Maggie and Alex for performing surgery on Bree and bad news awaits Alex’s mom.

Dana comes in for her shift wondering why did she bother re-certifying herself to be a trauma surgeon if there is no ER at Hope Zion.

It is Zach’s last day and he is just finishing up some paper work and then will pack up his things and leave.

Hope Zion is now a urgent care facility and Thomas is showing it off to the board and introduces Cassie as the future Chief Surgical Resident. When a man comes in with chest pain, Thomas turns him away as Hope Zion isn’t an ER anymore. Of course this turns into bad news as the man later on runs his car in the ambulance bay pining Martin, an aspiring musician, who came to visit his drummer who had a drumstick impale his eye. Thomas calls an ambulance but things turn dire for Martin. Martin calls his mom to say how sorry he is of being a disappointment but then falls unconscious. Thomas promises his mom that they will save him. Cassie tells Thomas that he shouldn’t have done that. Martin is then rushed to the OR despite protests from Thomas.

In OR, Dawn blames Thomas through Cassie at why Martin is in dire condition and won’t let Cassie perform any surgeries on him. However, Dana convinces Dawn to let Cassie work on Martin. In the end, Martin ends up being okay and is paid a visit from his drummer.

Meanwhile, before the car rammed into the former ER, Zach was seeing Eli King, a First Nations man complaining of sweaty feet and light headedness. When Eli complains to Thomas how he is not feeling well, he assumes he is drunk and tells Eli to sleep it off. However, when Zach notices Eli’s shoes, he goes to his cubicle and seems him crumpled to the floor. Unfortunately, there is nothing Zach can do and Eli dies. Zach places the blame on Thomas for ignoring Eli because he put a stereotype on him. Eli was an insulin dependent diabetic and he was suffering from keto acidosis. Thomas blames himself too and knows that Eli’s death will be his legacy at Hope Zion. Thomas puts it on himself to tell Eli’s widow how breaks down in his arms.

As Dawn and Zach are packing away his stuff, Zach didn’t want to end his last day at Hope Zion with losing a patient. Dawn tells Zach that maybe it doesn’t have to be his last day that they should bring what happened in the former ER to the board. Zach can’t believe that Dawn would do that for him and tells her that he loves her. Dawn looks surprised to hear this but we don’t hear her say it back. This might be the first time I Love You’s were said between the two. 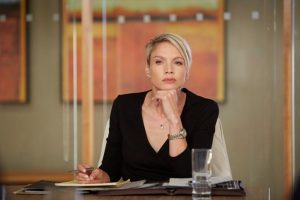 We learn that the woman that Charlie spent the night with is Rachel Carter, the lawyer who ended up taking the case representing Violet’s complaint against Alex and Maggie that could jeopardize their medical license. Violet blames Alex and Maggie for putting Bree in a coma.

Charlie is questioned first about approving the surgery and his personal relationship with Alex. Charlie thinks there is conflict of interest considering he and Rachel slept together but Rachel disagrees.

Bree’s spirit visits Charlie and she is pissed to see Violet putting everyone through this and tells him that Maggie has been the only one in her corner. Charlie tells Bree that this will all end if she just wakes up.

Later, Maggie is questioned and Rachel asks about her letting Bree stay overnight in the on-call room. Maggie says she only did that because Bree wasn’t feeling well after one of her chemo sessions and there were no beds available. This makes Maggie look bad and that she overstepped her bounds. Maggie admits to Charlie and the hospital lawyer that she may have but it was the right thing to do.

Maggie then tells Charlie that he didn’t get the full picture about Bree and that she did give her blood thinners. 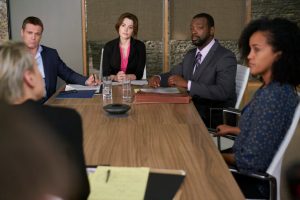 Alex is questioned next and Rachel wonders about her state of mind considering that day Luke and her mom were brought to the ER. Alex says that it had no impact on the surgery and that everything that occurred she would do again. 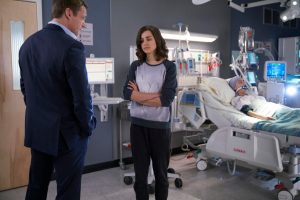 Bree is watching the proceedings and wants Charlie to stop all of the hard questioning. Charlie then follows Bree’s spirit to her body. Charlie learns that Bree is still in a coma because she fears being alone. Charlie tells Bree that she is a strong woman and she can handle being on her own. This gives Bree confidence to leave the spirit world and wakes up.

Maggie interrupts the questioning to tell Alex, Rachel and Violet the good news. Violet goes to see Bree in hopes of getting Bree back. However, Bree rejects Violet and then thanks Maggie for being there for her.

Sahir tells Alex the bad news. Martha has Creutzfeldt-Jakob disease. This means in 4-5 months time, Martha will be on a respiratory. Shahir did tell Martha the news but when Alex tries to broach her diagnosis to her mom, she seems more interested in playing with Luke. Shahir and Alex thinks that the disease has progressed because they believe she forgot the news. However, Martha didn’t forget but rather not think about it. Martha mentions wanting to see her son Luke. But Alex has to remind Martha that LUke is her son and she named him after her brother. Martha understands that and says that when she dies, she will see Luke again. Later, Martha tries to leave Hope Zion and refuses to listen to Alex. However, after seeing Alex spring into action to save her hospital roommate, this seems to get Martha to stay.

After the events of Alex’s day are however, she tells Charlie about her mom’s diagnosis and is taking a few days off to spend with her. Charlie agrees to watch over Luke. Alex then pays her mom a visit and suggests the two take a trip together just the two of them. Meanwhile, Manny goes to Alex’s office for their mini-golf date but finds she isn’t there. Manny seems to understand and walks away.

Back at Alex’s apartment, Martha is packing for their trip that seems to involve being in the sun. Alex is in the washroom crying and we see why: she is pregnant! So they did decide to write in Erica Durance’s second pregnancy.

This time, I have to believe that this time it is Charlie’s because I don’t think she slept with Manny yet. We just have to wait and see if we get another who is the dad story line again.