We finally learn all the whose in Savitar’s prediction. We know the one who will die (Iris) but we learn the member of Team Flash who betrays everyone and the one that suffers a fate worse than death.

At the top of the hour, Team Flash is training Wally to get faster so he can defeat Savitar and save Iris. After running against Flash and Jesse Quick, Wally is now fast enough to save Iris.

Lest we forgot what happened in the last episode, Barry popped the question to Iris and we learn that she said yes. Everyone is happy for the couple even Joe despite not pleased at Barry for not asking permission first. Barry’s excuse that his proposal was a spur of the moment thing.

Also, in the last episode Wally got a vision of Savitar and this week on the way to a rescue, he sees Savitar again this time he is getting thrown about. Barry sees Wally getting tossed about but no Savitar.

Back at STAR Labs, Barry is mad at Wally for not telling the group. Barry decides that he needs to talk to Savitar to see where he is at considering they all thought he is trapped in the Speed Force and can’t get out without the Philosopher Stone. Julian is asked to be a conduit for Savitar and he eventually agrees after Caitlin talks to him (and he gives her a kiss). 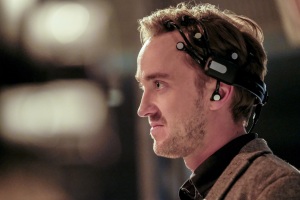 Julian as Savitar is quite menacing towards Team Flash and blames Barry for his misery. It seems that Savitar hasn’t been created yet in the present but will soon annd is an enemy of future Flash. Everyone gets the chills after their conversation with Savitar.

Meanwhile, Barry has benched Wally afraid that Savitar is spying on them through him. So Wally continues to train but is getting slower. HR says that Wally needs to get Savitar out of his head. Wally then gets the idea that in order to help Iris he needs to see the future so he knows how he can help. Cisco does Vibe him into the future and Wally sees his sister dies in Barry’s arms.

Another thing that Wally sees is that Iris is not wearing an engagement ring and knows the real reason why Barry proposed. Wally confronts Barry with this information and he admits that he thought asking Iris to marry him would change the future.

Iris isn’t pleased with Barry at this and wants to be left alone. Joe pays Iris a visit and tells her that she should believe in her love for Barry.

At STAR Labs, the team is at a lost until Caitlin admits to being the one that has betrayed Team Flash as she took a piece of the Philosopher Stone in hopes it would get rid of her cold powers. Julian isn’t happy at Caitlin for keeping this from him and also realizes the real reason why she asked him to be on Team Flash.

Julian is used once again as Savitar’s mouth piece to try and pin point Savitar’s location and they do get one and that he is is somewhere in Central City.

Back at the West home, Wally confesses to Jesse his fears about Iris and Savitar when he starts seeing his mom but it really is Savitar messing with his head saying he isn’t fast enough. Wally runs off saying that he has to stop Savitor.

Iris then talks to Barry that while she loves him, she wants him to propose out of love and not fear. Also, Barry can’t keep on saving her for eternity. Hearing that gives Barry an idea of where Savitar is. 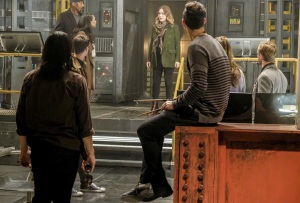 However, Jesse arrives to let Team Flash know that Wally is going after Savitar and he has taken the Philosopher Stone.

We see Kid Flash confront Savitar who taunts him. But Kid Flash manages to open up a portal and throws the Philosopher Stone in it. This causes some sort of energy spike that lets Barry know where Wally is.

By the time Barry arrives, he sees Wally being sucked into the portal unable to save him. Out of the portal comes Savitar who tells Barry that Wally has taken his place in speed force trapped there for eternity.

Barry and Savitar fight and Savitar stabs him the shoulder letting him live so he can see Iris die. 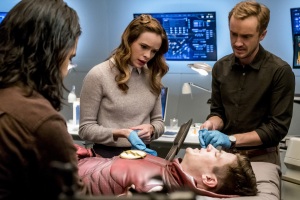 At STAR Labs, Caitlin takes out the piece of Savitar blade that Cisco takes to examine.

Barry is fine but is devastated at Wally’s fate and also sees that Iris is no longer wearing her engagement ring.

At episode’s end, Barry is so despondent at everything that has happened.

And I guess Central City needs to change their welcome sign again from Home of the Flash and Kid Flash just to the Flash again. Let’s hope that Barry can bring Wally back.

From the looks of it we get to see Eddie back in some sort of vision.