It’s part 2 of our two-part gorilla The Flash adventure. HR has decorated the Speed Lab to not only celebrate the defeat of Grodd but also Friends Day (Earth-19’s version of Valentine’s Day).

Cisco laments to Caitlin his bad luck with love when all of a sudden Gypsy appears through a breach attacking Cisco and Barry. Luckily, Harry uses a stun gun to knock Gypsy out.

In the pipeline, Gypsy doesn’t remember what happened and only that she was on Earth-2 to catch a breacher. Team Flash realizes that Grodd has used Gypsy to open up a breach and that Grodd and his army are on Earth-1.

Team Flash in unable to find Grodd and his army. Harry enhances Cisco’s vibe gear to see if he can vibe as to where Grodd will be so the team can get ahead of him.

Cisco goes see that Grodd and crew will be at a certain intersection. Cisco asks for Gypsy’s help but she declines as Team Flash seems to have enough members that can take down Grodd. Gypsy only wants to go back to Earth-2 to complete her mission but also talks about only seeing death and destruction when Grodd took her over. So Cisco lets Gypsy go.

At the intersection, the Flash, Kid Flash, Jesse Quick, Joe and a squad of CCPD are ready to take on Grodd. However, Grodd takes over Joe who threatens to make Joe kill himself. “Joe” pulls the trigger but the Flash manages to move the gun enough that the bullet just grazes Joe’s forehead. The Flash realizes that this was all a distraction to Grodd’s real mission which was kidnapping a General Matthew McNally. Grodd takes over McNally’s body to gain entry to Fort Reynolds and its nuclear arsenal.

Back at STAR Labs, Team Flash wants to use the connection Grodd had with Joe against him. Using magnets on his brain to retrieve those memories, Joe draws a picture of McNally. This picture lets Team Flash know what Grodd wants with McNally. 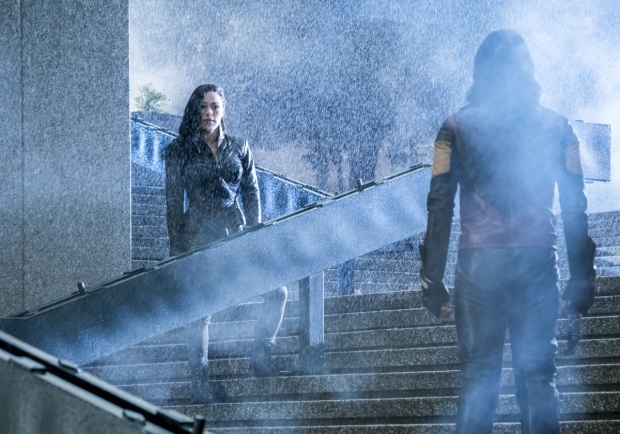 Another way is figured out. Barry asks for Cisco’s help in recruiting Gypsy. Our trio of speedsters arrive at the intersection from earlier. Grodd and his army is ready for a fight. The speedsters all try and take down the gorillas but to no avail. Gypsy and Cisco arrive with some help and they’ve brought Solovar who is all battle ready. And in a pretty cool sequence we get to see Grodd and Solovar fight. Solovar wins and grants the Flash’s wish to show Grodd mercy by leaving him on Earth-1 while the rest of the gorilla’s return to Earth-2.

We learn that ARGUS is taken custody of Grodd probably cell mates with King Shark. Gypsy gives Cisco a good bye kiss before returning to Earth-19.

Back at Barry and Iris’, Iris comes home to a romantic set-up. Candles are everywhere and rose petals are strewn all over the floor. Barry emerges with flowers in hand and tells Iris that he forget one important thing with his fixation on preventing the future and that is making a future. Barry produces his great-grandmother’s engagement ring and tells the story behind it. Barry gets down on one knee and asks Iris to marry him but we don’t hear her answer.

In the coda, Wally and Jesse are watching Casablanca when Jesse feels like a Big Belly Burger. So Wally speeds away to get the grub but when he stops, he sees a vision of Savitar.