Flashpoint rears its ugly head this week in the Meta-Human of the week: Clive Yorkin and it is interesting to note in DC lore he doesn’t get a codename hence why Cisco doesn’t bestow a name on him.

So Yorkin is targeting cops that put him away in Flashpoint. However, the cops in the present timeline aren’t cops at all. One is a chef and Captain Julia Mendex is a jazz musician.

At first, when Joe, Barry and Julian arrive at the crime scene, the corpses look mummified. When Julian takes the first victim back to STAR Labs he and Caitlin see that it has turned to ash. Back at the restaurant where the first victim was found, Iris notes the restaurant is “Luigi’s”, the one where the headline notes would re-open in the future. Iris grows scared of the future where she dies is coming true. Barry promises that he will do everything in ins power to protect Iris but thinks she should tell Joe. Iris doesn’t want to tell Joe as he is excited for everyone (i.e. Iris, Wally and Barry) to meet Cecile and her daughter Joanie and would blow it off because of his worry for her. 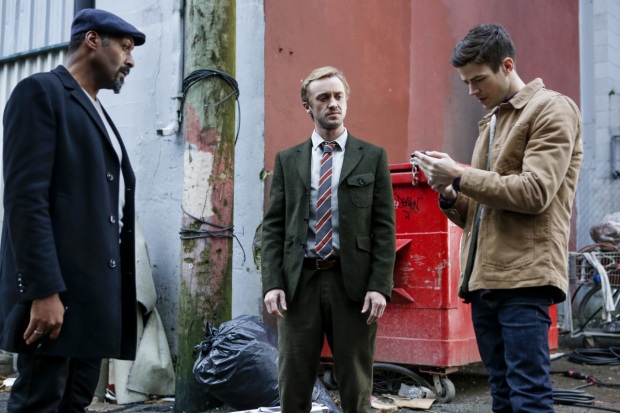 When Mendez body shows up dead and Barry learns his name, he realizes the meta is targeting cops from Flashpoint. Barry manages to whisk Julian and the body to STAR Labs to investigate before the body turns to ash. Julian gets impatient with Caitlin for her slow pace and she sees how frustrating it is to work with Julian and his poor bedside and team player manner. There is abreak through though when Caitlin and Julian discover some meta-human DNA and remnants of the meta-human husk. Julian realizes that he created Yorkin while he was Alchemy.

At Jitters, the family meet and greet occurs where we learn that Joanie is a huge fan of Kid Flash while Cecile is on Team Flash. Everyone tries to get Joe to pick who is his favorite but he says he can’t choose. But coffee gets interrupted when Yorkin arrives hell bent on finding Joe. We see that Yorkin turns the tables at Jitters to ash and even the bullets that Joe fires at him turns to dust. Wally manages to get away and come back as Kid Flash and creates some wind to blow Yorkin away and saving everyone at Jitters.

Back at STAR Labs, Iris finally decides to tell Joe about her fated death at the hands of Savitar. Joe gets upsets at Barry, Iris and Wally for not telling him.

But Yorkin decides to target Iris instead as another way to make Joe suffer. Iris presses her panic alarm and Wally goes instead of Barry. However, Kid Flash wasn’t quite fast enough as Yorkin managed to touch Iris’ arm. 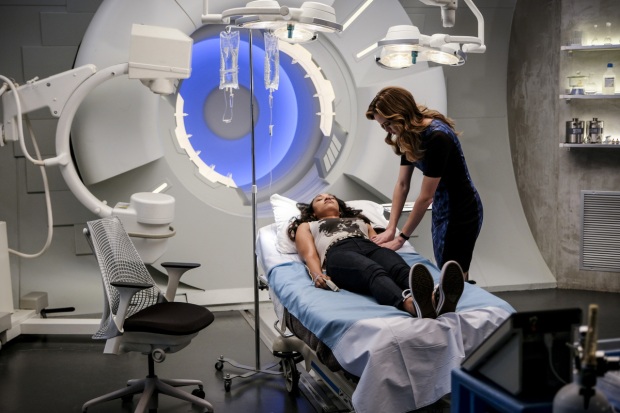 Iris is brought to STAR Labs and we see her arm quickly getting infected. The team realizes the way to stop the affects fo Yorkin’s powers from killing Iris is to freeze her arm. Caitlin doesn’t want to at first as she fears Killer Frost will emerge but Iris has faith that she won’t hurt her.

Wally is at the training room, blaming himself for what happened to Iris as he wasn’t fast enough. Barry blames himself as he hasn;t been the best teacher. You see Barry has been trying to teach Wally to become faster (they even had a race to see who as faster – spoiler alter: Barry) but one thing that Wally can’t do is phase through objects.

Cisco arrives and says they know a way to find where Yorkin will be. Cisco figure if they vibe to Flashpoint they can see which cop Yorkin will target next. It works and we learn that Yorkin’s next target is Laura Stone who is a PI in this timeline. Joe goes off to warn Stone and she boards a train to Star City while Yorkin sees them board.

Back at STAR Labs, Iris’ infection is growing and Caitlin has become Killer Frost ready to let Iris die. Julian manages to get Caitlin back saying that she can fight the Killer Frost within as she is much stronger than him as he couldn’t fight off Savitar’s influence. Caitlin comes back and resumes freezing her arm. 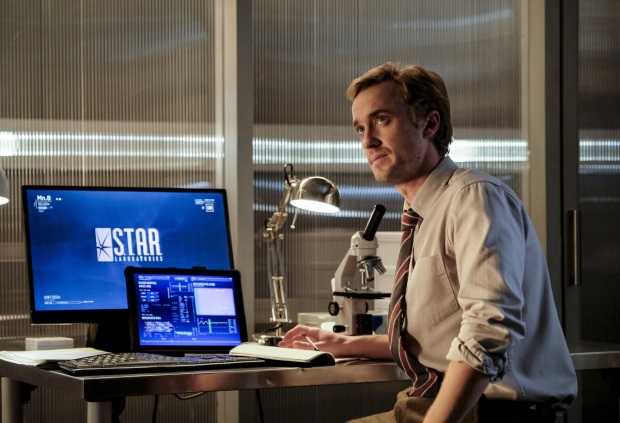 Meanwhile, Julian has figured out a way to reverse the affects of Yorkin’s powers and that is to inject him with the blood of a speedster.

On board the train, Stone yields Joe’s warning and we see that Yorkin has collapsed part of bridge onto the train tracks. Joe presses his panic alarm. The Flash and Kid Flash arrive. The Flash phases the train so it will go through the debris while Kid Flash cuts himself and manages to phase through Yorkin to neutralize his powers.

An antidote is found and Iris will be okay. Caitlin thanks Julian for getting her back and the two go out for drinks. Joe makes plans for Joanie and Cecile for them to re-do the family meet and greet.

At Barry and Iris’ loft, she tells Barry that she used to separate Barry and the Flash but after everything that she went through she sees them as one and loves every aspect of him.

In the coda, Wally is practicing his phasing when Jesse Quick arrives from Earth-2 to say that Gorilla Grodd has captured her dad and taken him to Gorilla City.

And someone how Gorilla Grodd might make his way to Earth-1 thus fulfilling another future headline.