Just kidding. But it is true the Martians did come to National City and they are looking for M’gann as she is being hunted to being a traitor during their war/genocide against the Green Martians.

J’onzz is so concerned about M’gann that he has been following her around in different guises to ensure her safety. M’gann tells J’onn that she will be fine. However, a White Martian attacks the two and it looks pretty bad until Suprgirl intervenes and the White Martian escapes.

The White Martian returns to M’gann’s bar in the guise of a human approach M’gann. His name is Amrek and he is M’gann’s mate and is tasked to bring her back. 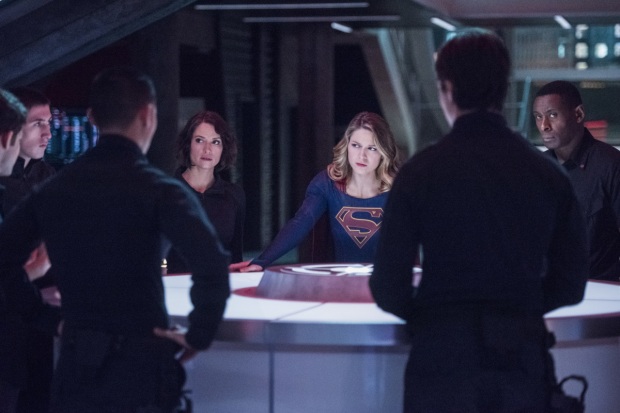 This causes M’gann to flee but J’onn stops her and says she has friends who want to help and protect her. M’gann agrees to go to the DEO for safety. Once there, Winn is having a hard time trying to track the White Martian but things get confusing when another M’gann arrives. The M’gann that was with J’onn is the White Martian. Confusion erupts and the White Martian escapes forcing J’onn to lock down the DEO. This creates mistrust all around because the White Martian could have shape shifted into anyone.

J’onn devises a test to out the fake. Lighting up a bunsen burner, everyone takes their turn near the flame. The flame will expose who is a Martian and we learn that it is Winn who uses the flame to make his escape and uses Winn’s tech brain to start the DEO’s self-destruct mode. The team realize that the real Winn is trapped somewhere in the DEO which how the White Martian is able to tap into Winn’s memories and intelligence.

The team splits up to find Winn so they can find him to stop the core from exploding. 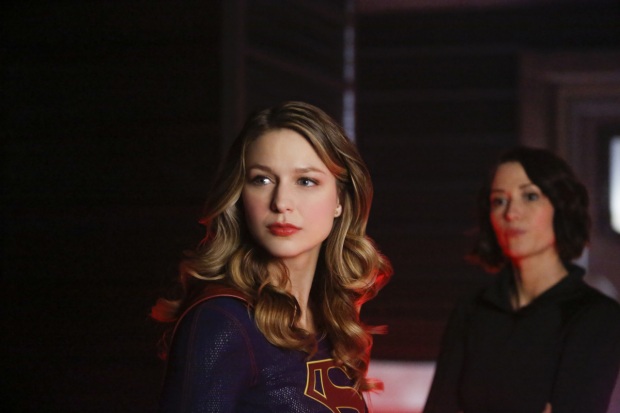 As Alex and Kara comb the DEO, the two sisters talk about Alex wanting to spend time with Maggie at a Barenaked Ladies concert instead of celebrating Kara’s Earth birthday, which they always do. Kara shares her sense of abandonment not just Alex but her parents sending her to Earth. However, we soon learn that Alex isn’t Alex at all but another White Martian as M’gann and J’onn not only find Winn but Alex too.

Before J’onn and M’gann find Alex and Winn, J’onn shares how he has come to care deeply for M’gann. It is like a declaration of love and he never thought a White Martian would fill the hole in his heart. J’onn says it is M’gann strength, spirit, selfless nature that he has fallen for.

Supergirl battles White Martian Alex while Winn is brought to the core to stop it from blowing up. Meanwhile, J’onn and M’gann team up to take on Amrek. The two turn into their Green Martian form. Amrek is disgusted at M’gann for taking on the guise of a Green Martian. When Amrek pins down J’onn almost choking him to death but M’gann stabs Amrek saving J’onn. Meanwhile, Kara does take out the White Martian who resumed its original form and with 12 seconds to spare Winn stops the core from exploding.

In the aftermath, Alex goes to Maggie, Winn goes to James to see if he needs some man in the van help (and gets Kara’s reluctant blessing to continue on his vigilante work) and J’onn and M’gann have their own conversation leaving Kara alone.

And just as I was so happy that J’onn and M’gann are going to be a couple, M’gann announces to J’onn that she is going back to Mars to hopefully find other White Martians like her. J’onn worries that M’gann will get killed as soon as she goes back. M’gann says it may be the case but she needs to try and also she feels the same way about J’onn. The two share a final mind bond and M’gann is gone. I really hope this isn’t the last time we see M’gann or Sharon Leal just when her story was getting good.

Kara is back home watching a classic movie when Alex arrives with a birthday cupcake in hand. Alex apologizes to Kara for blowing her off for Maggie but Kara tells her sister that she should be spending time with her girlfriend. Alex then correctly surmises that Kara was pouring herself into plans for Earth birthday to avoid her feelings for Mon-el. Earlier, Kara paid Mon-el a visit at the bar to tell him that she doesn’t like him in that way and there is no way that she would fall for someone like him. Mon-el seems to take Kara’s rejection in stride.

Kara seems to take Alex’s words to heart and seems read to confront her feelings for Mon-el when she happens to run into him at CatCo. Unfortunately, Mon-el is on a lunch date with Miss. Tessmacher. Mon-el tells Kara that since she doesn’t return his feelings he has decided to move-on. Kara looks crestfallen because she was about to tell Mon-el that she returns his feelings. I have a feeling that the show is going to drag out those two till the end of the season but I really do see the crazy chemistry between the two.