To echo one Ms. Felicity Smoak “Best team-up ever!”, this week’s The Flash is when the massive cross-over event starts.

And we start with Oliver and Barry hiding from an attacking the Atom, Firestorm, Heatwave, White Canary, Speedy and Supergirl. Oliver is super pissed at Barry for always getting them in a bind when asking for his help.

We go go back 10 hours and we see the STAR Labs team continue to test Wally who is exceeding anything Barry has ever done when he first got his speed. Iris and Joe are worried about Wally wanting to jump ito superhero mode right away and then getting himself killed.

Everyone gets called back into the Cortex to hear HR’s plans for the STAR Labs Museum but it gets interrupted with an alert of a meteor barreling to Earth. When Barry goes to investigate, he see it isn’t a meteor but a space ship and out comes a whole bunch of aliens.

The next day the DOD is blaming the meteor that came down as a DOD plane that crashed. However, Lyla tells Barry that ARGUS knows what crashed down.

At STAR Labs, Lyla tells Team Flash that the aliens are called Dominators and have come to Earth before like the 1950s. They disappeared for a while and only reappeared three months ago when four ships entered Earth and came with a threatening message.

Team Flash knows that Barry can’t fight the Dominators alone and he says he isn’t going to. So Barry speeds to Star City and saves Oliver and Diggle from being shot down by Vigilante. Barry speeds the two back to Felicity’s apartment. Diggle starts to throw-up after coming out of super speed and tells Barry that his life was normal before he met him. Barry then tells Oliver, Diggle, Felicity and Thea that he is up against aliens and he needs their help. Everyone is on board, even Thea who is coming out of retirement so she can battle aliens.

At a STAR Labs hangar, Team Flash is waiting the Legends to arrive. When the Waverider appears, Diggle can’t believe what he is seeing with his eyes. Diggle always has the best reactions to seeing things that are unbelievable. 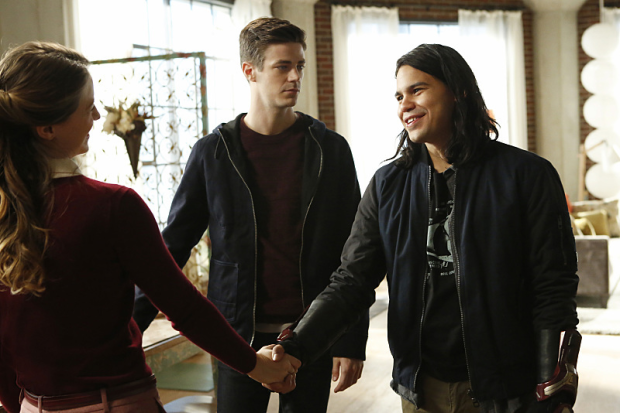 Barry and Cisco go on a side mission to grab an alien to help fight aliens. We then get a repeat of the scene at the end of last night’s Supergirl with Barry and Cisco arriving on Earth-38 to get Kara to help.

When the two return with Supergirl in tow, Barry introduces her to the team. Jax wants to know what makes Kara so super so she flies in the air and uses her heat vision to carve her family crest in the floor. Diggle proclaims that he is convinced.

Kara goes through the roll call and gets everyone’s names correct along with their call signs. The team gathers to find out what is the plan of attack. With so many cooks in the kitchen, Ray suggests they nominate a team leader. Cisco nominates Oliver but he suggests Barry instead since he brought everyone together. Cisco relents and we see the tension between the two continue to build. Barry tries to formulate a plan but really it is Oliver’s plan and that is the team will train by battling Supergirl. Oliver tells Supergirl not to hold back with the team as that is the only way they can learn.

Elsewhere, Ray is showing off his Atom suit to Cisco who suggests helping him upgrade it. When Barry arrives, Cisco quickly leaves. Barry then asks after Snart and Ray has to tell him about the sacrifice he made back in season 1 of Legends of Tomorrow.

Wally comes to the hangar wanting to join in the team-up but Iris tells him no and to go home as he doesn’t understand how dangerous the mission is. Later on, Wally sees that Joe and Iris don’t believe in him and wants to have the Flashpoint life where he and Iris where a brother-sister crime-fighting duo. Wally then asks HR to help train him but he declines.

Later, Martin and Jax asks to speak to Barry alone but Oliver is present so all of them retreat to the STAR Labs van to hear Barry’s future message. The message is warning Rip not to trust him as he changed the timeline ruining many lives. Barry is forced to tell everyone in the van about Flashpoint and all the changes that occurred in particular Diggle having a daughter in the previous timeline. When everyone leaves, Martin starts to have visions of that woman he had in the last Legends episode. So Martin enlists Caitlin to go to his home. When they do, the woman answers and she calls Martin Dad. Martin at first taken aback but quickly tells his daughter that he loves her and to give her mom his regards and then leaves. Pretty sure we will get more of this on Legends.

The team are training with Supergirl who pretty much is kicking their asses, which Sara kinds kind of hot.

Meanwhile, the President of the United States (Jerry Wasserman) is being briefed about the Dominators and doesn’t heed Lyla’s warnings and leaves. A man who I will call Doc. Cottle because he is played by Donnelly Rhodes, berates Lyla telling her he should follow her lead. Unfortunately, the President is kidnapped by the Dominators. Side note: When I saw the president was a man, I thought the show got something wrong then realized that Wonder Woman is the president on Earth-38 and not this Earth.

Back at the hangar, the team is still training when Cisco comes in with the message from future Barry that he found in the STAR Labs van. This force Barry to tell everyone about Flashpoint and Diggle gets upset at Barry for erasing a daughter. Lyla alerts Felicity that the president has been kidnapped and the team goes to save him without Barry, who bows out of the mission. Oliver thinks everyone is being ridiculous and wants Barry to be part of the mission. The team doesn’t seem to relent so as a compromise, Oliver and Barry stay behind while Supergirl leads the team. 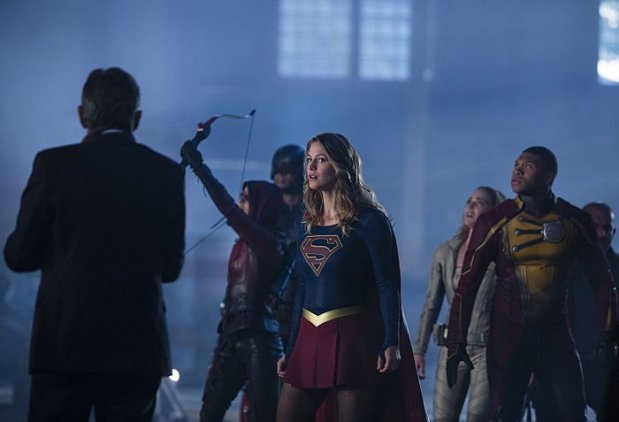 When Team Super Arrow Legends arrive, Supergirl uses her x-ray vision to confirm the president is inside. Kara and Mick get into a funny exchange about his backstory and how he refuses to call her Supergirl or Kara but will call her Skirt.

As Team Super Arrow Legends enter the building they see the president tied up and make to rescue him when one of the Dominators arrive. This alien tells the team that the president wasn’t their target but something to lure them to their location. The Dominator kills the president and turns on a device that mind controls are team.

Back at Harrison Well’s time closet, Barry is looking at the future news article about his disappearance. Barry tells Oliver that he really messed things up by changing the timeline that even the article is written by a Julie Greer when originally it was written by Iris West-Allen. Oliver tells Barry that he understands the need to see his parents alive again. Oliver would do the same thing as Barry did. Oliver then relates how his father and mother died: one at his own hands and the other by the sword of Slade Wilson.

Barry and Oliver try their best to hold off all of them but they know it is futile until they can figure out how to stop the mind control. Wally sees they need help and rushes out and knocks down Ray, Thea, Mick and Sara (I think) and looks pleased at his handiwork. But Supergirl knocks him out. Oliver takes Wally through a tunnel to get him back into STAR Labs all the while fighting Diggle, Thea and Sara. Meanwhile, Barry lures Supergirl to where the mind control device is at so she can help destroy it. Barry challenges Kara to a race and as the two race through Central City, they do wind up in the salt mines where eventually Kara does destroy the mind control device.

Wally is alright and Joe and Iris are not happy with him for his stupidity. But HR has changed his mind and decides to train Wally.

The team then declares to Barry that they trust him and will follow his lead. As the team makes their way back inside to decide their next course of action, Sara is whisked off by a beam of light, followed by Diggle, Ray and Thea. Barry is unable to stop Oliver from being whisked off too.

To be continued on Arrow.