I can’t help but think of the Smallville season 6 episode “Combat” in which also featured an alien fight club in which Clark not only had to fight Lois but a Phantom Zoner.

What leads our characters to this fight club is a dead alien body that Maggie calls in Alex. The body has a lot of battle scars on him and when Supergirl is called in on the scene, she notices the fireworks sparking between her sister and the NCPD detective as the two discuss the case. A clue on the body points to another alien that Winn managed to track down. When Maggie and Alex goes to confront him, he gets defensive and tries to run. When Maggie and Alex manage to capture him, they get subdued by thugs who whisk the alien away.

Eventually, Maggie leads Alex to the undeground fight club run by Roulette. The two women are all dressed up wearing masquerade masks surrounded by high rollers like congressman and hedge fund investors.

The first fighters on display is the alien Maggie and Alex tried to capture and M’gann Morse who is known as Miss Martian, and transforms into her martian self to kick the guy’s ass. Supergirl crashes the fight and Roulette is pleased at the night entry and pits her against Draga, a hulking 7 foot alien that does kick her ass. Alex and Maggie fires shots into the sky to put a stop to the fight and everyone scatters.

Back at the DEO, Alex and Kara has to deal the bad news to J’onn that M’gann or Megan was one of the fighters at the fight club. J’onn has been trying to connect with Megan considering they are the last of their kind. Megan shares how she managed to survive and J’onn wants to create a bond with her that Megan refuses. The bond is more of a sharing of minds that allows Martians to communicate honestly with each other. J’onn figures the fight club is the reason why Megan didn’t want to undergo the bond. When J’onn goes to confrtont, Megan makes no apologies to what she does at night and how she makes money in order to survive.

Meanwhile, Winn is testing what sort of powers that Mon-el has and we discovers that it is just super strength and the ability to leap tall buildings in a single bound. Mon-el feels trapped at the DEO as J’onn wants him to stay until they get a better understanding of his powers. However, Mon-el manages to convince Winn to let him go outside and the two men go out to a bar for a few drinks that leads to a small bar brawl that Winn stops before things get out of hand. We also see how Mon-el ended up on Earth in a Kryptonian pod and that is because the prince he was protecting as a member of the Royal Guard tricked him into getting into the pod that lead to his survival.

Also, Kara and Mon-el are still at odds because of their warring home worlds. It doesn’t really help when Mon-el comments how hot Alura is to Kara. With all the things happening with the fight club and aliens versus aliens help Kara come to an understanding with Mon-el and she tells him that she will work on being less standoffish with him. Mon-el also gives Kara a tip on how to defeat Draaga and it like from The Karate Kid meaning “sweep the leg”. Later, Kara takes Mon-el under her wings and offers to train him. I am really getting a West Side Story vibe with these two where two people from warring planets find love to make peace between those two worlds

When Kara learns of Roulette’s identity she confronts her and tries to get her to stop the fight club but she refuses saying she is helping the aliens.

When J’onn had a chance to think things over, he goes to Megan to apologize and when it looks like Megan is about to accept J’onn olive branch, we see it is a ruse for Roulette to capture him to have a Martian versus Martian battle.

Alex and Kara figure that Roulettte has J’onn but when Kara goes to where the fight club was previously located, it is empty. Not knowing where else to go, Kara, in her human guise turns to Lena Luthor for help in locating Roulette because as a Luthor she runs her clientele’s circles plus they went to boarding school together. Lena provides Kara with the address of the fight club and Kara says she owes her. Why do I think this show is setting up Kara and Lena to have a similar friendship that Clark and Lex had in Smallville that started out as friendship but soon turned to nemesis territory. 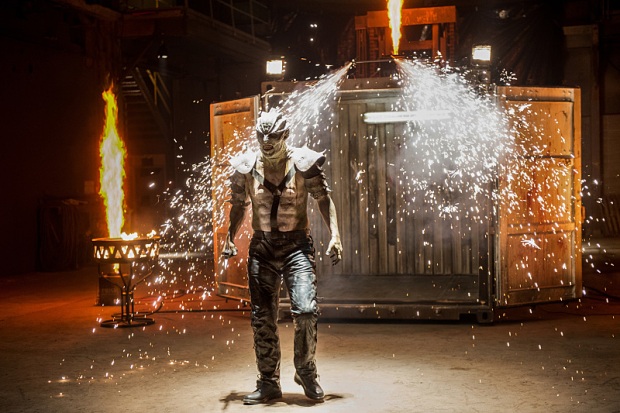 At the new fight club, Roulette wants J’onn and Megan to fight to the death so one of them is truly the last of their kind. J’onn refuses to fight while Megan reluctantly fights for her survival. Megan and J’onn transform into their Martian selves and Megan is beating up on J’onn and when he tranforms back into his human guise tells Megan that she doesn’t have to fight any more as punishment for surviving. This gets Megan to stop and refuse to kill J’onn. Roulette figured that was going to happen and sics Draaga on the two. 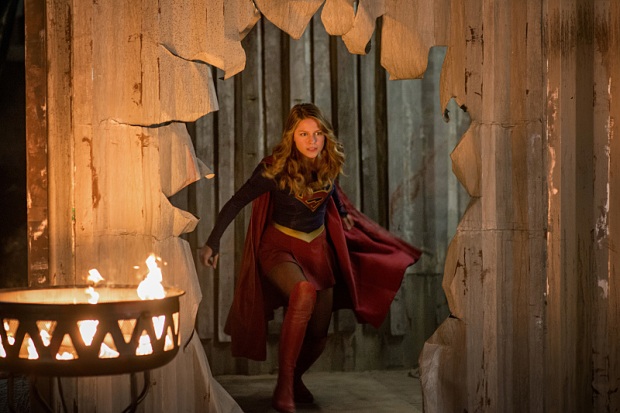 Supergirl arrives and thanks to Mon-el’s tip, sees the weakness in his knees, hit him there and knocks him out. The DEO and Maggie arrive and chase after Roulette. Some of her alien fighters go to protect Roulette but Kara arrives and says they don’t have to be at odds and shouldn’t let people like Roulette tell them that something is wrong with them but that they should be accepted. This gets the aliens to allow Maggie to arrest her. However, Roulette is let go because of orders from higher ups. Alex offers to buy Maggie drinks to drown their sorrows but she takes a rain check as she meets her girlfriend. Alex looks jealous at this. And the chemistry between Alex and Maggie is still off the charts that it is inevitable that these two will get together.

Kara also has a breakthrough at work. Kara pitches the alien fight club to Snapper but he refuses the story because she had no sources and did no research. By episodes end, she got her research and a source: Supergirl. Snapper is pleased at the source that Kara managed to procure. Of course sourcing yourself isn’t journalistically ethical. This reminds how in the comics Clark constantly used Superman as his source on all Superman stories to scoop Lois which frustrated her to no end.

J’onn returns to Megan and apologies for pushing to hard and offers to be there for here. When J’onn leaves, we truly see why Megan didn’t want to form a bond and that is because she isn’t a green Martian but a white Martian. Just as I thought because in the comics Megan is a white Martian but she ends up turning good. So will this version of Megan turn good?