The Legend that gets the honour of our opening voice over to explain the show is Nate and appropriate too considering he was front and center in this episode.

Considering the events of the last episode and Rex Tyler naming a time traveler as his murderer, it not surprising that Amaya has stowed away on Waverider taking out each Legend one by one to confront Mick who she thinks killed Rex because of his history. Before Amaya can deal the final blow, Nate comes to Mick’s rescue who become totally steel thanks to the Nazi super serum that Ray tweaked.

In her holding cell, Sara talks to Amaya and learns the details around Rex’s murder and determines that the time traveler they’ve been chasing is behind it. Amaya vows to stick around until she brings Rex’s murderer to justice

After learning that Nate now has super powers, Sara tasks Ray in training him on how to use his powers. Nate wants to be called Citizen Steel. We learn that Nate can access his powers if he feels threatened and when Ray starts shooting at him with his Atom suit, Nate goes all steel. The two are having a bit of fun with the training that unfortunately leads to them damaging the Waverider causing the hatch to open. Nate falls out and Ray goes out after him.

Nate and Ray land in 17th century feudal Japan. Ray is found and captured by Shogun and his men who then take him prisoner and also take Ray’s Atom suit.

Meanwhile, Nate is by Masako who brings him to her father, Ichiro, so they can care for him and hide him. We learn that Masako is bethrothed to the Shogun but doesn’t want to marry him. The Shogun’s men come to see Masako to be sure that no other foreigners are around. Masako says no but Nate comes out to confront them men and tries to play the hero but is unable to access his powers and gets stabbed for his trouble.

Nate apologizes to Masako for trying to help and while at first it looked dire for our historian, Ray’s serum cured his hemophilia and has stopped bleeding.

Once in feudal Japan, there are hilarious discussions on whether not ninjas are real (Mick and Sara say yes. Amaya says no) and also are able to track Ray’s suit to Shogun’s place and unfortunately find the samurai in the suit and not Ray. Sara challenges Shogun’s right hand man to a fight but it ends being a stale mate as Shogun starts using the Atom suit against them. The three flee and run into Ray who has escaped his prison.

While Nate is recovering, it looks like he and Masako are going to kiss when Sara et al arrive.

Nate tells everyone the history of Shogun and how he kills his wives and couldn’t leave Masako to that fate. The team knows that they can’t beat Shogun in the Atom suit but also knows Masako’s village is in danger. So Sara and Amaya bring the villagers to safety while Ray continues to train Nate so he can access his powers while Mick tells the team to wake him up when everything is over.

Ray trains Nate but he still can’t access his powers at will. Ray then tells Nate the way to defeat Shogun is to blow up the Atom suit while he is in it and shows him where on the suit to that. Ray is sad at the potential loss of his suit as it is the only thing that made him a hero.

A down on dumps Ray gets a pep talk from Ichiro and tells him a story about his son and how he confronted Shogun. Ichiro then gifts Ray with his son’s samurai suit 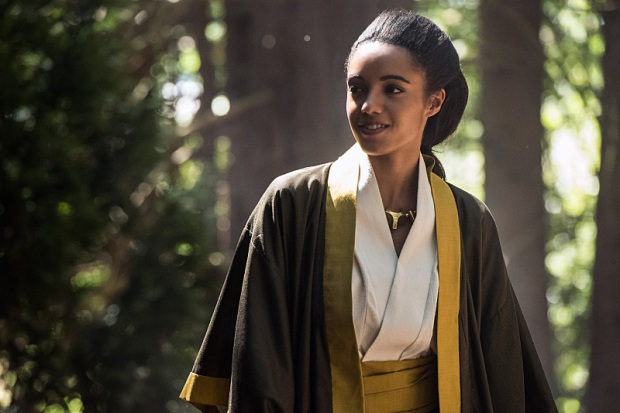 After getting the villagers to safety inside the temple, Amaya tells Sara about her necklace and the powers it gives her and how it was passed down by the women in her family. Amaya shares her fears about not being there to protect her village since left to join JSA.

After the failed training, Nate is worried about failing Masako. Masako says something about just using his powers and just don’t think. This prompts Nate to quote Yoda (do or do not, there is no try). Masako is impressed with the wide words of Master Yoda. Their talk is interrupted when Shogun and his men arrive/ Nate goes to confront him but still can’t turn his powers on and gets a blast from the Atom suit.

At the temple, Amaya and Sara fight off Shogun’s men trying to get to the villagers and Sara wants a re-match with Shogun’s right hand. Meanwhile, Mick saves Nate from another blast and is off fighting ninjas and soon joins Sara and Amaya in their battle. Sara eventually kills Shogun’s right hand man.

Ray, in his samurai suit, fights Shogun and attacks certain point of the suit to weaken him. But Ray gets taken down and Masako tries to kill Shogun but gets overpowered too.

Nate manages to access his powers and blows up the Atom suit killing Shogun and saving everyone. Ray is sad that his suit is gone.

As the team prepare to leave, Nate and Masako share a kiss goodbye and he gifts her with Shogun’s katana sword to say that her village now needs a protector. Ray asks Ichiro what is their family name and we learn it is Yamashiro who we know that one of their descendants is Tatsu Yamashiro who becomes Katana, who we met in season 3 of Arrow.

Back on the Waverider, Amaya tells Mick that she’s figured him out. Amayasays Mick like to pretends to be a meathead but he really does care for the team and has the makings of a hero. Amaya then gifts him with a throwing star as proof that ninja’s exist and Mick happily accepts the gift.

While the rest of the team is in feudal Japan, Jax and Stein stay behind to fix the ship and learn of a secret compartment. The two do find it but Jax is reluctant to open it because nothing good happens when you do (as he  learned from Lost). But they do open the door and find a stockpile of weapons. When the power comes back on they also find a voice message from 2056 Barry Allen. The voice message was only meant to be heard by Rip and not the rest of the Legends. When everyone returns to the Waverider, the two decide not to tell the team what Barry’s message was. What could be the message from a future Barry Allen? Whatever it is it obviously isn’t good news.

The team then gather and let the ship take them to their next destination wherever and whenever that could be but for sure their missions include finding Rex’s murderer and also finding the missing Rip in addition to repairing time abberrations.