It is no secret that I love all things Superman and in particular his relationship with Lois Lane. So I was quite excited to learn that Superman/Clark Kent (Tyler Hoechlin) will be making a two-episode appearance to start off season 2. 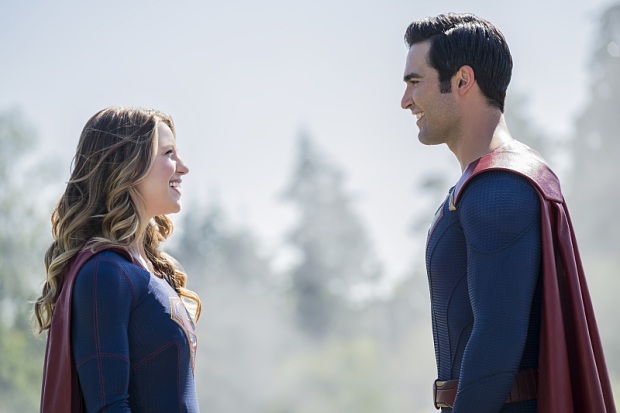 Before the Man of Steel appears, we pick up moments after the season 1 finale. Kara opens up the Kryptonian pod to see it contains an unconscious man (Chris Wood). Kara brings him back to the DEO’s new brighter HQ and he is in a coma. Kara believes he is a Kryptonian because of his impenetrable skin; Hank isn’t quite sure but that he is an alien. Alex wants Winn to help since he knows how to read Kryptonian so Hank tasks him to find out what his team at the DEO cannot. Winn accepts the challenge. Winn does discover the man’s ship went through the Well of Stars hence why he hasn’t aged.

Meanwhile, Kara tells Alex she and James are having their first date and despite denying that she is, Alex senses Kara is nervous about the date.

Kara is called in to the office by Cat despite not being her assistant anymore. Cat wants to know what Kara’s new career at CatCo will be. Kara says an online quiz says marketing. Cat doesn’t accept this choice and tells her she has 48 hours to truly decide. We then learn that Cat’s new assistant is one Miss Tessmacher, an ode to the character in the Superman movies.

Kara’s date with James in interrupted with news that the Venture suborbital space ship maiden voyage has gone awry. Also seeing the news story is Clark Kent in Metropolis who was mid-conversation with his editor Perry White. Side note: How nice was it to have Vancouver be Metropolis again for a minute.

Supergirl takes Superman back to the DEO and everyone goes gaga for him especially Winn how has a nerdgasm. Even Alex thinks he smells good. Also, Superman tells Alex that he will help her find her father Jeremiah.

But there is tension in the air between Hank and Superman. We discover that is because back when Superman was helping the DEO, one mission had the two discover Kryptonite (Hank named it). Superman wanted it destroyed but Hank decided to keep it to protect Earth from other Kryptonians. Alex isnt’ happy that Hank is keeping Kryptonite that could be used against her sister. When Hank and Superman do finally talk, Superman still refuses to work with the DEO as long as Hank is keeping Kryptonite. Hank says he would never use it against Superman nor Supergirl but Superman worries what will happen with Hank isn’t part of the DEO or if the President orders the use of Kryptonite. Seems the tension will remain between the two former allies for a while.

When Kara brings Clark to CatCo, he is reunited with James and Cat starts to drool over Clark (apparently Cat is always that way around Clark). Cat wonders if Clark is still dating Lois as she bet others on the Daily Planet staff that they wouldn’t last. Clark tells Cat that he and Lois are still together and going strong! Yeah!!! CLOIS exists in the Supergirl universe. Cat then asks Clark if Lois is still hung up on Superman but he says that Lois has room for both of them in her life.

Kara finds James to apologize for their date being interrupted and how she really wants them to work. James feels the same way too.

Alex then calls Kara to let her know that there was one missing person on the Venture’s passenger manifest: Lena Luthor (Katie McGrath), sister of Lex Luthor who is now in jail.

Meanwhile at a warehouse, we see a man buy high tech drones and speaks to someone on the phone saying how he has never let a Luthor down.

At LuthorCorp, Clark and Kara interview Lena about the Venture. Lena said she missed the flight due an emergency to organize a renaming ceremony for LuthorCorp. We learn that Lena was adopted and Lex was the only person who was nice to her. While Lena is distracted,  Kara and Clark x-ray the room but find nothing. Lena tells the two that she wants to turn the Luthor name around and is renaming LuthorCorp to L Corp and part of that is helping Clark in his investigation. Lena gives a USB that contains information about the oscillator, the part that LuthorCorp made for the Venture that exploded.

After the meeting with Lena, Clark receives a call from Lois all worried about him in National City. Clark assures Lois he is fine and being careful and the two exchange I love you’s. Kara wonders how Clark does it all: be Superman, Clark Kent reporter and Clark Kent boyfriend. Clark says it isn’t easy and it takes work. Clark realizes that Kara is struggling balancing everything in her life and tells her it is also just as important to be Kara as it is to be Supergirl.

Back at the DEO, we learn that the bomb was supposed to explode underneath Lena’s seat and that she was the target of the explosion. At a helicopter pad, we see the drones targeting Lena but Superman and Supergirl arrive to stop the bullets.

Vancouver filming side note: The helipad used was the same one that Smallville used in season 5, the episode where Clark saved Lois from the human trafficker.

A behind the scenes shot of Superman saving the family

The man behind the drones says that Superman and Supergirl can either save Lena or stop five drones targeting civilians. Superman goes to stop the civilian targeted drones and saves a family. Meanwhile, Supergirl saves Lena from the drones.

Back at CatCo, James senses something has changed in Kara and isn’t quite all in in giving their relationship a shot. Cat then tells Kara that she needs to stop being afraid of trying new things and move forward and tells her she has 12 hours to pick a new career.

Back at the DEO, a print off one of drones reveals it belongs to John Corben (in DC Comics he is also the villain Metallo). The DEO are dispatched to Lena’s renaming ceremony, which she refuses to cancel. Unfortunately, it is interrupted when bombs go off throughout the plaza and when goes off at the LuthorCorp building. It starts to collapse and Superman holds up the building while Supergirl repairs the building until it is safe.

Elsewhere, Alex fights Corben but he gets upper hand and Supergirl wants him to let her go and we learn that Lex hired Corben to kill Lena. Before Corben can act, Lena shoots him down.

The next day, Lena thanks Clark for writing a great news story about her. Clark apologizes for misjudging her but we all know that Lena is most likely like her brother. Lena wonders where Kara’s byline is and says she should think about being a reporter. At CatCo, Kara tells Cat she has decided her new career at CatCo is as a reporter as it allows her to help people and be the best person she can be.

Cat pulls put Kara’s resume when first interviewed and reporter is scribbled on it. Kara tells Cat that she always knows how to push people to be best person they can be. It seems that Cat is contemplating pushing herself in a new direction and the show is setting up for Cat’s departure from the show from regular to recurring status.

Also, Kara tells James that she needs time for be Kara and that the two are better off as friends. James says they will always be friends.

Back at the DEO, Winn  is now a full fledged member of the DEO. Clark decides to stay in National City for a few days as he didn’t realize how nice it is to be around someone like him, be around family. While Clark may know know things about Krypton from the archives and the Fortress, he wants to hear stories about his parents from Kara as it makes it feel more real. Alex then alerts the two about a robbery in progress and the Superman and Supergirl fly off to save the day.

In the coda, we see Corben in a lab and a women (Brenda Strong) tells him she can either kill him or keep him alive and he blinks that he wants to be alive. She injects him with some liquid and we learn he is in Cadmus labs and is now Metallo.

The season 2 premiere was amazing and can say that I no longer see Melissa Benoist as her character from Glee but definitely is Kara to me. I also love the addition of Hoechlin, who is perfection as Superman and love all the Clois too.

One bad thing is losing Calista Flockhart as a regular cast member, I am really going to miss all of the advice she gives Kara. Looking forward to what season 2 brings.