When asked about how much they knew about their characters, Panabaker said very little of her and The Flash universe. Once cast, Panabaker did as much research as possible but also wanted to “put own interpretation” on Caitlin.

Amell was asked to play Ronnie Raymond/Firestorm and had no clue who he was. While home in Toronto, he got a care package filled with tons of Firestorm comics. Meanwhile, Lonsdale originally auditioned for DC’s Legends of Tomorrow but instead got offered Wally West. Once Lonsdale got the part, he read a lot of New 52 comics on Kid Flash and watched Young Justice.

As for when Wally will become Kid Flash, Lonsdale doesn’t know but knows the writers will do a good job and is excited to see how it all plays out. And will Wally find out that Barry is the Flash? Lonsdale hopes so. “He is the only person that doesn’t know on the show.”

Talk soon turned to Code 8 the crowd funded feature film that Amell hopes to make with his cousin Stephen Amell. A short was shot to help kick off the campaign and it soon hit its fundraising target. 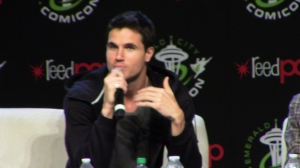 “I really wanted to work with Stephen. I got a taste during The Flash/Arrow crossover but didn’t have anylines together. With Code 8, we get to work together,” said Amell.

In addition, Amell announced at the panel that Victor Garber will e part of the Code 8 cast. “We are going to make something that you love with the people that you love.”

Even though his character is dead (a fact that Amell kept on bringing up during the panel), he would come back anytime if asked. If Ronnie does come back, he would prefer to come back as Firestorm than Deathstorm. “I love playing the Ronnie Raymond side of the character. To ground something as a real person is good on the acting side.”

Panabaker enjoyed playing Earth-2 Killer Frost “Good to do something different and be bad for a couple of episodes.”

As for the love life of Caitlin and Wally. Panabaker believes no actor would want to play her love interest since they all due. Lonsdale actually wants to see Wally’s comic book love interest, Linda Park, actually be part of the show. But Lonsdale added he hopes the show explores the spark tha Wally had with Jesse (Violet Beane) too.

On upcoming episode director Kevin Smith, Lonsdale said he brought such an energy to the set and Panabaker agreed and that his glee reinvograted the cast and crew.

On Carlos Valdes, Panabaker calls him her little brother and so proud to see how far along he has come since filming their Arrow guest shot that introduced their characters.

During the panel, Panabaker suggested that perhaps Wally’s Earth-2 counterpart could be the man in the iron mask. This is something I’ve theorized but now don’t think it is true since Panabaker wouldn’t drop such a massive spoiler during the panel.

As for how season two will wrap, even though he is not returning this season, Amell recently had dinner with executive producer Greg Berlanti and asked him to spoil everything for him and he did.

“You guys are in for an incredible stretch for season 2.”