SEATTLE – The Punisher and Foggy Nelson descended upon Seattle in two separate Emerald City Comic Con panels. Up first is Frank Castle aka the Punisher himself, Jon Bernthal. 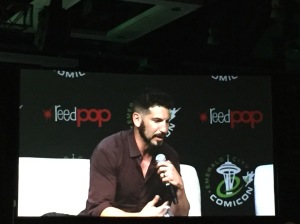 When he got the call about the Frank Castle role, Bernthal told moderator Clare Kramer that he knew a little bit about the character but one of the joys about finding out more and reading a lot of the comic books. Bernthal said the Punisher Max series was a major insipiration for him.

“There are so many great versions but my job is taking it all in and make it my own,” he said Bernthal. He added that he wouldn’t has played this part if he wasn’t a husband or father.

Bernthal noted the one of the best things about Daredevil are the “badass fights” and praised the fight choregraphers. Fight scenes on Daredevil.

Best things about the show. Badass fights. Best part of playing castle is whooping people’s asses in the prison Praised the fight choreographers. Berthal notes his prison fight scene is one of his favorites.

Bernthal describes season 2 as the Punisher’s origin story as at the beginning his only mission is to kill those that killed his family and not about saving Hell’s Kitchen. As season 2 progresses, Castle and Daredevil develop a mutual respect. Another thing that evolved was the Punisher costume as it went through different permutations but when Caste puts it on, he is putting it on for a reason.

As for that oft-rumored Punisher spinoff? Bernthal knows nothing about it but knows that Frank Castle is a part of him now.

“I can’t wait to see what is in store for him,” he added.

Henson told Clare Kramer that he had no clue what he was auditioning for and wasn’t familiar with the Foggy character. Nelson had to do his audition via a Skype call on his phone but he kept on getting phone calls and grew flustered. The more he got flustered helped him get Foggy.Aftger landing the role, Nelson was a new father and didn’t have time to do any further research. However, Nelson believes that lack of knowledge helped him not be so nervous about playing an iconic character.

Nelson pitched his idea that Foggy should be on other Marvel shows and at the end of season 2 sort of plants that idea. At season’s ends, Foggy meets Carrie-Anne Moss’ character from Jessica Jones. “There is a possibility for all these other characters to collide”.

In fact, Nelson would love if Foggy were part of the Guardians of the Galaxy universe. Another thing that Daredevil season 2 teases is Captain America: Civil War

As for working in New York City, Nelson calls it another character of the show. He also believes the show does a great job at humanizing the villains.

On co-start Charlie Cox “Charlie is very prepared, making sure everything is done right. It is inspiring.”

On Matt and Foggy’s relationship: “Foggy’s patience with Matt is running out. They want the same things but go about it in a different ways.”

He added that while Foggy seems to be going to some dark places in season 2 that he will always maintain his heart and ever the optimist, Nelson believes Foggy will find love.

During the panel, Nelson gets a call from Jon Bernthal asking to hang out. “That was the Punisher man. I know the Punisher.” He added that Bernthal and Elodie Yung have elevated the show and happy to have them join the cast.

While Nelson didn’t envision being part of the superhero world when starting out but is stoked to be part of it now. He finds being part of it bonding, and with Netflix added to the mix, it becomes a shared experience.