This week’s Arrow was filled with a lot of bee puns (and I mean a lot) and also a plethora of pop culture references from Alien (Curtis), Die Hard (Felicity), My Girl (Brie) and Independence Day (Lance).

And this episode had a bit more humor in it than others probably thanks to having a Flash villain and the always welcome presence of Donna Smoak.

The Return of the Bug-Eyed Bandit

Brie Larvan is using her scant 30 minutes of prison computer time to hack into the prison system to change her parole date to get her release much sooner than expected. The prison guard asks her what Brie is looking and she says she bees.

Meanwhile at the Arrow Cave, Oliver is training Team Arrow really hard as a way to deal with his breakup with Felicity. Thea tells the group that her only bruises are coming from Ollie’s training and not from catching bad guys. Laurel notes that the city has gone quiet since Darhk went to prison.

Speaking of Darhk, apparently Alex has an interview to be the campaign manager for his wife’s mayoral campaign. Thea is not liking that idea one bit but Laurel tells her that maybe Alex should apply for the director of PR job at Palmer Tech. Laurel is afraid to mention Felicity’s name in front of Oliver but he says that it is okay since she isn’t Voldemort. Thea is surprised that Oliver knows who Voldemort is and he defends himself saying he has read some of the Harry Potter books. Diggle is surprised that Oliver read the books and thought he just saw the movies. Oliver is surprised there were movies based on the books.

This is the third DC TV show in a row to have a Harry Potter reference in it. On Monday, Supergirl had Siobhan’s aunt calling her clients Muggles, on Tuesday, The Flash has Team Flash calling the time wraith a Dementor. I am wondering if Legends of Tomorrow will have one!

Back to the action. At Palmer Tech, Felicity and Curtis are looking over the schematics for her biochip that is in her spine. The two see how expensive it is to mass produce for the public and Felicity has to meet with the board about this and other matters. Donna arrives unannounced to get her daughter to talk about her breakup with Oliver. Felicity does not welcome this visit before the board meeting. Felicity also sees that Curtis is suffering from a really bad cold so sends him home. Thea also arrives to ask about the job for Alex.

As the board gathers to meet, one of its members arrives late but then starts to convulse and collapses. A swarm of bees comes out of his chest and Brie comes out spewing bee puns and asking to see Felicity Smoak.

Back at Felicity’s office, a video message from Brie arrives on Donna’s phone and Felicity’s computer demanding to see her or board members will die. A swarm of bees arrive outside of Palmer Tech to keep them in the building. Felicity has come up against Brie before and luckily for her the villain doesn’t know our favourite IT gal put her in prison.

A breaking news report comes across the TV about what is happening at Palmer Tech. Curtis leaves the loving care of his husband to go get Felicity help. At the Arrow Cave, Lance comes to say that Donna is also at Palmer Tech. Oliver notes that bees are swarming the building but robotic bees. Team Arrow suits up while Curtis finds his way to the Arrow Cave and faints when he sees that Oliver is the Green Arrow, Laurel is the Black Canary and doesn’t know who Diggle is. Lance quips how easy it is for people to find the Arrow Cave.

Once Curtis comes through, he is given some IV to help with his cold and give him a boost of energy to help Team Arrow. Curtis is too excited (and it is adorable) and enthusiastic when helping out our heroes. Curtis manages to hack the bees that will let Team Arrow get into Palmer Tech but unfortunately, these bees learn and adapt to any threat. One such way is the bees form a guy called Exoskeleton.

Back at Palmer Tech, Donna takes off her heels so she, Felicity and Thea can climb through an air vent to escape Brie’s bees. The bees have followed them as the trio witness Team Arrow’s encounter with the Exoskeleton. The three retreat back after seeing Oliver get stung by one of Brie’s bees. 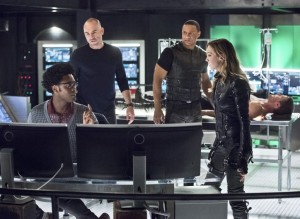 Oliver is taken back to the Arrow Cave where the bee in Oliver starts to clone itself. The solution is to use Laurel’s Canary cry to disrupt the bees and it works. Unfortunately, Curtis says they cannot use the Canary cry again because the bees will have adapted.

Brie sends another message to Felicity giving her a bit more time to meet her demands, which is the chip in her back.

Felicity uses the elevator to go to the old Arrow Cave and makes a stop at the conference room to rescue the board members. Felicity and Thea leave the board in the care of Donna so the two can take on Brie. Charlotte Ross’ reaction to this and her interactions with Emily Bett Rickards in this episode was pure comedy genius.

Back at the Arrow Cave, Oliver has recovered and Curtis is happy that he has helped and wants high fives for defeating the bees. Oliver isn’t happy that Curtis is all positivity considering Felicity and Thea are still trapped and reams Curtis out.

Laurel speaks to Oliver alone and tells him to ease off Oliver. Earlier, we had Laurel offering her ear if ever Oliver needs a person to talk to about his breakup with Felicity. Oliver then tells Laurel how he was happy with Felicity when they were in suburbia but was drawn back into the hero world because Felicity convinced him they could have it all. Laurel tells Oliver that he can be the hero without biting people’s heads off and that he needs to be the beacon of hope to the people of Star City.

Curtis has developed a worm that will infect Brie’s bees and gives it to Oliver in the form of an arrow where he needs to shoot it to infect one bee to take down the others.

At Felicity’s office, we learn that Brie wants the spine chip because she has a tumor on her lower spine that when removed with cause paralysis. Brie can’t afford the chip hence she wants Felicity’s. Felicity gives in to Brie’s demands and shows where she can get the schematics.

At her desk, Felicity manages to get into her computer to see her mom and the board made it out safely. However, while Brie was poking around for the schematics, learns that Felicity was the one that put her in prison.

In the Arrow Cave, one of the capture bees comes loose and starts to go after Curtis and Lance, which Lance takes down. 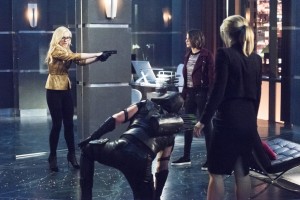 Later, Thea tries to convince Felicity to return to Team Arrow but she declines and realizes she can make a difference through Palmer Tech.

Back at the Arrow Cave, Oliver apologizes to Curtis for snapping at him and welcomes him back any time. When Curtis goes back home, Paul is mad that he took off like that. Curtis lies to where he really was and says he just wanted to help the police. And it looks like Curtis is making his way to become Mr. Terrific.

Basically, Reiter wants the idol back so he can become an unstoppable God. Oliver and Tiana try and stop him but he uses his powers to knock out Tiana. However, Reiter starts to lose the power of the life force he took and Oliver manages to knock him out. When Oliver goes to check on Tiana, Reiter has disappeared to look for the idol. Oliver and Tiana decide to rescue the prisoners before Reiter can kill them and take their life force.

Malcolm visits Darhk in prison to say his HIVE peeps have abandoned him and no one will be helping him out. We then see Darhk get attacked by fellow prisoners that include Murmur. However, later we see that Darhk gets Murmur on his side when the same prisoners try to attack him again. Murmur kills them as Darhk threatened his grandmother.

Later we see Malcolm meet with Darhk’s wild card to help get him out of prison and this person is Andy Diggle!