It looks like season 3 of Bitten will be an all out civil war between the Russian and North American pack as Jeremy decided to protect the Antonov’s after learning that they are Elena’s family.

But the episode begins with Jeremy at the hardware store buying supplies that include a tarp and cement to bury the wolves captured in the last episode. Greeting him at the parking lot is former Bear Valley sheriff, Karen Morgan, who has quit the office so she can live a quiet life. However, Karen can’t seem let the cop out of her when she encounters a Russian wolf acting all suspicious.

While burying the bodies, Clay lies to Jeremy about who Sasha is and passes off Elena’s coldness towards her Alpha about the number of Mutts being recruited to their pack. When Clay takes Elena to look at a house he is interested in buying for them, asks Elena to tell Jeremy about Sasha.

The Russian wolf is one of many that Roman has called in to help track down Sasha. To find out what Roman could possibly be up to, Marsden arrives at Stonehaven who explains how Roman’s pack works which is through fear and money. The one person that Jeremy should talk to is Roman’s second in command, Constantine. Nick goes to speak to him in a steam room and Constantine wants Sasha and from what he was saying, Nick gets the impression that they’ve been watched by Roman. 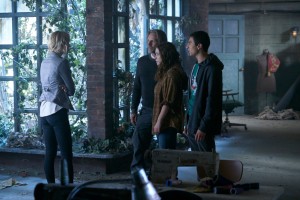 Meanwhile, Elena goes to where here family is hiding and gives them food and supplies. Elena tells them that she will ask Jeremy for his help in protecting them.

At Stonehaven, Elena does tell Jeremy about Sasha and his family. Jeremy is upset at Elena for not telling him and the fact that Sasha’s daughter knows all about their existence. Jeremy is also not happy that Clay knew about Sasha too. Jeremy tells Elena how he won’t help Sasha and gets put into a position when he learns that Sasha is Elena’s real father.

Jeremy goes to see Sasha and tells them that he won’t help protect him or his family. Elena asks for Nick’s help in securing new documents for her family and to let them hide in his house in Minnesota.

Katia and Alexei show up at Stonehaven asking for Clay’s help while Elena goes back to Sasha and sees that he is preparing to take on Roman. Elena learns that Jeremy won’t help him and she calls him. Jeremy says that he won’t start a war with Roman and won’t break his promise in bringing Sasha to him. Nick and Clay beg Jeremy to help Elena’s family but he refuses to budge and instead calls for a meeting with Roman.

After Elena gets off the phone with Jeremy, we see that she is being spied on by a Russian wolf. Soon Constantine joins this wolf and form a plan to take on Sasha and Elena. The wolf goes to attack Sasha but he manages to kill him. Constantine grabs Elena and threatens to slit her throat but she manages to get the upper hand and is taken captive.

At this meeting, Katia and Alexei are surprised that Clay and Jeremy have taken them to Roman. Roman is pleased at Jeremy for helping get Sasha’s family and is even more pleased when Sasha arrives with Elena. But, Jeremy tells Roman he isn’t turning Sasha and his family to them as his son, Constantine, threatened Elena.

So Constantine is now Jeremy’s prisoner and Sasha and his family are under his protection. And the war has now begun.