After going to the first tribal council of the season last episode and eliminating Darnell, the Brawn tribe arrives back at their camp with a few more issues than before. Scot asks Alecia if keeping her in the game was enough to prove that the alliance could trust her. The question is pretty absurd when you really think about it. Alecia was only one vote away from being voted out of the game so she actually has very little reason to trust Scot and the other members of her tribe. Alecia recalls hearing Jennifer and Jason (formerly known as Kyle) whispering at tribal about how unsure they were about keeping Alecia in the game. So even though her tribemates are going out of their way to make her feel like a valued member of the tribe, Alecia is still confused by why she received so many votes. As the tribe is getting comfortable to go to sleep for the night, Jason attempts to get a fire started. After a few moments, Alecia heads over to Jason to show him a different technique to starting the fire… it doesn’t work. Alecia determination to help with the fire is a little off-putting to the rest of the tribe. She’s doing more harm than good. Jennifer tells us that herself, Jason and Scot are starting to reconsider the way they voted. Kyle and Scot agree that Alecia will be the next one to go.

Debbie Does it All 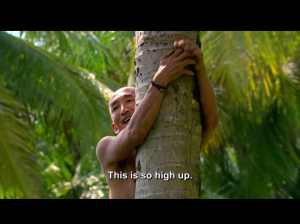 Tai has no idea where he stands within the Beauty tribe. He looks on as the other members of the tribe swim in the ocean together. In this moment, Tai decides once again to run off and search for the hidden immunity idol. He finds a clue to the location of the idol inside a whole in the tree. The clue says that the immunity idol is buried at the base of the tree. But after digging around the base he finds another clue to getting the idol. Tai figures that the key to the idol is high atop a palm tree. So he has no other choice but to climb the tree. Tai makes an impressive effort to scale the tree but to no avail. The tree is just too tall. Defeated, Tai has to climb back down the tree and hurry back to camp before of the Beauty tribe gets suspicious.

The Brains tribe is excited that they were able to win the last immunity challenge and some of the benefits to coming in first place in the challenge are kerosene and matches to start a fire. Liz wants to boil the well water so that the tribe can drink, but amazingly Debbie doesn’t see the point. After all, she has been studying water for 20 years or so she says. She reminds the tribe that they might not be able to handle the well water like she can because she has the immune system of a horse. Of course, she’s an animal expert too… she grew up around horses and cattle as well. Then Debbie talks about the 20 miles she was able to run as a personal trainer. Peter tells us that because Debbie isn’t exhibiting traits that indicate that she can actually win the game so he plans on keeping her as a close ally.

Back the Beauty Tribe, Caleb and Tai bond. Michele points out that although Caleb and Tai are total opposites they are having a very obvious “bromance”. Tai still has his mind on climbing the tree to retrieve the immunity idol but in the meantime, he needs to indoctrinate himself into the tribe and lay low for a while. It seems like Tai is trying to indoctrinate himself into Caleb’s good graces the most. He even attempts to steal a kiss from Caleb and the entire tribe bursts into laughter.

On day 5, the Brains tribe wakes up and notices that the kerosene is missing. It appears that Joe left the kerosene bottle laying on its side causing the fuel to leak out. Neal is worried that without the kerosene the tribe will have to drink the untreated water and get sick. Debbie and Joe are more concerned about the tribe’s lack of discipline. Liz is annoyed that it seems that not only did Joe waste the fuel but the matches have also gotten wet. Joe is equally annoyed at Liz. He thinks that she is book smart but she has no practical skills that are useful to survival. Liz’s attitude makes Joe feel like he’s at “Kindergarten Camp.” Eventually, Liz has to remove herself from the fire situation altogether to get some time to herself. The lack of clean water overwhelms her to tears.

The Brawn tribe can’t make a fire either so they aren’t able to maintain any strength. The sun is burning Kyle’s skin but he says that his experience in Afghanistan helps him withstand the heat. While the tribe is sitting in the shade, Alecia spends the next 5 hours trying to prove that she is useful by making a fire. It frustrates her to look up and see the two strongest members of the tribe sleeping peacefully in the shade. But after a while, Alecia is able to get the first flames to get the fire going so that the tribe can eat and drink clean water. Jennifer is impressed that Alecia didn’t give up and the Brawn tribe is much more confident going into the next immunity challenge.

Two in a Row

The tribes arrive at the immunity challenge and get their first look at the new Brawn tribe, minus Darnell. The next challenge includes the tribes racing down the river, retrieving a big log and carrying through a series of obstacles. The challenge ends once the first two teams make it through the obstacles and knocked down 2 targets with a slingshot. The winners also get fishing gear that can make providing for the tribe a lot easier. The challenge is long and difficult. The two most physically strong tribes, Beauty and Brawn take an early lead but by the end of the challenge, the race is pretty close. The Beauty Tribe finishes first and for the second time in a row, the Brawn tribe comes up short. The Brains manage to edge them out and win immunity sending the Brawn tribe back to tribal council to vote someone else out of the game.

After the second consecutive loss, the men of the Brawn tribe are back to laying around in the shelter. They pretty much just lay around and bash Alecia for the majority of the day. They feel like the majority alliance of Jason, Scot, Jen, and Cydney gets along well enough to move forward successfully without Alecia. But Jennifer tells us that over the past 6 days she has gotten less annoyed at Alecia and more annoyed at Jason’s constant complaining about Alecia. Knowing that she might be in danger, Alecia sneaks off to search for the hidden immunity idol. Later that day, Jennifer finally approaches Alecia to discuss strategy. The two decide their best move is to team up with Cydney to blindside Jason. The two guys can see the girls strategizing but when they question Jennifer she reassures them that the alliance of four is still solid. Later, Jennifer pulls Cydney to the side and tells her that she might be having second thoughts about betraying Jason and Scot. Cydney is confused as to why Jennifer is being so wishy-washy and going into tribal council, the vote still hasn’t been decided.

At tribal council, Alecia tells Probst that the tribe may have noticed that she has been pulling her weight around camp a lot more and she hopes that the tribe will choose not to vote her out. Probst then asks Jennifer about the different options the tribe has for making her vote. This is when the tribal council starts to get a little crazy. Jennifer tells Probst that the vote was still up in the air back when they were at camp. She even says that some of the conversations back at camp made a lot of sense to her and she had to consider her best options. This wouldn’t be so bad if she hasn’t already confirmed with her alliance that Alecia would be the one voted out. Scot says he now has to wonder where Jennifer’s loyalty lies. Jennifer then starts burying herself deeper and deeper by try to make up for her slip of the tongue. Scot and Jason start pressuring Jennifer about her loyalty wavering when Jennifer decides to throw Alecia under the bus. She says that Alecia brought up an all-girl alliance but Jennifer never had any intention of going through with it. She even admits that she brought up targeting Jason. Jennifer says that this moment is an absolute nightmare and she feels like she is being punished for trying to give Alecia false hope. Then Jennifer does something I’ve never seen before; she stands up on the bench towering over the rest of the alliance and pleads that they believe what she’s saying. Probst says himself that he doesn’t think he’s ever seen a tribal council like this one. It’s time for the tribe to vote.

Scot and Jennifer voted for Alecia but Jason, Alecia and even Cydney voted Jennifer out of the game. Jennifer got caught red handed trying to make a big move and imploded at tribal council like no other castaway has ever done. In a matter of minutes, she went from being in a great spot in her alliance to the second person voted out this season.