What do Barry Allen from The Flash, Oliver Queen from Arrow and Clark Kent from Smallville all have in common? It is that these men bear the weight of the world on their shoulders and turn them into broody people.

That is the consensus from all of Barry’s friends and loved ones throughout the episode. Barry is bearing the guilt of what happened on Earth-2 and it is affecting his mood and relationships on Earth-1.

We pick up immediately after the last episode episode ended and that is Jay being killed by Zoom and being sucked back into Earth-2. Caitlin is grief stricken while Barry wants the breach to be opened again so he can return. Harry tells Barry that all the breaches are closed forever. Jessie isn’t too pleased to hear that Earth-1 is her new home. Meanwhile, Harry tells Barry and Cisco that they cannot breathe a word about what happened on Earth-2 to anyone especially Caitlin, Joe and Iris. Harry doesn’t want them to feel influenced to their doppelganger’s lives.

At the West family game night, Wally is the fastest at stacking cups and when Barry is challenges, his morose mood puts a damper on things. Later, Joe asks Barry to meet up Wally so the two men can get to know each other. Wally comes over and gets Barry to look over his application to Central City University’s engineering program that involves developing a super fast engine. Barry offers some constructive feedback that Wally doesn’t take too well so he then offers to work on the application together. But the night ends when Barry starts to do some of Wally’s work for him (of of course King Shark too but more on that later). Wally is tired of hearing how great Barry is from Iris and Joe. So Barry tells Joe and Iris to stop telling Wally that he is perfect and putting him on a pedestal. Later on at Jitters, Joe is proud of Wally’s application and then tells him about how Barry came to be in their family. Joe tells Wally that Barry isn’t perfect but he is a son to him and is part of their family.

We welcome Diggle and Layla back to Central City as they’ve arrived at an ARGUS aquarium to deal with King Shark. It seems that the late Amanda Waller wanted to weaponize meta-humans like King Shark for their purpose and Lyla is trying to clean up her predecessor’s mistake. Unfortunately for the Diggles, King Shark has escaped and is after the Flash to kill him for Zoom.

Barry welcomes the distraction from what happened on Earth-2 and learns that King Shark is Shay Lambey, a marine biologist but his Earth-1 counterpart is dead. Earth-1 Dr. Lambey’s wife is also a marine biologist who specializes in sharks. So off goes Cisco and Caitlin to interview her at Nautilus Labs. While interviewing Tanya, she mentions research that could help and Caitlin is quite blunt in asking for it while Cisco uses a more gentle approach in getting it.

Meanwhile, Harry is tasked in finding a way to track King Shark. Jessie comes upon her dad working on tracking King Shark and offers to help.

Back at STAR Labs, Caitlin feels that Tanya’s research is useless. Cisco is worried about Caitlin’s cold attitude and tells Barry he is afraid that she is becoming Killer Frost. Barry thinks that is ridiculous.

When Caitlin continues to be distant and cold, Cisco lets slip that she is acting like Killer Frost that gets him to admit about her doppelganger. Cisco is worried about Caitlin not feeling anything and she replies that she has to be closed off and be all work and not feel. Caitlin admits that after losing Ronnie, Jay was helping her feel again and love again and now that’s gone.

While trying to find King Shark, Barry asks Diggle about Felicity and will call her after they catch King Shark. Unfortunately, more ARGUS men die in King Shark’s pursuit of the Flash. Another victim of King Shark is the West’s home where he rips open to room as he smelled the Flash there. This is what interrupted Barry and Wally’s bonding time. The Flash confronts King Shark and he tells him that all fo the Earth-2 portals are closed and he can’t go back home. King Shark smacks the Flash a bit and escapes.

As Iris and Joe are cleaning up the mess, Barry tells them about their Earth-2 doppelgangers and how Earth-2 Joe died. Barry blames himself for that death and for letting Earth-2 live in fear of Zoom.

Back at STAR Labs, a plan is formed to lure King Shark to them, which works and the Flash and King Shark take their battle to the water. The Flash runs circles around King Shark electrifying the water and knocks him out. 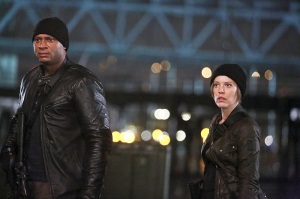 The Diggles thank the Flash for the assist and off they go back to Star City. The Diggles are still shocked to see how fast Barry really is.

Back at STAR Labs, Caitlin pranks Cisco into thinking she is Killer Frost. Cisco doesn’t appreciate the joke but Caitlin assures him that she isn’t a metahuman so can’t become Killer Frost.

At the Cortex, Barry apologies to Team Flash and vows to stop Zoom. Barry doesn’t know how but unveils a case with Jay’s helmet in it and promises to stop Zoom for Jay.

Back in Earth-2, Zoom has taken Jay’s dead body to his lair where the man in the iron mask sees this and is quite upset upon seeing his body. Zoom takes off his mask to reveal that it is Jay Garrick!!! Or at least one of his doppelgangers. Zoom says that Jay being dead complicates things.

Now we have to wait until March 22 to see what will happen.