If you aren’t familiar with Italia Ricci, you may know her as the star of Chasing Life. Also in real-life she is engaged to Robbie Amell, who played Firestorm in The Flash. And of course, Robbie is the cousin of Stephen Amell, who is Oliver Queen/Green Arrow in Arrow. Now Ricci has joined them in playing the villain the Silver Banshee, a character we last saw on TV in one of my favourite Smallville episodes, season 9’s “Escape”. 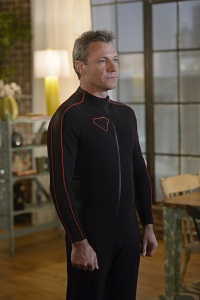 Kara and Alex are having their sister time. When Kara tells Alex that before Astra was killed, she felt that she could have brought her back to the light, if only she had more time. Alex is about to tell Kara that she was the one to kill Astra but doesn’t get the chance when Non arrives asking Kara to come to Astra’s funeral.

In the sky, Kara performs a Kryptonian funeral rites. After Astra’s body is sent to the heavens, Non tells Kara that he will honour the two weeks of morning but afterwards, he vows the next person to be in a coffin will be her.

Back at the DEO, Kara tells Hank and Alex about Non threats. Hank wonders if Non will really honour it but Kara gives him a cold answer. After Kara leaves, Alex really wants to tell Hank but he tells her not to as it is easier for Kara to hate him than Alex.

Lord demands an audience with Kara and was hoping to gain his freedom after freeing her from the Black Mercy. Kara refuses to let him out for hear of him exposing who she really is. Before leaving, Kara recommends that Lord add Call the Midwife to his Netflix queue.

Back at CatCo, Cat gets wind that Lord hasn’t been seen in a while after one of his tech devices has a flaw in it and he hasn’t said a word about it. Cat wants the exclusive as to where he could be. Cat thinks Lord is either off having an affair with a Hollywood starlet (specifically Jennifer Lawrence), off inventing the next big thing or he is missing. Cat wants Lucy to use her Pentagon connections to find out where Lord could be and tasks James to use his investigative journalism skills to find out where Lord could be.

James pulls Kara aside in his office and the two have a bit of a heated discussion over what to do since he knows exactly where Lord is. Kara, meanwhile doesn’t want James to say anything and likes where Lord is now.

Later, Lucy finds out that Lord was taken by a secret government organization and is ready to tell Cat about this. James slips and calls the organization the DEO, which Lucy never revealed the name. Lucy figures that James learned about the DEO from Supergirl and questions how close they really are. When James stays silent, Lucy gets her answer and leaves.

James is out on the balcony all contemplative. Cat shares a story about journalism ethics that prompts him to go the DEO and try convince Kara to let Lord go. Kara doesn’t want to let Lord go as she feels she is a dangerous person James tells Kara the DEO have essentially kidnapped Lord and this goes against everything Supergirl stands for. Kara justifies her decision in keeping Lord but James says that isn’t true to her values.

This gets to Kara as we see at episode’s end, Kara, Alex and DEO, let Lord go. Alex threatens Lord that she will reveal all his criminal activity if he reveals who Kara really is.

Later on, James tells Kara how he didn’t like lying to Lucy and if he wants their relationship to work, he wants to tell her about how Supergirl really is. Kara doesn’t say anything pretty much indicating to James that he can’t tell Lucy the truth. 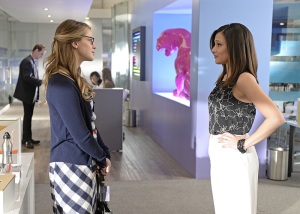 As mentioned, Ricci is the Silver Banshee but we don’t meet her as that character just yet but as Siobhan Smythe, an ambitious young woman that Cat hired to be her second assistant or more correctly her primary assistant while Kara has been relegated to just taking and making phone calls.

When Siobhan spies the heated conversation between James and Kara, she IMs Kara about the nature of their relationship. Kara says that James and her are just friends.

Siobhan really likes to cause trouble because she over hears James and Lucy’s conversation about Lord and the DEO that led to James to get Kara to see some sense regarding Lord.

Later on, Kara tells Siobhan how she doesn’t like her. Siobhan replies back that she is working for Cat so she can become the next her and tells Kara that one day she will her assistant.

I really am looking forward to seeing how Siobhan becomes the Silver Banshee.

The DEO are on the hunt for a Fort Rozz escapee 2444. Unfortunately, someone else snatched and grabbed him. We see that prisoner 2444 get decapitated by the Master Jailer.

Posing as FBI agents, Alex and Hank go and see police detectives Wallace and Draper. Wallace isn’t that helpful but Draper offers up a file of 5 other missing people and when their bodies were found, their heads were missing.

Alex figures out that the Master Jailer is targeting Fort Rozz prisoners and is going in numerical order and his next target is prisoner 2445, an alien living life as an astronomy professor.

When Kara returns pieces of the chains that binded her back to the DEO, Alex and Hank found human DNA on it that belonged to Detective Wallace. When Supergirl and Alex confront Wallace, he tells the ladies that he is one of the good guys. Draper agrees and shots Wallace and Alex, revealing himself to be the Master Jailer and takes Supergirl prisoner.

Back at the DEO, Alex and Hank figure out that Draper is one of the guards on Fort Rozz and is hunting down all the prisoners.

In Draper’s prison, Kara and the professor aka prisoner 2445 talk. Kara is happy to learn that the professor doesn’t hate her or her mother for sending him to Fort Rozz on drug charges. Kara tries to use her powers to escape but it is filled with a red light to emulate the red sun of Krypton. The Jailer arrives and admires Kara and her mother and thinks they can work together to bring in the Fort Rozz prisoners.

The Jailer is ready to execute the professor as the DEO are approaching a cabin in Draper’s name. The cabin is empty but Alex finds the Jailer’s space ship underneath.

The DEO rappel in and stop the execution. The Jailer and Alex fight and she manages to shoot up the ceiling to let the yellow sun in so Kara can use her powers to escape and capture the Jailer.

After their ordeal, Kara lets the professor go so he can continue to teach about the stars.

And when Kara returns to the DEO, she tells the AI Alura about the professor and the starts to ask her about Myriad. But the AI starts to shut down saying she is supposed to self-destruct if questions continued to be asked about Myriad. Hank wonders what is so bad about Myriad that even a AI is afraid of it. Kara continues to give Hank the cold shoulder and tells him that she doesn’t think she can work along side of him after what he did to Astra.

Next week we get another Supergirl alum on the show and it is Smallville’s Laura Vandervort playing Indigo, who looks a lot like The X-Men’s Mystique. Either way, I can’t wait to see her!