Peter Mooney premieres as Dr. Jeremy Bishop, a general surgeon who had to flee Los Angeles after getting sued. Bishop and Charlie know each other while Bishop and Cassie have an awkward first encounter in the on call room.

And Bishop also dives right into the big surgery of the night.

A trapeze artist, Illyana, arrives at Hope Zion, DOA. Her fellow trapeze artist husband, Kurt, agrees to have his wife’s kidney be part of a domino kidney surgery. Charlie explains to Kurt that Illyana’s kidney is going to help save 4 lives.

This surgery is all hands on deck that includes Cassie, Dev and Asha. The kidney patients include a couple, best friends and siblings. The final patient in the domino is a young boy, who is at another hospital awaiting the kidney.

Most of the domino surgery goes off without a hitch. There are some complications like initially one of Illyana’s kidneys might not be viable but thanks to Alex, all is well. The other complication is when Larry, the younger brother of Emma, gets scared and decides not to be a donor.

However, Larry does have some complications as he suffered from a stroke but thanks to Shahir, he will make a full recovery.

We then see all the kidney patients recovering with the couple in the midst of planning their wedding, one of the best friends getting visited by her twin girls and Emma being there when Larry wakes up.

The final patient, the young boy, it seems was successful too as Alex draws a heart over his picture on the whiteboard. 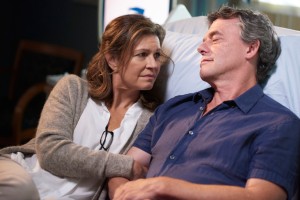 Alex gives Dana a chemo survival kit to keep her occupied during her first chemo session. Dana is joined by Josh, a poetry professor and also a Debby Downer/Chatty Cathy patient. Dana is a bit annoyed at Josh but then the two start to bond when he shares some of his pot cookies. The tables are then turned when Dana becomes a Debby Downer when the nurse becomes uncomfortable telling her her prognosis.

Later, Josh suggests that they both tell each other something they never told anyone. Dana says that she doesn’t want to go through treatment anymore and wants to just go away somewhere to escape all of this. When it is Josh’s turn, he says that he wants to join Dana on her trip.

After her session is over, Dana tells Alex about meeting a guy and how she decided to travel to Paris with him. Alex thinks Dana is crazy for not wanting to treatment to prolong her life. Dana tells Alex that she doesn’t want to prolong her life but to live it. Dana visits Josh to read him a poem that she wrote. The two kissed and then Dana wants to hear more about the star-crossed lover story he started telling during chemo.

Illyana is the spirit of the week. Illyana is wandering the halls of Hope-Zion humming a tune. Christine can see Illyana too and says that she is humming a lullaby that is about reuniting with someone. Charlie and Christine fear for Kurt as Illyana seems hell bent on being reunited with her husband.

When Kurt is besides Illyana body, he tells Charlie how the two met. Illyana is then taken off life sport and dies. We hear the lullaby from both Kurt and Illyana.

And it seems that Illyana gets her wish as Kurt starts to crash an despite Charlie’s best efforts, he and Christine see the couple reunite and go the afterlife.

Later Christine tells Charlie that she was involved in a car accident where a drunk driver hit them and her daughter was killed. Christine wanted to die and join her and when she woke up in the hospital, she could see spirits. Christine and Charlie agree to help each other with their gifts.

While I think it is great that Charlie has someone he can talk to about the spirit world, I hope this is more of a beautiful friendship rather than someone who will come between Alex and Charlie. I don’t think I can take another obstacle to their love.