In the wake of the downfall of Chaos Kass at the last tribal council, Jeremy and Savage take a moment to reflect on their positions in the game. Savage wants to stick to his old school strategy of using the members of his alliance to decimate his enemies in the game one by one. The two alpha males discuss Ciera in terms of being a threat to their games. Ciera has been causing a lot of friction in the tribe by trying to get the members of Savage’s alliance to turn on each other. Savage knows that Ciera is planning to make a big move and target one of the stronger members of the alliance.

Ciera walks the beach with Stephen Fishbach and the two discuss their positions in the game. Ciera tells us that she will just keep throwing different strategic moves at her tribemates to try to convince someone to align with her. She knows that she needs to convince Fishbach that now is the time to make a move against Joe. This is music to Fishbach’s ears because he has already expressed the desire to blindside Joe numerous times. The two of them only need 6 votes in all to flip the game in their favor.

The reward challenge splits the merged tribe (Orkun) in half. The 6 winners of this paddling challenge will earn a trip to the Survivor Café where they will be able to consume all the caffeine and sweets they can eat. The team of Joe, Ciera, Kimmi, Wiglesworth, Wentworth and Keith takes an early lead. Fishbach, Spencer, Abi, Jeremy, Tasha, and Savage make up a lot of ground but still come up short. Fishbach worries that the reward will give some of the women an opportunity to strategize with Joe and throw a wrench in his plan to get him out of the game.
At the reward, the 6 winners of the challenge stuff their faces and relax in the shade of the Survivor Café. Ciera uses this time of rest and relaxation to casually discuss strategy. She pitches the idea that Jeremy, Tasha, Fishbach and Savage are a tight alliance of four that will never turn on each other. Joe recognizes that Ciera is probably right. He needs to devise a plan to make a move at the right moment. After a few moments of strategy talk, Keith hijacks one of the motorized “Tuk-Tuks” and drives the 5 other castaways around the beach as they enjoy the rest of their reward.

It is day 20 and Fishbach is down in the dumps. He is very sad about losing the reward challenge and missing out on the chance to bond with the people who are coincidentally bonding with his nemesis, Joe. He tells Jeremy, he doesn’t want to waste his time trying to eliminate Abi and Ciera. Once again he throws Joe under the bus. Fishbach tries to sell his idea to blindside Joe to Tasha, Jeremy, and Spencer but Savage overhears him. Savage realizes that he needs to target Fishbach to save Joe and to keep his alliance strong. He tells Joe that Stephen is gunning for him. Joe isn’t surprised and he knows that he needs to win the next individual immunity challenge to secure his safety.

The Immunity Challenge is another balancing contest. The castaways have to balance balls on a disk attached to a rope. The last person who has not dropped their balls will win immunity. Jeremy shakes his head disappointingly. He remembers that the last time he competed in this challenge he was the first one eliminated. On the other hand, Keith was the winner of the challenge during that season so he looks excited to give it another shot. The challenge moves fairly quickly until only Joe and Keith are left standing. Keith puts up a good fight but for the second time in a row, Joe wins individual immunity. Now that Joe is safe his main objective is to target Fishbach for trying to get him out.

Fishbach is so frustrated. No matter how hard he tries he cannot seem to get the better of Joe. Joe secretly mounts a counter attack against Fishbach by approaching Wentworth, Ciera, and Abi with a plan. The three women are excited to turn on Fishbach because that would keep them safe in the game for another week. Wentworth and Ciera are really okay with anyone going home as long as it isn’t the two of them. Savage tells Jeremy about the plan but he isn’t very receptive to that idea. Jeremy knows that Fishbach is his loyal ally and he wants to work with him to make moves later in the game. Jeremy convinces the alliance that voting out Wentworth, Ciera, or Abi would be the easiest moves for everyone. Joe is very nervous about leaving Fishbach in the game, knowing that he would like nothing more than to vote him out. Joe tells Ciera and Wentworth that he wasn’t able to get the majority of his alliance to turn on Fishbach so he doesn’t want to go through with the plan. Ciera, Abi, and Wentworth are pretty much marked for elimination. They would need a miracle to save them.

At the beginning of Tribal Council, the Orkun Tribe is greeted with a middle finger from the first member of the jury, Chaos Kass. Jeff Probst starts his line of questioning with Ciera. He wants to know if she still doesn’t think anyone is playing the game. Ciera says that she’s frustrated that some of her tribemates are complacent with being at the bottom of the alliance. Wentworth interjects that there are four people running the game and that leaves 8 other people who should be able to make a move to usurp them. Ciera outs three of the four members of the core alliance as Jeremy, Savage, and Tasha. The fourth member is either Fishbach or Joe. Savage says that the whole alliance of 9 is equal and makes decisions as a unit. Probst asks if anybody has been looking for hidden immunity idols. Spencer assumes that at this point in the game either all the alliances have been found or people are just holding onto them and waiting for their opportunity to play them. Savage calls out Ciera as being desperate because she is not in the alliance. If she was in a better position in the game she wouldn’t have to make that pitch. Kelley Wentworth even alludes to Joe coming to her about making a move against Fishbach. She doesn’t actually out Joe by name because she might need to work with him in the future. She just wants to make it known that the tight alliance might not actually be so tight after all. It’s time to cast the votes.

Probst gives the castaways one chance to play a hidden immunity idol and, to everyone’s surprise, Kelley Wentworth stands up and plays the idol she found during the first Tribal Immunity Challenge. The entire tribe is shocked. They definitely didn’t have a clue that she even had the idol. Probst reads 9 consecutive votes go to Kelley Wentworth. Because of her immunity idol, none of the votes count and the person with the next most votes will be eliminated. Andrew Savage receives the final 3 votes from Abi, Ciera, and Wentworth. Blindsided, Savage is voted out of the tribe and becomes the second member of the jury. 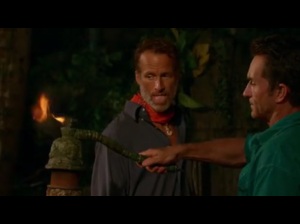 From a strategy standpoint, it’s awesome when a player identifies his or herself as the target and plays their hidden immunity idol. It also makes great TV. But in this situation I am having a hard time understanding why the members of the majority alliance didn’t split the vote to prevent an idol play from knocking out one of their key players. Maybe they were just willing to take the risk of piling the votes on Kelley at Savage’s expense. Maybe we’ll find out in an upcoming episode if there was any strategy behind leaving the alliance vulnerable to a hidden immunity idol or if Kelley Wentworth was just exceptional at convincing her tribemates that she didn’t have one.