When I heard that Matt Ryan’s John Constantine was going to be in an Arrow for at least an episode (I am hoping for an encore after his first appearance), I was excited. I felt that NBC really didn’t give Constantine a chance but then again the network buried the show on Friday nights behind Dracula.

Before I recap Constantine’s appearance, I must first admit that I’ve only seen the first two episodes of the show. I stopped watching not because I didn’t like it but because the show was way to scary for my taste that I had to stop so I wouldn’t get nightmares. Ryan was the one aspect that I enjoyed about the show so it was nice to see him have another chance to still play the character. It’s too bad that Ryan had to wear a wig as he went dark for his role in Therese Ranquin on Broadway.

So how does Arrow integrate John Constantine in their world?

Oliver has returned to base camp where Conklin confronts him about the comms system he found. Oliver lies and says it isn’t his but Conklin doesn’t believe him and brings him to the Baron who is in the middle of beating up one John Constantine! The Baron caught him coming on the island with a map with a location that Oliver knows where to find it. Constantine performs a spell to get him out of his handcuffs and takes out the Baron and Conklin and takes Oliver hostage to bring him to the place he seeks.

Oliver take Constantine to the spot where the latter performs a spell that reveals a hatch. The two go down it and at a threshold that contains ancient writing, Constantine handcuffs Oliver and enters the room. Inside the room, Constantine finds what he is looking for, a scepter stuck in a stone. Oliver gets out of his handcuffs and joins Constantine in the room. Constantine pulls the scepter out like Arthur pulling out Excalibur but once he does, a crate with spikes begins to fall and Oliver pushes him out of the way just in time.

Outside, Constantine explains the scepter is the Orb of Horace and he pull put it where he puts all of his magical objects. Oliver can’t return to camp empty handed so Constantine breaks off the shiny bit of the orb to give to Oliver. Constantine mentions that the rod part is more important because it is a spell book. Constantine performs another spell that transfers the Asian writing on his forearm to Oliver’s abs. Constantine says that will come in handy one day. Constantine’s parting gift to Oliver is a punch in the face as a way to show that he had escaped.

The Truth about Andrew Diggle

Darkh has a mission for Lance and that is to break into a Federal building to plant a USB key in a server farm. Lance brings the USB to Felicity who determines it is some sort of Trojan to erase data. Lance goes to Diggle for help and after clearing the air about why Lance is working for Darkh, the two break in and complete their mission. While at the server farm, the two notice that it is erasing names and one of the names is Andrew Diggle. Lance goes back to Darkh to say he completed his mission and wants to know why he wants information on a dead guy erased. Darkh tells Lance that Andrew Diggle was some sort of crime lord that had to be stopped hence he hired Deadshot to do the deed. Later, Lance gives Diggle a file on Andrew that confirms Darkh’s story. Diggle doesn’t really know what to make of it but has found out what happened to his brother.

The episode begins with Sara killing men who were about to rape a young woman, who looks a lot like Thea. Sara then attempts to strangle the woman but is stopped when the police arrive. As Sara flees she grabs a white sweater.

As Thea and Oliver are training, Felicity hilariously uses the intercom system to summon the siblings. Felicity called them up to alert them of a blonde seen in Penny Town causing a disturbance. This is the same blonde that has been killing people in the area. Green and Red Arrow arrive on the scene along with Black Canary. Sara is there and about to kill another woman that looks like Thea. Black Canary tries to stop Sara and when Green Arrow tries to he is shocked to see a very much alive Sara.

Back at the Arrow Cave, Oliver is none to pleased at what Laurel has done and finally learns the real purpose behind her spa weekend with Thea.

Back at their loft, Felicity and Oliver talk about their desire to see their loved ones again when the two realize that Sara has been targeting people that look like Thea.

Oliver tries to call Thea but she is ignoring his calls. But Thea should have answered because Sara comes after he. The two have a pretty epic fight that Thea manages to escape but ends up in the hospital.

At the hospital, Thea explains to Oliver that Malcolm sated her blood lust, which might explain why Sara is acting the way she is. Laurel comes to check on Thea and Oliver is still pissed.

Oliver and Laurel have a talk about keeping secrets from each other. Laurel then wishes that Oliver would care for her family as she cares for his.

Laurel is at Thea’s bedside where Thea tells her that Sara is after her because she needs to kill the person that killed her.

Later, Sara is in Thea’s room and she welcomes Sara to kill her. Laurel and Oliver, who were trying to repair their friendship, come in and manage to scare Sara away.

At the Arrow Cave, Thea is out of the hospital and offers herself as bait. At the empty Verdant, Thea has managed to lure Sara where Team Arrow tranqs her. Laurel is ready to kill Sara because it isn’t her sister anymore but Oliver says that there is a way to help Sara get her soul back.

Oliver then places a call to John Constantine to come to Star City.

At the Arrow Cave, Constantine tells Oliver that if he knew he was surrounded by beautiful women, he would have visited sooner. Constantine then gives a list of things he needs in order to help Sara and Felicity is just happy that another person from Oliver’s past isn’t some gorgeous woman. 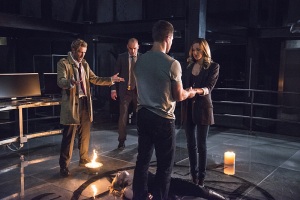 The ritual is all set up and Constantine needs two people to join him in the other realm. The two people are Laurel and Oliver, whom Constantine warns to be prepared for a fight.

Once the three enter the other realm, they are in a version of the League of Assasins HQ in Nanda Parbat. Laurel hears Sara call for helm and she goes rushing off but the three end up where they started. Constantine performs a spell that helps them locate where Sara is. The three find them Sara trapped in the Lazarus pit by Inferi (probably not but that is the best way to describe those creepy hands). In their way are League members that Oliver takes down. Oliver then helps Laurel grab Sara while Constantine fights off another League member. When Sara gets pulled up, she is wearing all white.

Everyone returns back to the Arrow Cave and we see that Sara is back and has a family reunion with Laurel and Lance.

Oliver is forever thankful to Constantine. But Constantine tells Oliver that he owed him one then mentions how the hairs behind his neck has stood on edge since arriving in town. Oliver says that is because of Darkh and Constantine warns his friend about this foe.

Thea has hired political strategist Alex Davis (Parker Young) to help with Oliver’s campaign. Oliver has a big TV interview coming up and knows that the reporter will bring up his playboy past especially his adventure on the Queen’s Gambit (i.e. cheating on Laurel with Sara). After some talk of Quidditch (not really), Alex pretty much tells Oliver to keep his distance from Laurel as it will only hurt his campaign.

Thea is not happy that Oliver is thinking about cutting all ties with Laurel and says it doesn’t speak to his campaign motto of “United”.

After everything that has happened with Sara, Oliver agrees with Thea and invites Laurel to be with him as he gives the interview.

Felicity gets Curtis to help clean up Ray’s message for her and after several energy drinks  later he does so. Curtis on energy drinks is one of the funniest things ever. The only thing you need to know is that Ray is alive.

And can’t wait for next because we get Brandon Routh back and looks like he is tiny and kidnapped by Damian Darkh.