The theme of this episode of The Flash is all about second chances as narrated by Barry in the closing moments. So what are the second chances well it involves family, love and heroism.

How I Don’t Want to Meet My Mother

Iris is looking at some old baby pictures of her and her mom when Joe tells her that she doesn’t have to meet her mom. Iris says that she wants to and she and Joe meet Francine at Jitters. Iris appreciates that Francine got her life together and is all apologetic but basically tells her mom that she got on fine without her for 20 years and wants to keep it that way.

Later Francine visits Joe at the precinct that she is dying of McGregor’s and only has a few months to live. Joe tells Iris this and she thinks that her mom is lying to get her to see her. Joe says that Francine is telling the truth and he won’t be mad if Iris wants to have a relationship with her mom.

Back at Jitters, Iris does see her mom and knows that she is telling the truth but still wants nothing to do with her. The reason why? Iris has found out that Francine bore a son 8 months after walking out on them. Iris can’t forgive her mom for keeping her dad’s son away from each other. I truly believe this is how they are going to introduce Wally West! 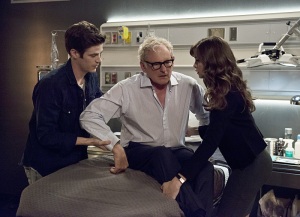 The latter, we saw at the top of the hour was a rising high school football star whose college career was cut short because of the particle accelerator explosion.

Stein and Barry go to visit Jax, now a mechanic, by saying they are from a department out to help people affected by the particle accelerator explosion and leave their number behind.

Meanwhile, Caitlin has brought in Hewitt to STAR Labs and explained all about Firestorm to him. Hewitt seems like a perfect match as he is also a scientist and nerds out over Stein’s research. When Hewitt and Stein try to merge, it doesn’t take and Hewitt doesn’t take too kindly to that news. When he leaves STAR Labs, Hewitt’s hand starts to flame on.

In fact, Hewitt is so pissed that he torches his work place. Back at the Cortex, Cisco finds Hewitt’s police record that involves a history of violence. Caitlin is disappointed that Hewitt wasn’t a match. Barry talks to Caitlin about perhaps not wanting to find a match for Stein as it mean letting Ronnie go. Caitlin takes that to heart and goes to see Jax at his shop. Caitlin tells Jax all about Ronnie and what it meant for him to be a hero and that Jax can have that feeling back too. Hewitt is also at the shop, all pissed at Caitlin for promising something that didn’t come to fruition and is extra pissed that Jax is now the chosen one. 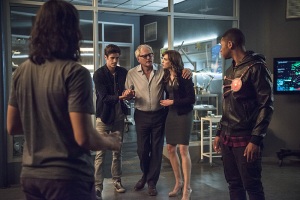 Caitlin and Jax return back to STAR Labs and just in time too as Stein has collapsed and is heating up. Jax gets the Firestorm matrix and he and Stein merge to become Firestorm. Their first order of business is to stop Hewitt who has attacked Jax’s old high school.

The Flash removes all the football players and he and Firestorm take on Hewitt who gets the code name Tokamak. The Flash and Firestorm piss Hewitt enough that they defeat him and he is placed in the pipeline.

The next day, Team Flash sees Stein and Jax off as they go off to Pittsburgh for further training. Before leaving, Caitlin gives Jax Ronnie’s compass and Stein encourages Cisco to tell Team Flash about his vibe powers. Firestorm them blasts off till we see them again in DC’s Legends of Tomorrow.

Moving on with Patty 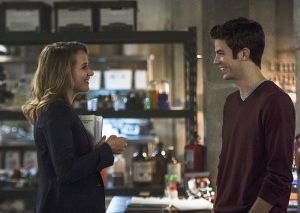 Patty gifts Barry with some teeth that she swears is from a half-man/half-shark meta human. Patty really wants to work on a case with Barry and he agrees to test it. Alas, when Barry does, it simply is human teeth with no shark in it.

Joe is picking up the total flirtatious vibe between his foster son and his new partner and asks Barry about it. Barry says that he and Patty have a lot in common and makes him laugh but alas, she isn’t Iris. Joe says that Iris is Barry’s first love but it’s time to move on and perhaps find something great.

When I heard Barry say that Patty isn’t Iris I was getting some Smallville vibes. For over 8 seasons on Smallville, Clark Kent kept on saying the same thing to any of his potential love interests on how they weren’t Lana. Thank the lord for Lois Lane, who was a breath of fresh air for that show and finally got Clark to see someone who is not Lana can be his true love.

Now, I pretty sure that Iris is Barry’s end game love interest and thankfully she isn’t annoying like Lana was so I am okay if that’s who he ends up with. But, Patty is injecting much needed humor on this show so wouldn’t mind seeing Barry pursue something with her.

And we do see Barry as the Flash spy on Patty at Jitters as he is ready to move on with her. However, before Barry can make his move, he is attacked by King Shark (who was featured in the show’s digital comic). Patty tries to stop King Shark but runs out of bullets but you know who stops him? Harrison Wells.

You see Harrison from Earth-2, leaves STAR Labs to steal a weapon from Mercury Labs. Dr. McGee calls in Joe and Patty and tells the two that Harrison Wells was the thief and he was walking. Patty wants to call in Barry but Joe says no because Wells killed his mom and tells her not to tell Barry.

But Barry does find out because he confronts the mystery man that took down Sharkman to see that it is Harrison Wells.