Who is Harrison Wells? That is a question that Team Flash (of course minus Wells) are attempting to answer throughout this episode while at the same time trying to stop a shape shifting meta-human.

The meta human of the week is Hannibal Bates, whom we met impersonating a bank employee and robs several safety deposit boxes.

Eddie realizes that perhaps they have a meta human on their hands after hearing the real woman profess her innocence.

So Barry and Eddie are working the case and go to enlist STAR Labs for help. Meanwhile, Caitlin is having a bit of a difficult time believing the investigation against Wells but manages to put that aside to help.

Barry manages to track down Hannibal’s last known address, which is his grandmother’s. Unfortunately, Hannibal has morphed into his grandmother and makes his escape after trying to play the host. Eddie gives chase and Barry runs as human speed in case Hannibal’s power includes absorbing his speed. Unfortunately for Eddie, Hannibal morphs into him and critically wounds two cops.

Eddie is in deep trouble with the DA’s office as the proof is in the video pudding. Barry promises Iris that he will get Eddie out as Iris feels guilty over not forgiving Eddie for keeping secrets. As Eddie seems resigned to his fate of going to prison, Barry whisks him away and tells him to run. Eddie says that his situation isn’t like his father’s and that Barry can get him out the right way.

Back at home, Barry is surprised to see that Eddie has gotten out but it isn’t Eddie and soon enough Hannibal knocks Barry out and morphs into him. Caitlin shows up to tell Barry that she has figured out a way to stop Hannibal’s powers. Unfortunately for Hannibal, he has no clue who Caitlin is and has to play along. The ruse continues as Caitlin takes “Barry” to STAR Labs to make the serum that will stop Hannibal, whom she nicknamed Everyman. To distract Caitlin, Hannibal plants a kiss on her that she at first resists but soon gives in until she sees Iris arrive.

Iris reviews the police car dash cam video again and proves that Eddie didn’t do it as the man in the video was left-handed. We then see Hannibal remove a gun and is about to use until Wells Taser’s him out. Wells tells the ladies that “Barry” is their meta human they are looking for. Caitlin and Wells wants to keep Hannibal at STAR Labs but Iris insists on taking him to the police.

On the car ride over, Iris talks about the file that Mason Bridge was compiling on the strange happenings in Central City and this includes the Burning Man aka Firestorm aka Ronnie Raymond. As the two woman talk, Hannibal has turned into a little girl and says she has been kidnapped to nearby construction workers. This allows Hannibal to make his escape.

Caitlin manages to set Barry loose and when they return to STAR Labs. Wells sees that Hannibal’s powers only lets him change into people but not have their memories or abilities. The team gets a hit from Barry’s cellphone at Central City airport. When Barry gets there he finds Hannibal morphing into different people that includes Caitlin, Iris and Eddie, whom the Flash each fights. Eventually into the Flash. So we get Flash versus Flash that the real Flash wins and injects the serum into Hannibal. Soon we see Hannibal morph into the different people that he changed into throughout the episode. When in the pipeline, Wells asks Hannibal who he really is. Hannibal morphs into a man with plain features and says he doesn’t remember who he really is.

With the ordeal over, Iris and Eddie reconcile. Eddie tells Iris that he has been working with the Flash. 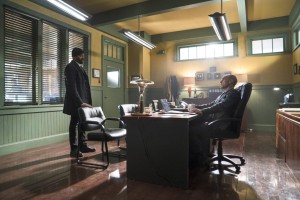 Meanwhile, Joe and Cisco have travel to Starling City to investigate the site of Wells’ car accident that killed his fiancee. Joe goes to Captain Lance for the file on the accident and asks to be driven to the scene.

Before heading out, Laurel Lance asks to speak to Cisco. In the cute part o 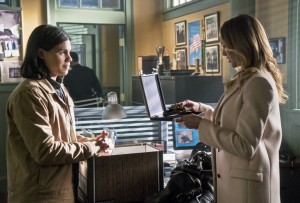 f the episode, Cisco goes all fanboy after learning that Laurel is the Black Canary. Laurel needs Cisco’s help in improving the sonic device that Sara used. We later see Cisco managed to amplify the device and suggests that Laurel call it the Canary Cry. I for one cannot wait to see her use it on Arrow. I also loved how Laurel’s gift to Cisco is a photo of them together in her Black Canary gear.

At the scene of the accident, Cisco uses some sort of device that track tachyon radiation and finds something that indicates time travel. We see Lance’s coffee rise up from its cup. A body is uncovered and Joe manages to convince Lance not to call in the police and let them take the body. 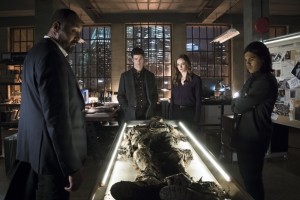 Back at Barry’s lab, Cisco tells Caitlin that the DNA on the body is Harrison Wells, the real Wells. Barry reiterates the story that Dr. McGee said in the last episode how Wells became another person after his fiancee died and the reason is because he is another person.

Later we see Joe meet up with Wells who has come to the precinct to see that Eddie is okay. Makes sense considering that he is his ancestor. Wells seems to know that Joe has gone to Starling City. Joe says it was for a case and notes that Wells used to live in Starling City. The two then talk about going out for drinks again.

In the coda, Cisco is looking through schematics of the particle accelerator and finds a secret room. So using his device, Cisco, Barry and Caitlin find the area of Wells’ secret room. Barry manages to open it and inside they find the Reverse Flash suit and also the paper from the future and Cisco has the best response “what the frak?” what the frak indeed.

I have to say that this show is starting to ramp up and for some particular reason, Grant Gustin was looking really hot.

Looking forward to the inevitable showdown that is coming.