We are heading towards the season 1 finale and we continue on with Gordon making it his mission to catch the Ogre. And with that Barbara finally gets something significant to do on the show.

But let’s break down the action to the several plot points that happened.

We’ve always known that eventually we will see Edward Nygma turn dark. The catalyst to that is Ms. Kringle. When Nygma notices that Ms. Kringle’s cop boyfriend is abusive, he tries to get him to stay away from her but the cop just laughs him and refers to him as Riddle Man. Nygma then stakes himself outside of Ms. Kringle’s apartment awaiting for the drunken cop boyfriend to return. Nygma once again confronts him so the cops starts to beat him up but the future Riddler gets the last laugh as stabs him repeatedly till he his dead. At first Nygma seems shocked at what he has done but starts to laugh manically. 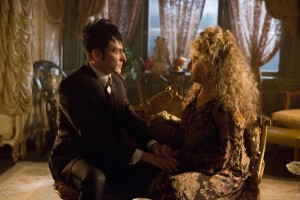 The Penguin makes arrangements from a hit man to take out Maroni at the bar he bought the last episode. However, Maroni shows up at the club and gets chatty with the Penguin’s mom. The crux of this conversation is Maroni spills to Mrs. Cobblepot that her son isn’t just a nightclub owner but a psychopath killer. This news causes Mrs. Cobblepot to faint and sends the Penguin into a fury vowing vengeance. At their own, Mrs. Cobblepot wants to know if Maroni was telling the truth, the Penguin replies that he is just a nightclub owner that she seems to buy. When flowers are delivered for his mom from Maroni, the Penguin gives a threatening message for the delivery guy to give to Maroni but changes his mind and kills the man so he can deliver the message himself.

Bruce and Selina go on a date

Bruce isn’t too happy that Selina killed Reggie but she said that it had to be done and he wanted to do it to. Bruce then enlists Selina’s help in getting close to Bunderslaw at a Wayne Enterprise charity function so they can steal the key to his safe so they can see what he is hiding.

Bruce informs Alfred that he is attending the charity ball with Selina who teases him about going on a date. Bruce then sends Selina a whole bunch of fancy clothes at Barbara’s.

Barbara is impressed to learn that Selina’s date to the charity function, which she too is attending (more on that later), is Bruce Wayne. 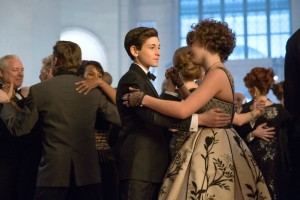 At the ball, Bruce and Selina are dancing on the lookout for Bunderslaw and it seems the people at the ball thinks it cute that the young Wayne is on a date. Later, Bruce admits that he did want to kill Reggie but it isn’t a line that he is willing to cross and doesn’t want Selina to kill again. However, Selina says she would do it again in a heartbeat and would feel no remorse. The two eventually locate Bunderslay and Bruce distracts him so Selina can grab his key to make a impression.

Gordon goes after the Ogre

Gordon fears for Leslie’s safety and finds her safe at her home. Gordon tells Leslie how the Ogre targets the loved ones of the cops that investigate him and he fears the same fate on Leslie. Gordon wants Leslie to leave town but she refuses. Leslie is very flattered that Gordon thinks of her as a loved one and he tells her that he loves her. 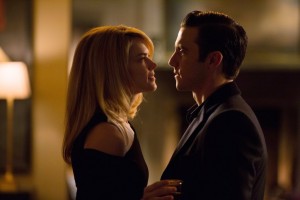 Meanwhile, the Ogre has set his sights on what he thinks is Gordon’s loved one: Barbara. Barbara invites the Ogre back to her place and it really looks like he is going to kill her but changes his mind when she says she has no boyfriend. The Ogre definitely changes his plan when he hears Barbara’s tale of woe about people running away when they know the real her.

Bullock seems to be now onboard with catching the Ogre as he and Gordon question the first detective on the Ogre case and get some new information. Gordon then receives a phone call from the Ogre who threatens him.

With Leslie’s blessing, Gordon holds a press conference telling the Ogre that he is coming after him and isn’t going to stop until he catches him.

Bullock and Gordon follow-up on a lead that the first victim was related to the prominent Van Groot family.

When the two detectives arrive at the opulent mansion, they find the butler trying to kill himself and Bullock finds the rotten body of Mrs. Van Groot. Gordon also finds a series of photos with one member’s face scratched out.

The find out from the butler that it was his son that killed Mrs. Van Groot because she rejected him as a son. You see the Ogre was under the impression that he was the secret son of Van Groot who played along until cruelly pulling the rug from him. When Gordon and Bullock says that the butler’s son is a serial killer that seduces woman, he laughs and says it can’t be his son and shows a picture of a disfigured young man.

Gordon learns that the Ogre aka Jason Van Groot got plastic surgery to look like Jesse from Gilmore Girls.

At the Wayne Enterprise charity ball, Jason meets up with Barbara and he tells her he relates to people rejecting the real him.

When Gordon realizes that the Ogre is targeting Barbara based on something he said during the phone call, he rushes off to her penthouse. Selina answers the door and tells Gordon that she did see Barbara leave the ball with the man in the sketch that Gordon had.

Eventually, Jason takes Barbara back to his place and allows her to go into his room of pain and it seems that Barbara likes what he sees.

Only two episodes remain of Gotham and I have to say that this show really is starting to lose me. We haven’t seen the Major crime detectives in like forever that I wonder if they are still on the show. And the one part of Gotham I’ve never liked is the whole mob stuff so let’s hope that gets concluded in season 1. The one character that I am interested in seeing rise as a villain is definitely the Riddler as they actually made me care about him. So let’s see if this show can end with a bang that will make me want to tune in for a second season.