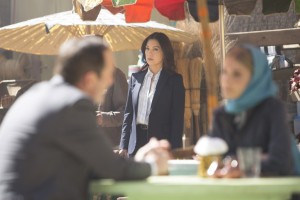 This week’s SHIELD allowed us to see how Agent Melinda May became known as the Calvary and it was badass and also emotional at the same time.

The episode takes place in two time frames, present day and 7 years ago.

The Melinda from 7 years ago is definitely not the Melinda we know today.

7 years ago, Melinda was very much in love and happy with her husband Andrew. The couple are getting busy trying to start a family. The baby making is put on hold as Coulson takes May out for a mission to Bahrain. The mission is to capture a gifted woman by the name of Eva Belyakov who has super strength.

Once in Bahrain, Coulson attempts to speak to Eva but she isn’t in a talking mood and throws a table at him. May notices armed men approaching and other agents try to diffuse the situation but things get out of hand and the armed men take a little girl, whom May noticed before, and runs into a building, along with Eva.

A plan is put in place to rescue the girl and get Eva. If things get dire then SHIELD will send in the Calvary to rescue them. May and Coulson are running point but within one minute 12 agents disappear off the grid. Fury wants them to stand down as there is red tape to get through from the Bahrainian government. May doesn’t want to wait as she wants to rescue the innocent little girl. Coulson holds of the Bahrain army while May goes in.

May takes down each guard she encounters but when she sees one of her men, she notices that he is under someone’s control and repeats wanting to feel her pain. May then notices that all 12 agents are the same way.

In the present day, Agent Weaver and Bobbi ask May about Coulson’s Theta protocol and him working with Deathlock. May doesn’t know anything about it but says she can help bring Coulson in if they let her be in charge of the Base. On their way to the Base, Bobbi tells May that she thinks that Coulson is a good guy but his secrets are doing him in.

Once back at the Base, May recruits Simmons in helping her figure out what Coulson was up to. The two ladies discover that Coulson was never where he said he was at and was secretly meeting with May’s ex-husband. Mack comes in and says that Coulson ordered hundreds of bunk beds for the super-powered army he is trying to assemble.

Meanwhile, Raina is still in her woes is me state. Raina just wants to go outside but Gordon isn’t letting her. Gordon wants to be her guide to help her realize what her gift will be. Lincoln also tries to help comfort Raina. Raina does share with Lincoln a dream she had of Skye having dinner with her father being all happy and that her dad also gave her flowers.

Speaking of Skye, she is training with Jiaying who is really helping her control her powers. During one of these sessions, Skye tells Jiaying about her time in the foster system and how every time she felt at home somewhere, she always had to move on. Skye says one time she was sent packing on her birthday yet the ironic thing is she doesn’t know her real birthday. Skye says that SHIELD was the only place that she felt truly at home and had a family. Listening to all of this forces Jiaying to admit to Skye that she is her mother, something she felt Skye knew deep down. Jiaying says Skye’s birthday is July 2 and tells the story of her birth like she cleaned while in labour and the only car in town was owned by a non-English speaking man.

Jiaying tells Skye that no one can know that they are mother-daughter as others in the complex won’t take too kindly to it. Jiaying explains how one of them, Eva left the complex taking a crystal form of the mist with her. This is where May’s story intersects here.

May confronts Eva and does eventually kill her but she wasn’t the one controlling the men but it was her daughter, Katya, the young girl that was taken hostage. Eva felt that her daughter could move ahead in line of others and puts her through the mist. Katya was using her powers to take down the men and targets May next. May has no choice to kill Katya. This is important because Jiaying is afraid that people will think she did her daughter some favours ahead of them and not take too kindly of it because she is in charge of the complex. Skye promises not to tell anyone of their connection.

After everything is over, the men recover and sees that May took everyone down and don’t know how she did it and nicknames her the Calvary. Aftewards, we see that May is no longer the same woman, she is more distant and Andrew sees her transfer letter to a desk job.

At the complex, Jiaying convinces Skye to have dinner with her father as she owes him that much. If Skye agrees, then she will take Cal far away. At the dinner, Cal gives Skye some daisies and tells the story of her birth. Lincoln comes in and sees the scene and realizes that Raina saw this. Raina’s gift is pre-cognition.

In the coda, two SHIELD agents that have been following Fitz are waiting for him to come out of a fast food restaurant’s bathroom. Inside, Fitz manages to open Fury’s toolbox and communicates with Hunter and Coulson. Coulson asks to meet up but Fitz wants them to help him get rid of the tail. When Hunter hears that there is a hand dryer in the bathroom, he says that Fitz will be alright. And I would like to see how Fitz gets out that situation with a hand dryer.

Next week looks like we see how SHIELD connects to The Avengers: Age of Ultron.