Tonight’s Arrow was part 2 of a trilogy that is all about Laurel slowly becoming the Black Canary and the new Team Arrow coming together. But before we get to that let’s start with Oliver.

Thanks to Tatsu, Oliver is alive and well. While recovering, Oliver dreams about his last encounter with Felicity. In this dream, Oliver decides not to face Ra’s Al Ghul and still professes his love for Felicity and stays with her. But the dream turns into a nightmare when he starts to spit up blood and see the sword that fell him in his gut.

When Oliver wakes up and being tended to by Maseo and Tatsu, it is obvious that things are strained between Tatsu and Maseo but the latter insists on going back to Nanda Parbat and he encourages Oliver to get better and return to Starling City as it is not doing very well.

Oliver worries about Maseo’s safety once Ra’s Al Ghul learns that he betrayed the League of Assassins. But Maseo tells Oliver that his life is there now and when he goes to leave, Tatsu proclaims her love and gives him a kiss, to which he is unresponsive. However, I think Maseo sensed some of his fellow league members outside the cabin.

So while Oliver and Tatsu hide, Maseo tells his colleagues that Oliver’s remains were not found and he followed footprints to the cabin but found it empty. As Maseo makes to leave, a noise alerts the league members who find Tatsu. Thankfully, Tatsu keeps her katana swords in the cabin and thanks to her, Maseo and Oliver, they take down the three assassins. Maseo hides the body and returns to the League of Assassins despite Oliver’ objections.

Oliver, using the GPS signal from the Alpha serum, tracked down China White’s man to a Chinese Triad nightclub in Hong Kong. Oliver and Maseo are made and brought to China White who demands the Alpha serum. Maseo wants to see Tatsu first before handing over his leverage. Tatsu is shown and Maseo gives the Alpha serum. Oliver is shocked at Maseo taking a huge risk and not telling him. Before China White can let Tatsu go, she needs to be sure that the serum is real. Unfortunately, it is not so China White orders the three of them to be killed. It is obvious the three of them escape and return to Maseo and Tatsu’s apartment where the two are reunited with their son.

Oliver confronts Maseo for taking a risk and giving China White a fake but Mase defends himself and says he thought it was real. Maseo believes it was Waller who switched up the serums as she knew he would pull something like this off. Oliver asked was it worth the risk and Maseo says he would do anything for his family. 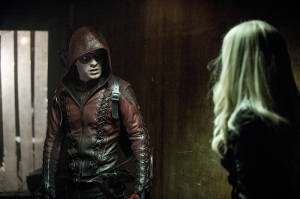 Back at the Arrow Cave, Roy stitches Laurel hope and wants to know what she was thinking in going out there as her sister. Roy tells Laurel that she doesn’t have the training from Oliver or years on the street to be able to do what they do. Diggle even joins in and wonders what Laurel is up to. Laurel is defiant and still determined to go out there and be the Black Canary.

Meanwhile, a still grieving Felicity is strong her stance to not help Ray become the ATOM and the only thing she is concerned about is getting to their meeting with the Mayor (Christina Cox) where Ray plans on making a sizeable donation to the Starling City police.

During the Mayor’s meeting with her aldermen, she states the danger that Brick and his men pose to the city when it so happens Brick attacks the office in attempt to kill the mayor. Luckily, Lance and Laurel are there to take on the men. When one of Brick’s men makes a move towards Felicity, Ray gets all protective and takes the man on. Some of Brick’s men and Brick escape with the aldermen but the mayor is safe and Laurel managed to take down one of Brick’s men.

Later on, Lance talks to Felicity about where the Arrow was. Felicity tells Lance that the Arrow is gone for good.

Before all this commotion happened, Lance asked Laurel if she’s heard from Sara as her Canary alter ego was seen rescuing a young girl. Laurel lies and says she hasn’t heard from her sister.

While interrogating Brick’s man, Laurel uses her position as DA to coerce the man to give up Brick’s location.

At the Arrow Cave, Roy uses Felicity’s facial recognition software to see that Brick and his men are moving the aldermen from their location. This is where Laurel finds out that Felicity has quit Team Arrow. Diggle wants Laurel to stand behind and talk them through things but she insists to be out in the field. Diggle then asks Roy to keep an eye on her.

Back to Ray and Felicity. Felicity is tending to his wounds and asks Ray if fighting off those men brought back memories of when he tried to save Anna. Ray said it did and tells Felicity that he is doing what he is doing not to revenge Anna’s death but to protect the people he cares for and that was the reason why he went after that man because he pointed a gun at Felicity. Ray wants to protect the people he cares about that are still around and he looks right at Felicity. And I hate to say it was I am an Olicity fan but Ray and Felicity have chemistry. And I really would like them to get together before we get the inevitable Olicity.

Later, Brick calls the Mayor to ask for a meeting. The Mayor agrees and they meet at Brockton Point. Also at this meeting are Lance and the Starling City police and Ray, which Brick wonders why. The basic point of this meeting is he wants the police to pull out all police presence in the Glades in 24 hours or he will kill the remaining aldermen.

At the DA’s office, Laurel is feeling guilty that her actions as the Black Canary caused the death of an innocent man. Felicity pays her a visit and Laurel assumes she is there to tell her to stop being the Black Canary. But it is quite the opposite, Felicity is there to give her a pep talk and that while she quit, she realized she was wrong and that they do what they do because they are out to protect those that they care about that are still around. Felicity then gets a call from Lance telling her that the mayor plans on agreeing to Brick’s terms and needs the Arrow but she tells him that while the Arrow is gone, she can find the Canary.

At the Arrow Cave, Felicity is back on Team Arrow and her first order of business is to disguise Laurel’s voice as Sara’s as she calls her dad to say that she is here to help. I love the fact that they gave Caity Lotz a guest credit just for her voice. Part of this conversation is to see if Lance knows anything about the aldermen. Lance points out one of them has a pace maker.

So the new Team Arrow has something to go on. Felicity manages to use the GPS signal on the pacemaker to find their location. Since time is of the essence, Felicity hilariously asks Ray to borrow his helicopter.

With Diggle flying the chopper, he flies Arsenal and the Black Canary to the location. While the work was pretty sloppy, the aldermen are safe but Brick confronts the Black Canary and is more willing to hit a woman. Again this fight is not as clean and Laurel escapes through a window and catches the chopper’s ladder. The whole action sequence of this scene was pretty cool.

Still in Black Canary disguise, Laurel visits her father and uses a voice modulator to sound like Sara. Laurel learns that the mayor still plans on pulling the police out of the Glades because Brick has all the addresses of the city councilmen so she fears for their safety. Lance asks “Sara” to stay and go out for dinner at her favourite Chinese restaurant. “Sara” declines and walks away.

The next day at Palmer Industries, Felicity returns the keys to Ray’s helicopter and also gifts him with a new and improved chip to make his ATOM suit work. Ray wonders why Felicity changed her mind on helping with his suicide mission. Felicity says that with her helping it won’t be a suicide mission.

Thea arrives at Verdant to start her work day and encounter Chase the DJ who was at the club to grab his gear as he feared it getting stolen with Brick’s gang out and about. Chase wonders if Thea is avoiding him because of their kiss and she tells him that there was nothing to it. The two part ways and Malcolm drives up and wonders why Thea hasn’t packed yet as they need to leave town since their lives and threatened. Thea refuses to go anywhere else Malcolm tells her the truth. Roy manages to catch this conversation and later confront’s Malcolm at Thea’s. The two men are very protective of Thea but Malcolm has an upper hand saying he is family while Roy is not.

Later on, Malcolm talks to Thea at her place and tells her the truth that he has a death warrant over his head from one Ra’s Al Ghul and it also includes members of his family. That is why they need to go. But Thea tells her father that he taught her to not be afraid and that they should stay and fight and that Ra’s Al Ghul et al are the ones that should be afraid. Malcolm agrees to stay.

The next day, Chase returns to Verdant claiming to have forgotten something and tells Thea that he thought she was leaving town. Thea dismisses those claims. When Chase goes to get his stuff, he makes a quick phone call in another language (I don’t think it was Chinese) saying that Merlyn isn’t leaving and who is on the other end? Why it is Maseo who has gone back to the League of Assassins. TWIST: Chase is a member of the League of Assassins. Definitely didn’t see that coming, If you did, say so in the comments.

I really do hope we see Laurel really develop as the Black Canary and can equal the skill that Sara had as these fight sequences are painful to watch but maybe that is the point to see Laurel develop. Till next week.