I know exactly when the opening action sequence of The Flash running around Central City catching the Royal Flush gang was filmed. It was October 24, 2014 and the scene took place near Sinclair Centre in downtown Vancouver. Here are some candid shots that I took on that day:

When Barry returns to STAR Labs, he thanks Wells for talking him through capturing the bad guys. Cisco wants to capture the moment in prosperity so people in the future will know about them and the work they did with the Flash.

When Wells returns to his cool, swanky, spacious, modern looking home, we see him rise from his chair and walk around to pour himself a drink while listening to Nessun Dorma from Turandot (it was my mom’s favourite aria when sung by Luciano Pavarotti). All of a sudden the music stops and Wells receive a call from a caller stating that he knows what he did and it is time to pay the Piper. All of a sudden the glass roof of his house shatters and Wells uses his super speed to get out of the way of the falling glass.

The police arrive, which include Joe and Barry, the next day and Wells is back in his chair. Eddie reports that nothing seems to be amiss and Wells tells Joe that the police shouldn’t have been called as it was just a teenage prank that is the cause of all this trouble. Barry uses his super speed to piece together some of the broken glass. Barry tells Joe that no object broke the glass but that it shattered on its own. Both realize that the attack on Wells is no mere teenage prank. Cisco and Caitlin arrive at Wells’ home to make sure he is alright and Cisco is might impress with his boss’ home.

At STAR Labs, Wells admits to knowing who is his attacker. It is Hartley Rathaway (a fantastic Andy Mientus of Smash). If you recall, Cold and Heatwave attacked his family in the last episode and his father said that he was dead to them.

Wells’ explains that Hartley was a STAR Labs employee and is estranged from his family because he came out. Wells also says that he and Hartley had a falling out about a year ago.

Back at Barry’s lab, Barry tells Joe that it was sonic waves that caused the glass to Wells’ place to shatter. Joe believes that there is more to Wells’ story than he is letting on and wants to know more about the mystery man.

Team Flash gets a notification that the Rathaway Industries building is under attack. So the Flash goes to battle Hartley who is wrecking havoc on the building and the police cars that arrive on the scene. At first, Hartley manages to knock down the Flash but soon the scarlet speedster removes the tech gloves that Hartley was using to emit sonic waves. Before the Flash can take Hartley in, he knows that Team Flash is listening and tells the Flash he knows Wells secret.

Hartley is brought in and it is not a warm reunion of the former STAR lab employee. Hartley wants to be called the Pied Piper, a name that Cisco happens to like.

When Hartley is taken to the particle accelerator prison, Cisco wants him to remove metal implants in his ears but Hartley says if he does, he will be in excruciating pain. Hartley then taunts Cisco in Spanish and Caitlin in French. When Hartley talks to Wells alone, he taunts him in Latin. Wells wants to know how Hartley knew they worked with the Flash. Hartley said it was easy as he’s been following the Flash’s movement and it always lead in the direction of STAR Labs. Hartley tells Wells that the Flash is his new golden boy and wonders how he would feel if he knew his secret.

Wells meets up with Barry, Caitlin and Cisco and tells them the secret. Hartley warned him that the particle accelerator could explode but Well chose to ignore the warnings as he felt the benefit of the accelerator was worth the risk. Unfortunately, Cisco and Caitlin doesn’t see it that way while Barry says that Wells needs to do more as Cisco and Caitlin were the only ones that stood by him after everything happened.

It is two years ago and we see Wells and Hartley play a game of chess while speaking Latin. It is also Cisco’s first day at STAR Labs. Hartley is not so welcoming of Cisco but Wells assures him that he is his number 1. It seems that Hartley very popular with the STAR Labs staff especially Caitlin who ignores Hartley’s request of asking Ronnie to do some work. But Caitlin is very welcoming of Cisco.

Later we see Hartley once again warn Wells about the possibility of the particle accelerator exploding and if it does, it will ruin all the work they’ve accomplished. Wells pretty much fires Hartley and gets security to escort him off the premises and threatens Hartley to a life of teaching high school physics if he so much tells people about his warning.

Back to the present day, Cisco is looking over Hartley’s sonic gloves and wonders why it set to such a low frequency if he wanted to take down his family’s building. Caitlin and Cisco both realize that Hartley wanted to be captured and brought into STAR Labs. So alarms are raised and Caitlin uses the intercom to warn Wells, who is in his secret room in front of the Reverse Flash costume.

Hartley pulls his hearing aid out of his ear and uses it as an explosive device to blow his prison door open. Unfortunately, Cisco is caught in the blast and is knocked out. Hartley knocks out Caitlin and grabs his sonic gloves and steals some files.

Wells uses his super speed to try and escape but it fails him and falls to the ground and can’t move, as if he really is a paraplegic. Wells calls Barry to let him know that Hartley has escaped. When Barry arrives, Hartley is gone but Caitlin and Cisco are okay. Cisco only as a concussion.

Wells knows what to do to lure Hartley out again but before we get to that let’s get to Iris.

Tonight, Iris was offered a job at the Central City Picture news as their newest cub reporter. The editor, Larkin (Gracepoint’s Tom Butler), pairs Iris up with two-time Pulitzer winner Mason Bridge (One Life to Live’s Roger Howarth) to shadow. During the first story meeting, Iris suggests doing a story on a Keystone City women’s shelter doing some good work in the community but Larkin isn’t interested in that but more on what she has on the Flash. The hero comes up again when Larkin wants Iris to cover the Flash at the Rathaway Building. Iris realizes that Larkin only wanted her for her connection to the Flash while she wants to be treated like a real journalist. Mason dismisses her as just being a blogger and uses cliche words for women journalist in romantic comedies like gumption.

There is some parallel’s to Iris and Lois Lane as the two lady journalist do have a connection to the show’s superhero. But Iris is no Lois Lane and I haven’t really been able to connect to her character as I would like to.

Hartley does call the folks at STAR Labs and doesn’t quite believe Wells’ Mea Culpa and the only way his vendetta will end is he wants the Flash. 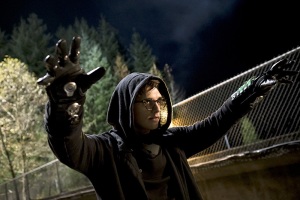 Hartley targets the Central City/Keystone Dam, that Team Flash manages to find because of the seismic activity coming off of his Hartley’s sonic gloves.

The Flash arrives and starts saving the people in cars that Hartley is throwing over the dam.

When the Flash manages to remove the gloves like he did the last time, he believes he has won. Unfortunately, Cisco realizes that Hartley stole files on Barry to learn his molecular frequency. Wells tries to warn Barry of this but when the Flash removed the sonic gloves, it triggered the frequency to go off and the Flash doubles over in pain and we see his body vibrate and Caitlin says that Barry’s vitals are bottoming out.

Wells figures out that he can use the cars’ satellite radio to send out a signal to counteract Hartley’s. It is a success and the Flash is okay and Hartley is down for the count.

Afterwards, Barry goes to Joe and wonders what it was like to raise someone so different from himself, a boy that likes math and science. Barry wants to ensure Joe that no one can ever replace what he has done for him and the two share a sweet moment. When Barry leaves, Eddie comes in and tells Joe that he found nothing in Wells’ house and asks Joe if he wants him to continue to investigate him. Joe gives him a resounding yes.

Back at the STAR Labs particular accelerator prison, Hartley, who is now without his hearing aids, tells Cisco that he will soon get out again and that Cisco will be the one to let him out. Cisco scoffs at that and asks why he would let him out. Hartley replies that he knows where Ronnie Raymond is and he knows how to help him.

In the post credit scene, Wells is working with his AI Gideon on the tachyeon device. Apparently, it is not working as effectively as Wells would like as his speed is not where he wants it to be. Gideon suggests doing something but Wells says not to bother as the end game is near as he looks at the Reverse Flash costume.

What could be this end game? And what will Eddie uncover? Will we find out next week? Probably not but we get to see Barry get some action on the romantic front!