If you don’t want to know the identity as revealed in the post credit scenes then stop now.

Despite thinking it might be Eddie that is the Reverse Flash as during one particular confrontation, the yellow speedster came to Eddie and looked at him instead of killing, the Reverse Flash is …. Harrison Wells. In the post credit scene, Wells put on a gold ring with the Flash emblem on it, touched a wall in his secret room to reveal the Reverse Flash suit. He then used the ring to open up the case and placed the tachyon prototype on it (more on that later). And then Wells modulated his voice to sound like the Reverse Flash.

But before this reveal, it is Christmas time in Central City. Decorations are going up, lights being hung and running around is Barry chasing the Reverse Flash.

We then go back one day and Barry is over that the West household helping Joe decorate the tree. Barry first uses his powers to speed up the process but when Joe complains, Barry undoes the decorations just in time for Iris to come in with Aunt Esther’s famous egg nog that is “light” on the bourbon.

When Joe gets called in on a case, Barry and Iris exchange gifts. Barry gives Iris a replica of her mother’s wedding band, which she had lost in the third grade. Iris gives Barry a brand new microscope.

Eddie comes over to help decorate the tree and is surprised at the very personal gift that Barry gave Iris. Later at Jitters, Edde tells Iris this and asks her if Barry has a crush on her. Iris is oblivous and says that no way that Barry likes her in a romantic way. Satisfied by her answer, Eddie gives Iris her Christmas gift: a key to his apartment. Iris agrees to move in with him.

At STAR Labs, Barry is over to give his Christmas gifts to Team Flash (we never see what they got) and also Aunt Esther’s egg nog. Wells declines but Cisco happily partakes while Caitlin, feeling sorry for Wells, decides to buy him a Christmas gift.

Hello Firestorm: After finishing her Christmas shopping (where she didn’t get Wells a book by Stephen Hawking), Caitlin feels that someone is following her. When she finds the man that has followed her, Caitlin sees that it is her presumed dead fiancee Ronnie Raymond very much aliver and sporting stringy hair and not himself when all of a sudden he bursts into flames. 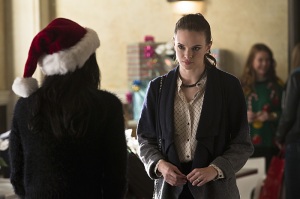 Caitlin then goes to speak to Iris, who first wonders if Barry likes her in a romantic way. I don’t really remember what Caitlin says cause that is not important. What is important is that Caitlin asks Iris for any stories that she has written about this burning man.

The two go back to where Caitlin saw Ronnie. Cisco uses some sort of device that can track some heat signatures, he knows that he is close when it shorts out. Caitlin warns Cisco that Ronnie is not how he remembers him and when Caitlin approaches Ronnie, he keeps claiming that he is not Ronnie. When Caitlin says he just wants to help Ronnie, he once again says he is not Ronnie and says Firestorm and bursts into flames and leaves.

Mercury Labs: This is how we get to see the Reverse Flash come on the scene as he breaks into Mercury Labs wanting tachyon prototype that the facility is developing, calling it the technology of the future. The Reverse Flash kills two security guards but the research doctor is spared as he locked himself in the room with the tachyon prototype. When the police arrive, Eddie says the perpetrator was a flash. When Joe and Barry hear this, the talk to the doctor who said he saw a yellow flash. Barry knows that the man that killed his father is in town and wants to look over his mother’s case. Joe says that he has been in town for weeks as he came by his house and took all the evidence from his mom’s murder and also threatened Iris. Barry is livid that Joe didn’t tell him that the man in yellow is in town.

At STAR Labs, Team Flash convene to figure out how to capture Reverse Flash using an electronic force field. One tactic is to get Dr. Tina McGee (Amanda Pays, who played the same character in the 1990s The Flash) to loan them the tachyon prototype as a lure to capture. It should be noted that Wells calls Mercury Labs a competitor to STAR Labs but since the particle accelerator accident, it has moved to number 1.

Barry and Wells talk to McGee at the police station to get her to loan the tachyon prototype but she declines. Later, with a threat of a court order, McGee finally relents. 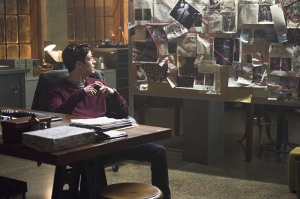 At Barry’s lab, he is looking at the wall about his mother’s case where we flash back to the night of Nora Allen murder. There is a sweet mother-son scene where we then revisit the murder where we see a red and yellow electricity surround Nora.

Barry is awakened from his reverie when Iris comes in and tells him that she is moving in with Eddie. Iris then asks if Barry has feelings for her. Barry says no and that the reason why he has been weird lately is because he hadn’t realize the last year has flown by so fast. Iris seems to have accepted this as an answer.

When Iris leaves, Barry goes to the window and sees the Reverse Flash on a rooftop across from his window. A chase ensues and the two end up fighting in what is BC Place Stadium (home of CFL’s BC Lions and MLS’s Vancouver Whitecaps). During this fight Reverse Flash admits to killing his mother and calls Barry by his name and says they’ve been at this for a long time and leaves.

Back at STAR Labs, Barry is perplexed as to the familiarity that the Reverse Flash used with him and he doesn’t know why. When the plan to capture Reverse Flash is about ready to go, Barry wants to be there but Joe and Wells say it is for the best that he not be there. Barry tries to argue his case but is shot down. Probably one of the reasons, not just his lust for revenge in getting the Reverse Flash but that Eddie wants  him and his task force to be present for this trap as he thinks it is about the Flash.

So Barry goes to visit his father and tells him about finding the man in yellow. Barry says he blamed the man in yellow for his father being in jail but now he blames himself because he almost had him. Henry Allen tells his son that he has to let his mother’s death go. That Barry sacrificed so much for him even not telling Iris that he loves her. Henry tells his son not to let the man in yellow to take anything more away from him. Taking his father’s words to heart, Barry goes to the West residence and tells Iris that he loves her. Iris at first thinks it is friendship love until Barry explains how he had to live with the girl he had a crush on and how he tried to tell her how he felt over the years but couldn’t because if lost his parents and that if Iris didn’t feel the same way too then he would lose her too. Iris has tears in her eyes and is silent throughout Barry’s confession as he understands that she is with Eddie now and it missed his chance.

Back at STAR Labs, the police are there and the trap is set. The Reverse Flash takes the bait. The police including Joe and Eddie and Wells go to speak to Reverse Flash and notes that he has similar powers to the Flash. Apparently, Reverse Flash is happy to meet Wells. Joe then approaches Reverse Flash to ask why he killed Nora. Answers aren’t given when questions are being asked. Cisco notices that the field is becoming unstable and tries to warns Wells and the police.

Reverse Flash manages to get out for a moment and grabs Wells to bring him back inside the force field and starts beating the crap out of him. Joe smashes the force field away to save Wells and this is when Reverse Flash kills the police there, spares Eddie and before anything can happen to Joe, the Flash comes (thanks to an SOS from Caitlin). It is interesting based on now knowing who the Reverse Flash seems to be that Wells beat up on himself. I guess Wells questioning of the Reverse Flash was to throw our scent off of him as being the man in yellow.

I should note that the Reverse Flash throughout this episode was vibrating his face and voice so we won’t know his identity. 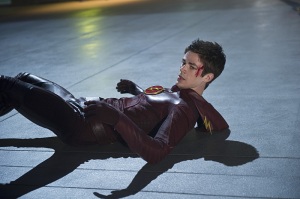 Outside of STAR Labs (which is actually Gate C of BC Place – I walk by it everyday during my lunch-time walks), the Flash and Reverse Flash get into again. Barry takes a pretty bad beat down but is saved when Firestorm comes in and save Barry from Reverse Flash, who takes off in the night. Ronnie/Firestorm then tells Caitlin not to find him again and he makes like the Human Torch and flies off.

Later Caitlin and Cisco are patching Wells up who bring up the fact that Caitlin kept Ronnie being alive a secret. Caitlin apologizes and explains why she didn’t tell Wells but he tells her he is not mad but understands why she did what she did.

At the precinct, Joe lets Eddie in on the secret of the meta humans after Eddie wonders about the man in yellow and why he was spared.

At Barry’s lab, Barry tells Joe about all of his mother’s European travels and he could have study abroad but didn’t because he felt he needed to stay in Central City to solve his mom’s murder. The important part of Joe and Barry’s conversation is that he misses the Barry that gave so much joy into his family when he moved in.

At the Wests’, everyone in the cast is over minus Wells (we know where he is at). Barry congratulates Eddie and Iris on their big move. And it seems things might a bit awkward between the best friends. Cisco then talks to Joe about what he saw during the Flash versus Reverse Flash fight and who red and yellow electricity was seen. Both surmise that the night of Nora Allen’s murder that there were two speedsters. The Reverse Flash was the one that killed Nora but the one in red perhaps was there to save her. That has been a theory that I’ve read that Barry tried to go back in time to save her but inadvertently had a hand in her death.

And we all know what happened during the post credit scene.

So we have well over a month off before The Flash returns on January 20, 2015. And when we get back, it looks like we haven’t seen the last of the Reverse Flash. Until then, is Wells really the Reverse Flash or is that a red herring?