Michael Shanks as Dr. Charlie Harris with the patient of the week 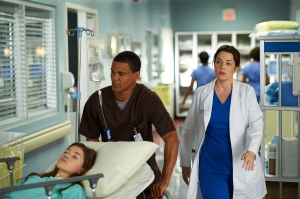 Erica Durance as Dr. Alex Reid with the patient of the week

Joel has returned from New Zealand and his first stop is Hope-Zion to see Alex, who was supposed to meet him at the airport but forgot. Alex asks if his trip was ok then asks about the wedding. Joel answers the questions and presents Alex with a gift. It is expensive looking earrings that Joel thinks might be too much judging by Alex’s reaction but she says they are lovely. Charlie is off to side and witnesses this who exchange. Joel gets paged away and wonders why considering he is not working. So Joel and Alex makes plans for later to make up for not picking him up at the airport.

I think the show is starting to hide Erica Durance’s real life pregnancy as she was seen carrying like a billion binders and charts.

Joel
Joel goes to ER and learns from Zach that Selina asked for him. Selina fell off her bike, scraped arm and bumped her head. She wants to leave to open clinic and is rushing Zach to treat her. But Joel says Selina needs a CT and offers to open the clinic for her. Selina agrees.
At the clinic some not happy Selina not there. One patient, a transgender woman named Teddy tried to get methadone off Joel but no dice. Before Teddy leaves, she complains of headaches but still walks away. While Joel’s day at clinic continues, he finds Teddy convulsing in the waiting area.  Teddy is ok but Joel believes that she is in withdrawal so Joel gives her something to help before she gets on a flight for Fredricton for her grandfather’s funeral. As Teddy goes to leave again she starts to feel numbness on her right side and collapses. As Joel examines her Teddy starts to speak with a slur so he calls Shahir who eventually says that Teddy probably has a blled in the brain and needs to be operated immediately or she will die. Before the ambulance arrives, Teddy takes off. Joel thinks she has taken off to catch her flight but her friend says that she missed her grandpa funeral and points Joel to Teddy’s home under the train bridge. Joel finds her there and brings her to Hope Zion where she undergoes her surgery. Selina is grateful to Joel for his help and all he has done for Teddy. Selina gives him a kiss that Joel pulls away from and is about to tell her that he isn’t single but Selina says it was for Teddy.

Alex and Charlie
Alex and Charlie work on a young girl, Tatum who was brought in by her brother Milo after she jumped off the roof of their parents garage and missed the swimming pool. Tatum’s legs, ankles and feet are in bad shape but Jackson assures Milo that her sister is in good hands and calls Drs. Reid and Harris the dream team. When it comes to the surgery, it is Rian that is in the OR and not Alex. Charlie jokingly is worried about his safety with Rian being in the OR. 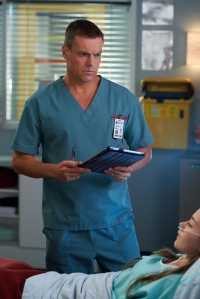 The surgery seem to go well but Tatum’s spirit appears. When they are alone, Charlie asks some medical questions but the teen gets distracted when her crush, Grady, arrives to sit with brother. When Tatum doesn’t seem to be waking up, more truths come out. We learn from Grady that he gave Tatum alcohol to get her to stop following him and encouraged her to jump off the garage roof like the other girls. but she ended up hitting the diving board. Milo tells Grady if Tatum dies he will never forgive him. Tatum realizes that Grady is gay and has the hots for her brother.

Learning that Tatum hit the diving board, he consults with Alex and finds out that her pancreas is bleeding. So back into surgery Tatum goes. In surgery, Rian and Lana see that Tatum’s abdomen is so swollen that it is not advisable to close her up. But Alex believes that Tatum needs to be closed up. The debate goes back and forth until Charlie backs her up and Alex closes up Tatum.

Tatum is going be okay and Charlie tells a lovelorn Tatum that she will find love again. Spirit Tatum then decides to get Charlie to orchestrate a reunion between Grady and Milo by leaving a note in Grady’s hoodie where “Milo” proclaims his love for Grady. When Tatum wakes up and she sees Milo and Grady two kissing and calls them a cute couple. 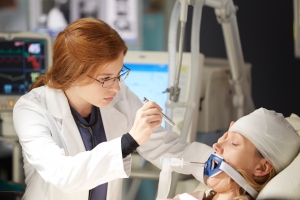 As Katz and Maggie go see their patients, the Zarbs, she quizzes Maggie on some OB questions that could be on her board exams. Maggie only gives a two word answer then makes a joke.

Remember the Zarbs, David and Lara? They were in the second episode of season 3 “Kiss Me Goodbye”  In that episode, Lara fell into a coma and was kept alive to safely deliver the baby she was carrying, At first David wanted to pull the plug on Lara effectively killing their child, but David had a change of heart. It seems that David and Maggie have developed and friendship as the two talk about the pros and cons of milk banks and wall colours for the baby’s room. However, Katz notices that Lara has some brain hemorrhage and baby needs to be delivered now. Maggie comforts David and asks if he has any names picked out. David says it is between Dylan and Ezra. David then tells Maggie that he wasn’t ready for this and doesn’t know if he can say goodbye. Maggie tells David that he can take his time to say goodbye to Lara. Maggie goes to Dr. Day for advice about how to be there for David but he thinks she came to him for something else and tells her that she needs to apologize. Maggie is confused so Day tells her to check her email. Apparently, Katz sent an email to all the staff surgeons saying that Maggie isn’t ready to take the boards because the was flippant in answering her question. Maggie is offended but Katz believes it is true and banishes Maggie from the delivery room and tells her to keep David company.

Maggie goes to see David and go over the pregnancy bag that included a blanket that Lara was brought home and her mother before he. Lara wanted to do the same for her baby. David then refers to the baby as Ezra and tells Maggie about a boyhood stuffed toy of his. Maggie decides that David should see his son being born. At operating room window, David asks tons of questions as he can’t really see what is going on. So Maggie then decides he should be in the room. Katz lets them and little Ezra is born. David cuts the cord and worries that Ezra isn’t crying but a moment later cries are heard. But more complications ensues for Lara as she starts to crash. Katz tells David to say goodbye to Lara but he isn’t ready. After, David is with Lara and tells Maggie that he had hoped that she would wake up and hoped for a miracle but Maggie calls Ezra, who was brought into the room, that he is their miracle. Katz is present for this conversation and later tells Maggie that she was hasty in writing that email and then plants a kiss on Maggie.

Episode’s End
In the doctor’s lounge, Charlie tells Alex that he knows about her and Joel. Alex tells him that she wanted to tell him but didn’t know how as they were starting to get better between them. Alex tells Charlie she doesn’t want to break his heart but he tells her that she is his whole heart and world and that she is it for him. Charlie is flummoxed on how he is not that to her anymore and how easily she can move on to Joel. Alex asks what she can do, Charlie asks her to buy out his half of the condo as he can’t stand the thought of Joel being in the home that they shared. Alex agrees and goes to shake on it and Alex has a flash of a heart being drawn on a beach and Charlie’s face also in her flash. After Charlie leaves, Alex looks confused