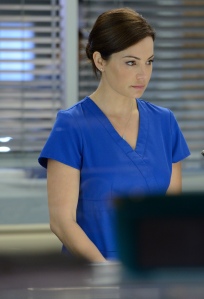 Alex is still in the spirit world and is going over her own chart to see what is wrong with her and the reason why she is still in a coma. Charlie tells her to let her doctors take care of her and that they should get back to their game of strip poker. Alex wins her hand and gets Charlie to take off his top. This is when Shahir walks in to let Charlie know that Alex doesn’t have a brain injury.

In the elevator, Alex has doubts about her recovery but Charlie believes that she will be okay as she believed in his recovery.

As they walk towards a secret destination, Alex and Charlie comes across Maggie, where they briefly talk about Alex’s condition. Charlie tells Alex of break up with Gavin.

Their secret destination is Dawn’s office to see why she won’t see anyone at 8am. If Alex does that then Charlie will recommend that Alex be extubated, which Alex wants. What Alex sees is Dawn singing gently to her guinea pig about how mommy has to go to work. It is a sweet and funny scene at the same time.

At the ER, Zach finds a hung over Joel in a ER bed and wants him to look at a patient but he is not on duty. Joel is also in rough shape and people ask if he has been to see Alex, which he hasn’t yet.

An addict comes in calls himself the Mayor and Zach makes a Rob Ford joke. It seems the Mayor (whose real name is Roy) has an infected tibia from the metal rod in his leg.

Meanwhile, Maggie meets her new boss, Dr. Katz (Stacey Farber), youthful looking and very Jewish. Their first patient pregnant woman who fell while hanging a mobile and experiences headaches. Lara’s husband David arrives and when Maggie takes her for more tests, Lara collapses in the elevator. Alex is there to encourage Maggie as she treats Lara but she then sees Lara’s spirit but who can’t see her.

Shahir states to David that Lara had an aneurysm and she is now in a coma. As Lara hears this news, Alex comforts her.

Back to Joel’s case, he has taken a new doctor under his wings, Dr. Laroche to help with Roy’s surgery. At first it wasn’t going well where there was a possibility of amputating his leg but Joel decides another form of treatment to save Roy’s leg. 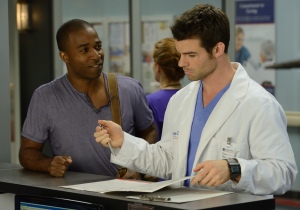 While Roy recovers, Joel outlines his treatment plan and the forbids any visitors as he fears that Roy’s drug dealer will come, which he does. Joel gives chase but is unable to catch him. So Joel decides to stay with Roy to ensure that his drug dealer won’t return and hinder his treatment. However, Roy starts to experience pain under his arm and it not good news and Roy needs more surgery. Before going into surgery, Joel manages to convince Roy to speak to his mom. Roy does but lies about why he is at the hospital.

Back to Maggie and Katz’s patient. Both check on Lara’s baby and we see that David is quite upset at what happened to his wife and punches a door in anger.

Alex wonders to Charlie why Lara can’t see her and wants Charlie to talk to her to offer her some comfort. Charlie gets a call to fix Lara’s husband’s hand.

Charlie treats David, who talks about blaming the baby for what happened to his wife when a code blue for Lara happens. Shahir comes in and tells David that Lara is brain dead as Lara, Alex and Charlie look on.

Maggie and Katz tells David that the baby is still alive and he needs to decide if he wants to keep Lara alive so the baby can be born. David doesnt know what to do. This story is ripped from the headlines from a case in BC. 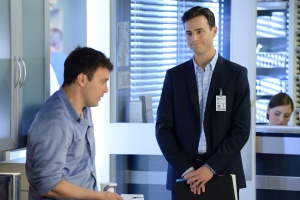 Gavin talks to David about his choice and tells him to take his time making his choice.

At the maternity ward, Charlie asks how Lara is doing, Lara asks if Charlie has kids, which he replies he doesn’t. Lara then asks if Charlie wants kids and he says he does, much to Alex’ delight. Lara believes that her husband will make the right call to save their son. 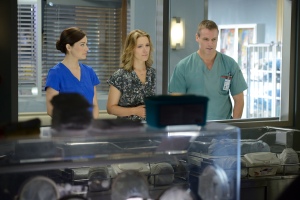 But Lara was wrong. David has decided to take his wife off life support. Katz thinks the decision is BS but Gavin, Malinda and Maggie wants to abide by his decision.

Later, Gavin and Maggie discuss their breakup and Maggie is going to move out of their apartment (we later see Maggie sleeping on the sofa of the doctor’s lounge). Gavin still professes his love to Maggie but this won’t change her mind.

At Alex’s extubation, Alex seems to be doing fine and is breathing on her own but Alex wonders why she isn’t waking up.

Lara wants Charlie’s help in convincing David to change his mind but he doesn’t want to leave Alex but sprit Alex says to go do his ghost doctor thing.

Charlie goes to talk to David about his decision and Lara is coaching him on what to say to convince him to change his mind. But alas, David is not convinced.

When the time does come for them to pull the plug, Lara tells her husband that she will still love him and when she says the same to her son, David takes a moment to say goodbye too but then he changes his mind. David states that Lara would have wanted him to save their son and he wants their son too. Later on David’s mother arrives to comfort her son.

Meanwhile, Roy didn’t make it and this prompts Joel to go visit Alex and tells her that even though he couldn’t save Roy, he refuses to lose her and that she belongs in the here anow now with him.

While this visit is going on, Charlie and Alex discuss what should happen if she should not wake up. Charlie quips that they could solve crimes together. In all seriousness, Charlie has enjoyed their one-on-one time. Alex then states that Charlie would make an amazing father and Charlie states that Alex would make a yummy mommy. Could this be a way to write in Erica Durance’s real-life pregnancy?

Side Note: I try not to talk anymore about Smallville as it relates to Saving Hope but I have to here. When Alex states that Charlie would make an amazing father. Erica Durance pretty much said that line almost exactly how she said it as Lois Lane to Clark Kent in season 10’s “Scion”. It was my favourite line of the episode and it was so sweet.

Anyways, Alex wonders why they waited to have kids and states that when she wakes up, they should have a baby. The two lean in to kiss and Alex disappears. Why does she disappear?

Well, Alex wakes up and how she wakes up is very fairly tale-esque as Joel gives her a kiss. Could that have been true love’s kiss? Who knows but when Alex does wake, she does look at Charlie, who has come running into the room.

So what happens next? From the previews, it looks like Alex won’t remember her trip to the spirit world and it seems that there is something still wrong with Alex according to the spirit of Ian, the man that stabbed her. And I am so glad that Alex isn’t in a coma for the whole season, as predicted.