The following recap and review contains spoilers for season 3, episode 10 of Continuum which won’t air in the US on SyFy until Friday.

A lot of allusions to past episodes makes it appearance in this episode and we also finally get to know who John Doe is and no he isn’t Kiera’s son from a distant future.

We do start tonight’s episode as John Doe wakes up from a nightmare and knocks over some beads. This causes Kiera to wake up and John shares his memories of his daughter. When John looks out at Kiera’s view, he gets confused over seeing all the lights as the time where he comes from, there is only darkness.

Over at Piron and Alec’s lab, whatever he stole from dead Kiera, seems to have made Halo work. When Alec tells the news to Jason, he tells his father that Halo working isn’t supposed to happen until 2025. Despite that Jason wants to be the first person to test the new Halo.

The next time we see Jason, he seems to be all right now. Any mental issues Jason had are gone. Alec’s lawyer then tells Alec to go to a meeting that he can’t put off.

Meanwhile, Carlos goes to his secret freezer and discovers that Alec has taken dead Kiera. Carlos leaves several angry messages to Alec that Alec finally calls back and tells Carlos that he has arranged a sort of memorial service for their fallen friend. More on that later.

Also at the VPD, we see Dillon reflect on the day that he hired Betty for her white hat computing skills. Talk turns to dental plans and when Carlos comes in, Betty is happy to know that the benefits include more than dental as we see a clearly smitten Betty swoon over Carlos.

When Dillon wakes from his memory, he talks to Kiera and reveals how he has embedded his daughter with Liber8 but now knows nothing of her whereabouts. Dillon wants Kiera’s help in finding out where Christine is so that there are no more Betty’s.

Kiera and Carlos start working on a list of future Global Corporate Congress members that have been targeted in the present day by Liber8. Kiera’s points out one company, Gautuma a pharmaceutical company that is small potatoes now but will be a huge deal like curing the common cold deal, in the future. Kiera believes that a company like that holds great interest to Sonya. Before they leave for Gautuma, Carlos makes a crack wondering if Kiera’s houseguest is still sleeping on the couch.

So Kiera and Carlos pay a visit to Gamantau where their spokesperson doesn’t understand why Liber8 would be interested in them. Carlos and Kiera insist on getting a tour of Gautuma. As the two take the tour, we see Dillon’s daughter, undercover as a janitor for Liber8. When Christine sees Carlos and Kiera, she alerts Lucas who then informs Sonya that the Protector is at Gautuma.

Still touring Gautuma, Carlos and Kiera learn that the company is about to go to trial on a drug that will pretty much cure dementia and Alzheimer’s.

Back at the VPD, Carlos informs Kiera that Kellogg has bought a lot of Gautuma stock. Just before Kiera goes to talk to Kellogg, Carlos and Kiera notice that Christine got a cleaning job at Gautuma using a Liber8 member who died in 2056 as a martyr. Carlos is surprised that Dillon is putting his daughter in danger.

When Kiera meets with Kellogg, nothing really comes from it except that the drug that Gautuma is developping sounds an awful lot like the drug Flash that Liber8 released on the streets last year where we saw several of Alec’s friends take.

Kiera returns back to her place talking to Carlos about the possibility of Flash being back in play again. After hanging up with Carlos, Kiera sees John wanting to touch the holo clip that shows his family but Kiera stops him as she doesn’t want the Freelancers breaking down her door. John is frustrated that he can’t remember the wife and daughter that he has. Kiera shares how the thought of her son, Sam, helped her when she first arrived in present day Vancouver. As the two continue to bond, Kiera notes a key hidden in the cuff on John’s pocket. It is safety deposit key from one of the banks that Liber8 robbed earlier this season. When Kiera goes back to the VPD, she watches the security footage of John placing something in the box and Kiera sees it is the device that she gave to the Freelancers. When Kiera confronts the Freelancers to give them back, not surprisingly, Catherine says no. When Catherine and Agent Warren bring up some temporal anomaly that was seen recently (referring to John Doe), Kiera pretty much says mind your beeswax and walks away.

That meeting that Alec had, it seemed to be some secret society of corporate big wigs (probably the beginnings of the Corporate Congress) that warned Alec about Halo.

When Alec tells Kellogg of the meeting, Kellogg advices Alec that he needs someone in charge of the social aspect of Halo. Alec believes that he has the perfect person in mind. 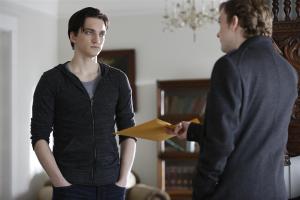 Christine’s undercover work gets a slight detour when Sonja takes her on a road trip to visit Julian who shows them his manifesto. When Alec also pays a visit, Julian leaves Sonya and Christine alone. Julian discovers that Alec wants him to be PIron’s director of social responsibility, given him free reign on using his beliefs, to help Halo be seen as something good. To further tempt Julian, Alec gives him an envelope that offers a taste of what the job can be. When Julian returns to Sonja and Christine, we see that Sonja incredibly moved by the words and says that it is Theseus. Julian replies that the words are his.

But we see Julian take what Alec gave him, which was information that proved that Sonmantos leaked false information to discredit Julian, out to the press. Julian has some demands before fully accepting a job with his step brother.

Back at Gautuma, Carlos questions the spokesperson again but this is really about letting Kiera sneak in using her CMR to steal samples. In fact we see Kiera still about 4. We see Kiera give Carlos on sample, which gets confirmed that it is Flash.

When Carlos and Kiera tell Dillon about this, he doesn’t want to do anything until Liber8 makes their move. After Kiera says that Christine is at Gautuma, this doesn’t change Dillon’s mind.

Kiera then leaks something to Kellogg that causes Gautuma’s stock to drop that causes Kiera to pull Christine out of her undercover work (earlier Sonya threatened to kill Christine if she betrayed them). Dillon isn’t happy that Christine was pulled but Kiera throws back Dillon was the one that didn’t want more Bettys. When Kiera leaves, Christine hopes that Dillon isn’t disappointed in her as she didn’t get much dirt.

We also see Jason working on a drawing and starts to get increasingly agitated. As Jason gets more agitated, in another room, Alec’s research gets interrupted when images appear on a nearby screen. It seems the tech is replaying stuff from dead Kiera’s CMR including her last moments where we see it was actually John Doe that killed Kiera.

So Alec calls Kiera saying he wants to show her something and hopes that she will show at the dead version of her’s pseudo memorial. Although surprised to hear about, Kiera agrees to meet up.

Alec, dressed in the clothes that the dead Kiera knew him in, meets Carlos and Kiera in Escher’s anti-matter chamber. Alec also has the time travel device minus one piece and explains that without the complete the device, the machine will destroy the body letting it becoming a part of all time. Carlos and Alec say their good byes and just before dead Kiera disappears, Kiera notices that her counterpart’s CMR is gone.

After the memorial, Kiera confronts Alec and wonders what has become of the friend she knew two years ago. Alec tells Kiera that he is dead. Kiera becomes disgusted with Alec and wants him to tell her what he had to say to her and then she is done with him. Alec says it was nothing but we see him clutch a USB key.

Later that night, Kiera gives the Alzheimer’s drug to John so he can remember. So after taking Flash, John starts to convulse and we learn who he is. His name is Brad Tompkin (I think) and he is part of the Cowichan Valley militia. Brad states his wife and daughter’s name and how they are dead. His trip to the past is a one way trip and he volunteered to get sent back.

I think there is more to Brad’s story than what he told Kiera. And what is the device that Brad had stored away? Too many more questions that I hope gets answered as head towards the season 3 finale. And what happened to Older Alec. William B. Davis’ name was in the guest starring list but he wasn’t in the episode. The pictures released by Shaw Media showed Old Alec to be in this episode so what gives? Why edit that parts out? Do tell us someone from Continuum. Are those scenes for the next new episode?