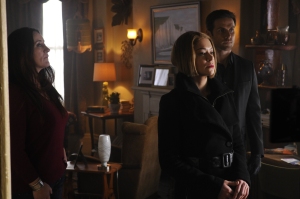 Sorry for this recap being a few days late as I was out of town over the weekend and just got to watching the episode today. As I predicted in my preview image post, this episode was either not going to feature Cosima or Helena (we didn’t get Helena).

A lot went down along with the introduction of a new player in the clone conspiracy. So let’s get started.

Sarah and Mrs. S are at Ethan Duncan’s searching through his house for a particular red biscuit tin. It seems that Duncan is a hoarder and it is a messy and smelly task. Sarah seems to sympathize with Rachel but Mrs. S doesn’t trust someone who was raised by the Dyad Institute. Eventually, Sarah finds the red tin but when Duncan opens it, it seems to be filled with just mementos.

Meawhile, Cal and Kira are still in the camper. As Kira has a restless sleep missing her mother, Cal is using encrypted channels to research the Dyad. Cal then notices that is computer’s camera is on and realizes that he has been compromised. Cal phones Sarah to say as much and informs Sarah of his new location.

Sarah and Mrs. S split up. Sarah to Cal and Kira, Mrs. S taking Duncan away.

When Sarah reunites with Cal and Kira, Cal shows Sarah the picture that Kira drew of the clone sisters of Helena, Cosima and Alison (but Kira calls them her aunts that look like mommy); he wants answers. Sarah can’t divulge anything and balks at the idea of Cal suggestion of running away to Iceland.

Their conversation is interrupted by a call from Felix needing her help with Alison in rehab (see Alison’s section below).

We see Cosima starting to get the procedure that will make her well and leave to Cosima and Delphine to make a medical procedure very sensual. Later Cosima walks in on a screaming match between Delphine and Scott. Cosima is livid after finding out from Scott that the sample used for Cosima’s procedure is from Kira. Delphine defends herself that she didn’t know and that Leekie is the one that planted this sample. Apparently, the Dyad got a hold of Kira’s DNA from the tooth that fell out during her accident last season.

Cosima calls Sarah to tell her this news. Cal and Sarah argue about using Kira as a lab rat but Sarah insists they need to do this to save Cosima. Kira, as cute as ever, pulls out an already loose tooth so that Sarah can give to her Auntie Cosima. Against his better judgment, Cal says goodbye to Kira and Sarah and gets Kira to promise to call him if she ever needs him. All this by the way happens after Sarah deals what she has to with Alison.

Paul updates Leekie on Sarah and Helena. Paul says that Helena is now with the Proletheans and also reports that he didn’t find Duncan, which of course is a lie. Paul tells Leekie that he went straight to her and not Rachel.

Leekie then meets with an old friend, Marian Bolt (Michelle Forbes) and the two talk about the fact that Duncan is alive. The two decide it is not in Rachel’s best interest to let her know her father is alive. Marian then mentions how Leekie and her only meet when it has something to do with Sarah Manning and that needs to change.

Later, Mrs. S visits Leekie to offer a deal. It seems that the tin that Duncan wanted to find not only had mementoes but all of his and his wife’s original research on floppy disk. Mrs. S will exchange Duncan and his research and Leekie will drop their hunt for Kira. Leekie agrees. Just when we think Mrs. S. has betrayed Sarah, it is all a play cooked up by the two to bring Leekie down.

We see Paul bring Rachel to Mrs. S’s where father and daughter reunite. It is a tearful reunion, where the end result is Rachel firing Leekie from Dyad and pretty much telling him that she is sparing his life suggesting to not drive his car nor go home. It seems this was cooked up between Rachel and Marian. More on Leekie in the Alison section. 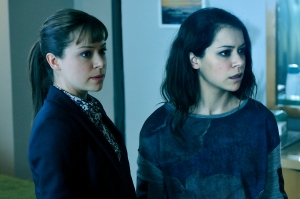 Alison and Vic continue to bond over crafts of making the name tags for family day. Alison gets so comfortable with Vic that she in fact confesses that she let Aynsley die. When Vic thinks he is alone in his room he is talking to Deangelis to say he has some juicy on Alison. At that moment, Alison is outside about to give Vic a gift that she made for him that he left behind and overhears everything.

Alison then calls Felix in the middle of the night to help her with the Vic situation as she doesn’t want to go to jail. The next morning, Alison and Felix confront Vic on his deal with Deangelis. Vic calmly explains that his deal with Deangelis allows his record to be wiped clean and he is scheduled to meet with her later today. As Vic is about to leave, Felix and Alison offer up Sarah to Vic. This leads Felix to call Sarah.

When Sarah arrives to rehab, it is in the midst of family day. Alison’s kids and Donnie are there too with Alison giving Donnie the cold shoulder. Sarah makes her way to Alison’s room and Vic is there. Vic makes amends to Sarah and wants her to apologize to him too. Sarah does it half-heartedly but when Vic proclaims he wants her back, this is where Sarah balks. As Vic continues to talk, he starts to wobble and then falls flat on his face onto Alison’s craft table and is knocked out cold but not before being bedazzled all over the face. Before Sarah and Felix can do anything to hide Vic, the rehab’s centre director, thinking Sarah is Alison, drags her back to Family Day to make a speech and do really bad role play with Donnie. During this role play, we see Sarah as Alison use words like monitor to see if Donnie will budge.

While all that is happening, Felix and Alison are trying to hide Donnie’s body and at the same time, Deangelis arrives for her meeting Vic. After some clever text messaging, they throw Deangelis off the trail and stash Vic’s body behind reception where Deangelis finds him. 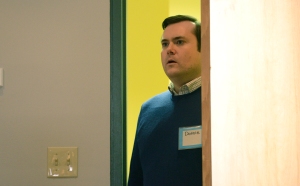 When Alison returns to her room, she reams Sarah out for the stunt she pulled and this is when Donnie enters her room and sees the two of them. Alison starts talking clones and him reporting to Leekie but it is clear that Donnie has no clue what is going on. Felix and Sarah take this moment to slip away.

Donnie claims that he has no clue what Alison is talking about but explains that he became her monitor because he got recruited for a sociology study.

Later that night, Donnie follows an on the run Leekie and points a gun at him to get him in his car so they can speak. Donnie  is very angry at knowing the true origins of his assignment. Leekie is being condescending to Donnie and when Donnie tells Leekie that he quits, he slams the gun on the steering wheel and it goes off killing Leekie.

And that was quite unexpected seeing Leekie’s brain splattered all over Donnie car. So with that, who is the season’s big bad? Is it Marian? or Rachel? Be interesting to learn more about this new player as we near season’s end.