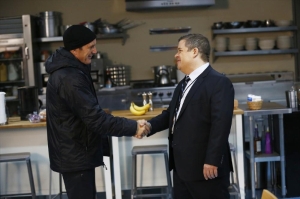 There was a moment in last week’s SHIELD where you might think that Ward is a double double agent because of that look he had in his eyes during the post credit scene. I thought that perhaps Garrett brainwashed him or something but tonight’s episode, we learn the truth of Ward’s true allegiance.

We begin the episode with Raina folding paper flowers in her SHIELD jail cell. Raina hears a commotion outside and Ward emerges. At first Raina is frightened of Ward but then calms down when he presents her a gift from the Clairvoyant: a red floral dress.

At the HUB, Coulson is the man in charge now with Hand out of the office. Coulson is assessing the situation and learn from Skye that there are only three safe SHIELD locations. We later learn that the Fridge has been re-taken by SHIELD.

Meanwhile, FitzSimmons and Tripplett are repairing the landing platform of the Bus. Simmons seems to be losing faith in SHIELD while Fitz remains loyal.

Coulson starts to make plans on what to do next when Air Force Colonel Glen Talbot (Adrian Pasdar) calls in and say that a team is coming to the HUB to investigate the mess that SHIELD is in and see how HYDRA was able to be embedded so long in SHIELD. Coulson agrees to see Talbot but as we all know he makes other plans. Coulson tells Skye if they stay then they either would be in front of a court for 6 months or be thrown in jail

We learn that Ward has taken Raina to Havana where she finally gets to meet the Clairvoyant however she is highly disappointed to learn that Garrett has no powers but just high clearance at SHIELD. But Garrett has need for Raina and uses a barber chair to lower her to his home base.

As our SHIELD agents prepare to leave, Tripplett wants a lift too but Coulson doesn’t trust him because he spent so long in Garrett’s company. But Tripplett defends himself and says he was duped too. Simmons defends Tripplett too stating that he risked his life for her. So Tripplett stays.

Back in Havana, we learn that Ward truly is with Garrett as Garrett reprimands him for allowing himself to fall for Skye when his mission was to find out how Coulson survived. The two then show the real purpose of why they want Raina. They basically want her to replicate the drug that saved Coulson and Skye because Garrett’s attempts have been futile. Ward gives Raina a hard drive that contains Simmons’ research.

Meanwhile, on the Bus, Skye informs Coulson that she has only managed to get the Internet up. Coulson orders her to erase any traces of all the agents on the Bus and this includes Ward. Coulson also asks Skye to call Ward.

As Ward and Garrett prepare to raid the Fridge for its goodies, Skye does call Ward, who lies effortlessly on what is going on with him. Also, Raina asks Ward how he got Coulson’s team to trust them and he tells her but that Skye was an unknown variable. Raina calls Coulson a good man and that must count for something to Ward. Ward said it does but he owes Garrett everything.

Later, Skye comes into Coulson’s office to hand over everyone’s SHIELD badge. Skye tells him that the badge represented acceptance while Coulson shares how Fury recruited him. When Coulson places everyone’s badge in his safe, his badge starts to light up like a Christmas tree and on it was a set of coordinates.

Coulson is convinced that these coordinates are a message from Fury. These coordinates point to a place up north in Canada. Everyone seems skeptical about Coulson’s believe except of Fitz who remains loyal.

When May tries to take Coulson weapon, Coulson demands to know what Fury asked May to do. May says that Fury asked her to keep an eye on him because Fury believed that the operation might have been conducted by HYDRA agents and that he might turn turncoat or go mental any day. Coulson refuses to hand over his gun and storms off.

We switch our action to Ward who “brings in” Garrett as a prisoner to the Fridge. The SHIELD officers there refuse to open the door unless Hand is there. Ward tries to get them to open it when a helicopter appears and opens fire on them. Of course this was all part of Garrett’s plan to get the doors to open. When it does, Ward shoots the two guards dead. Then it is like Christmas morning for Garrett as he enters the room where they keep all the weapons, human and alien. Among them is the device in Peru that was seen earlier this season and that Asgardian staff in the episode after Thor: The Dark World. Garrett uses the device from Peru to blast holes in walls to release prisoners that includes a familiar prison (I don’t remember him but the episode focused on that guy so I am guessing he appeared in a previous episode). Just before Garrett and Ward leaves, Ward takes the weapon to blast a hole on the floor and both are happy at what they find.

When Garrett and Ward return with their haul, Raina tells them that the drive they gave her won’t work unless it is Skye that is the one to open it. Garrett looks to Ward and tells him that he knows what to do.

The Bus arrives at their frozen destination and before Coulson tells them that they only have 8 hours before a satellite flies over that will alert Talbot of their location. He also pretty much tells his team that you are either with him or not. When Coulson starts his trek, everyone follows him.

As they follow Couslon, FitzSimmons debate about what is going on with Coulson while Skye and May think that he might be having a mental breakdown. Coulson leads them to the coordinates but then there is nothing there. Couslon breaks down and insists that they are still SHIELD and in his frustration he tosses his badge up in the air that then gets shot at by an automatic machine gun. Everyone takes refuge but Coulson; he identifies himself and a voice says that they have been expecting him

A rock door opens and they are greeted by Agent Eric Koenig (a hilarious Patton Oswalt) who informs that this is a secret base of Fury. When Koenig takes them to the base’s cafeteria, he informs the team that Fury is indeed dead and that the Fridge was under attack. Skye gets worried and calls Ward and reaches him and relieved to know that he is safe.

In private, we learn that Koenig as been in the base he calls Providence sine the events of The Avengers and tells Coulson that Fury is actually still alive and only a select few know: Koenig, Maria Hill, Captain America and now Coulson. Koenig gets Coulson to promise not to tell his team this piece of news.

We learn that Ward is to go back to this team and pretty much seduce Skye into giving up her password to the drive and all that fails then just kidnap her. To make his return convincing, Garrett beats the crap out of Ward, who arrives at Providence into the warm embrace of Skye.

In the post credit scene, Quinn, who was broken out of prison, confronts Garrett and is pissed at how he ruined his life. But Garrett has an ace up his sleeve and shows the Gravitonium that Quinn had wanted in one of the early episodes of SHIELD. Quinn is happy to see this.

We know in that Gravitonium is the scientist that Ian Hart played so it will be interesting to see how that plays out. And looks like next week we get more Patton Oswalt and maybe a little remorse from Ward? If not, then I think Ward will get killed in the season finale unless they want to make Ward like the Big Bad for the show. Until next week.