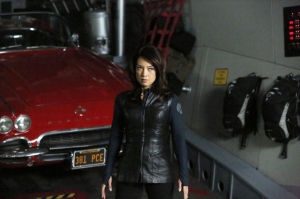 Anyways, we pretty much pick up where we left off but we see what Agent Garrett was doing when things were going to hell. Garrett plane is sicced upon by two drones that he notices are from SHIELD. Garrett does some moves to avoid its fire.

We then switch to the Bus and see the confrontation between, Skye, Coulson, Fitz and May. May still pleads her innocence about not switching the plane’s direction. Coulson wants to know why May had an encrypted line. The only thing May will reveal is that it is to talk to Fury, May turns the tables and asks why did Fitz need one and he confesses to talk to Simmons and eventually tells Coulson it is related to the drug that saved him and Skye.

Eventually, Coulson shoots May with an icer and throws her in the brink with Ward where he tells him that May has betrayed them. Ward feels betrayed by May but May throws in Ward’s face how he killed an innocent because he let emotions get in the way.

Later, Coulson receives a distress call from Garrett and with the help of Fitz takes over the planes weapons system and helps save Garrett from the drones.

Back on the Bus, Garrett wants to know what is happening but Coulson isn’t much help. Skye meanwhile has decrypted an encrypted message that SHIELD HQ was sending it out. The message revealed this five-letter world: HYDRA. This is revealed in Captain America: The Winter Soldier that they’ve have returned. In the movie. HYDRA is comprised of SHIELD agents. Coulson believes that Hand is a HYDRA agent

As the plane starts to touchdown at SHIELD HQ, Coulson gets May to call Fury on her newly repaired encrypted line. When May does so. she learns that [SPOILER ALERT] that Fury is dead. Before they can digest that news, the plane is riddles with bullets and May is shot in the arm. Ward is released from the brink and wants to know what is going, Garrett informs Ward that Hand is party of HYDRA and is the Clairvoyant.

Meanwhile at SHIELD HQ, Simmons is doing tests on Skye’s blood when Tripplett comes in asking what she is doing but Simmons doesn’t really answer but eventually trusts Tripplett enough to tell him as she needs his help so that she can call Agent Weaver at SHIELD Academy for some help. When they reach the communication room and talk to Agent Weaver, we see that the Academy is under attack by HYDRA and tells Simmons to not trust anyone. Tripplett then closes the door behind Simmons and we are lead to believe that he is a HYRDA agent but actually is not. Agent Hand and other agents find Simmons and Tripplett and Hand makes a speech about how it is HYDRA’s time to rise blah blah blah and wants Simmons and Tripplett to pledge their allegiance to HYDRA but it is a test that both passed. Hand isn’t HYDRA but she tells them that Coulson is. Simmons doesn’t believe it but Hand presents some pretty convincing arguments. But we know that this isn’t true.

Just before what they think are HYDRA agents descending the plane, Coulson is patching up May and since Fury is dead, reveals what her mission was. To make sure that Coulson doesn’t show and physical and mental breakdown. May also revealed how she was the one that assembled his team and how it was comprmomised of people who could help him (FitzSimmons) or put him down if he should go off the rails (Ward).

Our team of SHIELD agents have managed to escaped the plane and split up. Coulson, Garrett and Fitz break into an area that allows them to find Simmons while Ward and Skye are off to get to an area needed by Skye.

It then looks like the two are trapped but Ward is willing to confront 12 agents. Skye tells him that he is going on a suicide mission and Ward says it is something he needs to do to atone for killing an innocent man. Skye tells him that he had no choice and not to beat himself up over it. Just before Ward goes off to battle, he asks Skye out for a drink and a talk. Skye agrees to this drink and kisses him before he goes.

When Ward emerges out of hiding, he takes out several guards but is ganged up upon and starts to get beaten. We switch to Skye’s point of view of her listening to the fight and when it looks like someone is coming in to her hiding spot, it is Ward. Ward asks Skye if she is ready to hack the process server room but instead she reveals that she will blow it up.

Back to where Fitz, Coulson, May and Garrett are, May notifies them of Hand’s location. Garrett is very keen to kill Hand while Coulson wants to question her. Garrett starts to list everything that Hand did as the Clairvoyant as reason enough to kill her but Garrett says too much and Coulson gets an a ha moment and realizes that Garrett is the Clairvoyant. I so called it. Garrett tries to talk his way out of that accusation but eventually admits that he is the Clairvoyant. When SHIELD agents come in, Garrett says that Agent Sitwell must have informed some of you on what to do if they are in a situation like this. So we see about four SHIELD agents shoot their fellow agents and Garrett says “Heil HYDRA” and the agents follow suit.

Garrett explains to Coulson about HYDRA biding their time till they can come out and that HYDRA spreads high up within SHIELD and the SHIELD they knew is gone. Garrett tells them that he will kill Coulson and May but offers Fitz a job but Fitz refuses. So Garrett is ready to kill them but shoot Fitz in the kneecap. But the explosion that Skye and Ward sets in motion goes off that allows Coulson and May to fight the HYDRA agents. Fitz does saves May and when it looks like Garrett is going to do Coulson in Fitz gives Coulson some sort of tech that knocks Garrett out.

Hand comes in with other SHIELD agents and believes Coulson when he says he isn’t HYDRA as they heard Garrett’s confession.

Back at the comms room of SHIELD HQ, Hand mentions that Captain America has defeated the three heli carriers but has disappeared off the grid. Hand realizes that she and Coulson are the highest ranking SHIELD agents remaining and it is up to them to try and restore some sort of order. Hand’s first step is to take Garrett to the Fridge and Ward asks to accompany her as he feels betrayed by his SO.

Our SHIELD agents minus Ward are back on the Bus. Coulson gives orders to FitzSimmons and Skye to restore what they can of the plane’s firmware and tells May that while she isn’t a friend but is an ally and they need those if they are to survive.

On the plane to the Fridge, Hand taunts Garrett and offers Ward to actually kill Garrett. It looks like Garrett is as good as dead but instead Ward shoots and kills Hand and her men. With an evil glint in his eyes, Garrett knows that Ward is loyal to him and thus HYDRA. We see this evil glint again in the post credit scene as we see Ward listening to Garrett tell one of his stories.

I can see how people might get frustrated with this twist and it is a doozy that Ward is now a HYDRA agent or maybe has always been. But I am not giving up on this show. I have invested like 6 months on this show and I want to see where it is going.