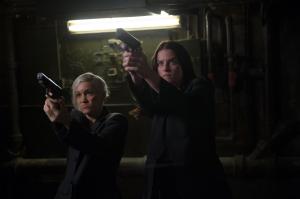 The following recap and review contains spoilers for the season 3 premiere of Continuum which won’t air in the U.S. until April 4. So if you don’t want to know how the show resolved the season 2 cliffhanger then stop right here. If you want to know, then please read on.

Season 2 of Continuum ended with Alec taking the time travel device to either go to the future or to the past to save lady love Emily. We also saw our time travellers like all the Liber8 members and Keira kidnapped by the Freelancers and locked in glass boxes. Are they in the future or somewhere locked away in the present? Also, we see Carlos and Betty visit Julian.

The season 3 premiere answers some of those questions but poses some more.

We pick up the episode with Alec going back in time in his attempt to save Emily but as he starts to disappear into the past, the Freelancers shoot at him, the bullet grazes his temple but it works, Alec is the past: one week earlier to be precise.

As Alec makes his way towards his lab, he takes the time travel device apart and buries it in a park. When Alec arrives to his lab, he sees from a distance Emily and is pleased to see that she is alive. However, Alec realizes he is in big trouble when he sees his past self emerge from the lab. Before he can make a hasty escape, Alec is confronted by Jason asking who he is. When Alec states that he is his father, this shocks Jason but after Alec explains that he is from the future and one of his plans involve stopping Escher from using the time travel device, Jason is on board helping this version of his dad. When they get into Alec’s lab, Alec takes a piece of the time travel piece that is in there and asks Jason to grab the suit so that it can’t be used by Travis. Kellogg arrives and thinks he is talking to his timeline’s Alec but Future Alec talks to Kellogg with all the knowledge that he possesses about what Kellogg is going to do and even calls him on the deal he made with Sonja and Travis. Kellogg is shocked at this Alec’s new attitude.

When Alec and Jason leave, Alec is surprised by Emily who thinks that she is talking to her Alec. Future Alec is surprised to see her but gives her a passionate kiss that prompts Jason to leave them alone. At a cafe, Future Alec agrees with Emily’s plans with past Alec to go to Thailand. Emily is happy that Alec wants to leave with her but is afraid he will change his mind once she tells him the truth about himself. But Future Alec assures Emily that nothing will change his feelings for her. Alec leaves Emily to take of something and that is him going the VPD to tell that timelines Keira and Carlos where Lucas is. This Keira is worried about Alec’s behaviour but Alec manages to explain it away. By the way, Alec explains the wound on his temple as a bump on the head that caused some memory loss that will explain any erratic behaviour between himself and past self.

We then see the take down of Lucas and Keira finding the time travel device.

While all of this is going one, we are interspliced to what happened to Keira after Alec went back in time. We see Keira being drugged and dragged through a dingy corridor like we saw in the season 2 premiere. Keira is placed in a glass cell and sees a captured Garza and Jason. When one of the Freelancers emerge, Keira is shocked to see that one of them is Curtis Chen and she wonders how he can be alive considering she shot him dead.

Later we see Curtis interrogate Keira about Alec and what his plans are by going to the past. When Keira tells what she knows, she is soon brought to Catherine (Rachael Crawford), whom Keira dubs the head Freelancer. Catherine explains to Keira that when she went back in time, this lead to criminals in 2077 to use time travel to change history so a law was created to stop this. Part of this is a man went back 1000 years in time to start an organization (the Freelancers) that is all about restoring the time line. Keira calls them a cult. Catherine explains that with two Alec Sadlers now in the past, this has disrupted the time line and because of that, the Alec Sadler of 2077 and all the innovations that he created will no longer exists. Also that they aren’t from the future. The Freelancers need Keira’s help. When it seems that Keira won’t help, she is taken back to her cell. On her way, Keira sees Garza come up the stairwell. The two ladies give each other a look and all of sudden the two are working together to take down their Freelancer guards.

They take their clothes and make their way through the labyrinth corridors for escape while avoiding drones and Freelancers. Garza tells Keira of some military tactics that they once used in her time at the military. The two ladies try to use it. The ladies hide but Garza decides to act as a distraction but is shot and killed. However, Keira escapes and manages to make it to a hole in the building they are held captive. I am not quite sure if they are in a dam but I think so because there is waterfalls around her. Before Keira can escape, Curtis does capture her but around them we see a storm brewing and destructions and chaos abound in downtown Vancouver.

When Keira is brought back to Catherine, she tells Keira that their timeline is about to be destroyed because they are two Alec Sadlers. They need Keira to go back and fix things. To go back, Keira needs to sit in some sort of dentist chair that gets surrounded by some cylindrical cage. Before, leaving, Catherine gives Keira’s CPS suit some sort of upgrade and warns her to not to encounter her other self.

Back to the present, we see the conversation that Kellogg and Escher had in the season 2 finale in that art gallery. The conversation is a bit different but there is still talk of time travel and anti-matter. The main difference is after Kellogg leaves, someone shoots and kills Escher with a silenced gun. We later see that the shooter was Emily.

As Keira arrives in the present, she lets Garza go and gets the fiesty LIber8 member to trust her by recounting the same military story. So Garza escapes. When Keira meets up with Catherine, she proves that she was sent her from another timeline by showing that she is now a Freelancer. One thing that Keira gets Catherine to promise is not to pin Agent Gardiner’s murder on her.

Later, we see Alec back at his lab getting his passport and some money in anticipation of his trip. However, Alec is stopped when he notices Keira on the floor dead with bullet holes riddled in her body and head. Alec grieves for the loss of his friend and blames his time travel on why this has happened. But Alec doesn’t have too long to mourn and another Keira (the one that came back in time) emerge behind him and the two just stare silently at each other.

I guess this is why we don’t or should not time travel to the past as it can muck everything up and Alec seems to have stepped in it when he tries to save the woman he loves. Is Emily really worth it? Also, with Escher now dying in this manner, what does that do the timeline. And I guess there should be no issues with two Keira’s now.

So I am guessing the season 3 arc somehow involves Keira deciding which Alec to keep in order to have balance in the space-time continuum,