It is the season finale of Saving Hope and a lot went down tonight with a cliffhanger that I called last week. But lets get started with our last recap of season 2.

We first see Alex looking a little bit out of breath at the lobby of Hope-Zion. Charlie notices her and takes her pulse and says she is in afib. A checkup from Dawn is a little bit inclusive so she hooks up a heart monitor to see what is causing her arryhytmia.

Alex is back to work and her patient is one we have seen before: The Great Randall, who apparently had returned from Mexico with not only tequila for Alex and a hernia but magnets in his stomach. Alex manages to remove the magnets and Randall seems to be okay but there is some bad news. But we really don’t hear it yet as Randall is all hopped up on pain meds and starts to confuse Alex for his daughter Leslie.

Alex tells Maggie that she is going to call Leslie to come, which she does. Father-daughter are meeting for the first time in in 10 years and Alex wants to discuss treatment options. Randall’s pancreatic cancer has spread and there are problems with the hernia so surgery is required. Randall asks his daughter to wait for him and be there when he comes out. Leslie agrees after Randall reminds her of something he used to do when he is a child.

Prior to going into surgery, Randall finds out that Alex and Charlie have split because of the fact that he can see spirits. Randall tells Alex that she should take Charlie back as it will be good for her health. Before the surgery, Alex takes off her heart monitor, which alerts Dawn but she lets Alex perform the surgery.

During the surgery, Alex and Maggie discover that Randall has a tumour in the colon and he never had pancreatic cancer and Randall might just end up being okay and not on death’s door as everyone thought.

When Alex tells Leslie this news, she doesn’t seem to happy as she only came to see her father before he died. Leslie can’t seem to forgive Randall but Alex tells that maybe she should as they could have a better relationship. 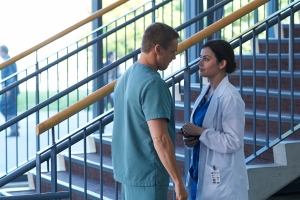 Alex then sees Charlie as asks about his conflict resolution class (see below more more details). Charlie tells Alex that it went find and he notices that she isn’t wearing her heart monitor. Charlie puts it back on and the two seem to share loving looks but Alex breaks the moment and leaves.

Back in Randall’s room, Alex and Maggie tell him that he has colon cancer and they can treat it. This news brings Randall closer with his daughter.

Later Charlie visits Randall where he tells the psychic that he no longer sees spirits. Randall tells him that he releases Charlie from his curse that even though he no longer sees dead people, he still has the guilt inside him.

Because of Charlie punching Joel in the face in the last episode, Dawn has ordered him to take conflict resolution classes or she won’t let him work. After unsuccessfully trying to get Gavin to sign the form without attending conflict resolution, Charlie attends.

What we see in this class is Gavin impersonating Joel to get Charlie to say what their conflict was about. When talk turns to Alex, we see that it is the root cause of it. When Gavin and Charlie are alone, Charlie confesses that he blew it and he misses Alex and this doesn’t make him angry but sad. With that statement, Gavin signs off on the sheet. 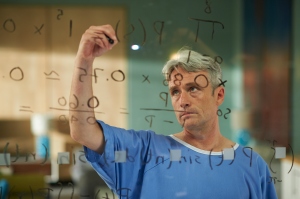 Joel’s patient is an actuary named Ian (David Storch) who is in Hope-Zion with a pretty bad ankle that Joel repaired. However, Ian’ recovery is impeded with him sleeping walking and putting pressure on the ankle. While Ian sleep walks, he wanders around Hope-Zion scribbling mathematical equations on the walls or any surface he finds at Hope-Zion. Dawn hilariously calls these nerd graffiti.

Joel re-fixes Ian’s leg and goes to Shahir to wonder what could be causing the sleepwalking. Shahir believes it is some unresolved trauma that Ian needs to resolve. Shahir also mentions to Joel what came out of the conflict resolution class to him.

Joel takes Ian to the doctor’s lounge and asks what do the equations mean. Ian describes them and it all stems to him losing his son from being hit by a truck, his marriage crumbling and him losing his job.

Back in Ian’s room, he tells Joel that the odds are getting better for him to get back with Alex. Joel tells him to rest and he will be there to keep an eye on him. However, Joel has drifted asleep and when he wakes up Ian is gone.

Joel starts to track him down. And we see Alex go to the on call room to get some rest but there is Ian carving out equations with scissors. When Alex tries to get him to leave, Ian stabs her in the chest and Alex crumbles to the floor bleeding with scissors sticking out of her chest.

Alex is lying there bleeding out calling for help but no one hears. Dawn then notices her heart monitor go erratic and calls Alex but can’t really hear where Alex is. Dawn and Maggie search the halls of Hope-Zion for Alex and Alex manages to move her way to the room’s alarm to alert to her presence. Dawn and Maggie arrive and spring into action to save her life.

We see Joel look at Ian wake up with a really bloody hospital gown and Charlie receiving a text alerting to Alex’s situation.

Dawn and Maggie rush her into surgery while Charlie is there begging Alex to stay awake and stay with him. Charlie professes his love but Alex is slipping away. Dawn and Maggie take over and we see those light flares again. Alex starts to code and we end the season with Charlie seeing the spirit of Alex and her whispering his name.

And Saving Hope has gone there with Alex. This is what I wrote when I posted the preview images to the season finale: “Let’s hope that the cliffhanger is not Alex going into a coma and Charlie being able to see her spirit. If that happens the the show has jumped the shark in its young life.”

I am not happy with that but it seemed that episode was heading in that direction and we still don’t have a resolution to the Joel-Alex-Charlie love triangle. So I guess Daniel Gillies is going to be on two shows at once.

What I see happening in season 3 is of course Alex is going to pull through. I mean she has to because she is played by the sublime Erica Durance who is the freaking star of the show. I think season 3 will be about Charlie embracing that he can see dead people and Alex being supportive of this gift because she was part of it.

I don’t know when CTV will air season 3 of I’ve heard that the show won’t start filming again until June. Until next time…