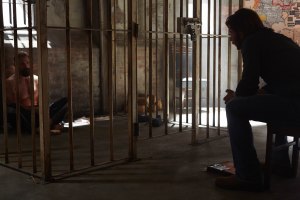 The following recap and review contains spoilers for season 1 of Bitten that won’t air in the US until two days later.

So if you don’t want to know what happens, stop reading now. If you do, please read away.

Elena and Clay are cleaning up Stonehaven’s kitchen of all signs of Antonio’s death. Elena is sick of all the deaths that surrounds them and both feel that they’ve failed Antonio.

Speaking on Antonio, at Nick’s new club, he meets with his cousin Jorge (Saving Hope’s Benjamin Ayers) who is obviously a werewolf too, to get his help in closing out Antonio’s human life. Later on, Nick has sex with his assistant and I don’t quite understand why we needed this scene because to me it was a bit unnecessary.

When Elena visits Jeremy, he is burning up and he surmises that when he was stabbed by Leblanc, it was with a poisoned knife.

Elena and Clay decide to question Cain in the Stonehaven jail as to what was Jeremy poisoned with. Unfortunately, Cain has turned into a wolf and therefore is not so chatty. So Elena decides to track down the woman that was at the scene to see what she knows.

In Toronto, Sylvie has managed to clean up the footage but she notes that their could be trouble with it as the man that shot the video was most likely wanting to film a couple having sex as the camera catches clothes neatly folded at the scene. Philip notices something in the video that Sylvie catches but he brushes it off as some more problems in using the video for the ad campaign. Sylvie says that she and Philip make a good team and makes a pass at him that Philip rebuffs. However, Sylvie observes that if things were going so well with him and Elena then why did Philip call her to help him with the video.

Later, Philip watches the video again while taking a look of pictures of Elena where he confirms that the necklace that he gave Elena was amongst the folded clothes.

So while Elena arrives at the trailer park that Cain and his girlfriend Amber are, Philip calls her and acts all mysterious to Elena. Their conversation frankly leads no where. When Philip seeks out Nate, the guy that shot the wolf video for more footage, he is greeted with an empty apartment. The super, who I will call Joey Jeremiah considering he is played by Pat Mastroianni, tells Philip that this place belonged to a recluse elderly lady that died last month. And that is all I am going to say about Philip’s part of the episode.

Back at Stonehaven, Cain is still in wolf form but Clay has dealt with something like this before so he drugs Cain in wolf form. When Cain wakes up, he is tied up in human form in such a way that when he changes to wolf, his arms would pop out. Even in that state Cain is still not talking about what Jeremy was poisoned with and where Leblanc, Marsters and Santos are. Cain even taunts Clay about killing Pete. When Clay asks about the girl at the scene, Cain says that she is a nobody junkie that she doesn’t care about. However, we know that is a lie because when Elena calls Clay to say she has found her, Cain looks concerned.

Before Clay can resume his interrogation of Cain, he shares a sweet father-son moment with Jeremy that involves Jeremy telling a story of some tough love his dad gave him.

The interrogation is interrupted when Sheriff Morgan comes by to ask Clay questions about Braxton’s murder so Clay goes with the sheriff back to the station.

Elena eventually follows Amber to the Bear Valley diner. Elena is shocked to discover that Cain told Amber about werewolves. Elena tells her that according to Pack rules, they have to kill her because she knows of their existence. Amber talks about how she wants to be like her and has asked repeatedly for Cain to bite her. But Cain refuses because he fears that she won’t survive the change and he doesn’t want to lose her. But this meeting with Amber wasn’t accidental as it was a way to lure Elena so that Marsters and Leblanc can have a chat with her.

The end result of the chat between Elena and the two Mutts is a broken wrist for Leblanc to get him to reveal that he poisoned Jeremy with ricin.

Elena returns to Stonehaven and tells Jeremy what he was poisoned with ricin and asks what they need to do. Jeremy says a blood transfusion is in order and Elena gives Jeremy her blood and luckily they are compatible.

When Clay returns from the sheriff’s station, Elena lights into him about how Clay bit her four years ago and starts to compare their relationship to Cain’s and Amber’s. Elena seems disgusted that Clay had no regard to whether she would survive the change or not while Cain was so worried about her and calls that real love.

In the final interrogation of Cain, Cain talks about the future that he envisioned for him and Amber, even calling her his soulmate. But those words seem to unmove Clay who doesn’t forgive Cain for killing Pete but just before killing Cain, he manages get Cain to say that Marsters has hired Justin Koenig to come after the pack.

Later, Clay tells Elena that their situation is different between that of Amber and Cain and something about they have is real.

When everyone is together at Stonehaven, Nick assures a recovering Jeremy that Logan will come back and also says that he can’t replace his father’s role in the Pack nor does he want to but he wants to be the one that kills the Mutts that killed his father. When Clay mentions Koenig to everyone, Elena asks who that is. Koenig used to be in the Pack and was responsible for building the files on all the Mutts and that he is a ruthless killer.

So it seems next week, we are getting ready for an all out war between the Pack and the Mutts. Questions remain though, like will Amber be killed now that Cain is not there to protect her? Will we ever care about anything that Philip does on the show? And based on a description of next week’s episode of Bitten on my PVR, it sounds like Clay and Elena might hook up again. We will see.