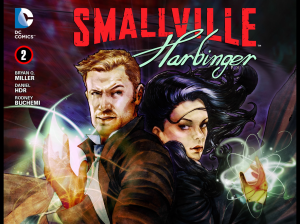 In the latest companion Smallville season 11 comic arc, Zatanna plays a central role. But before we get to that, Tess and and Wonder Woman are talking about the need to have some that can deal with magic helping with the DEO. Tess knows the right person: Zatanna Zatara.

We see Zatana performing her magic show in London. While she pulls an audience member to the stage and levitates him. A heckler calls her out as a fraud. Zatanna agrees that this levitation was a trick using invisible wires. People are starting to get angry and demand their money back but she uses her magic to levitate the heckler. This gets applause from the crowd.

When Zatanna is finished meeting with young fans, she encounter a man with weird paint on this face. The two get into a magic fight. This man manages to subdue Zatanna and he mentions Brother Blood (I am interested in seeing Smallville’s interpretation of this character after seeing what Arrow is doing). But Zatanna is saved by a mystery man that goes by the name Johnny. We of course now that this is John Constatine.

Issue two opens with two London coppers bringing in the dude from the last issue. The cops are relieved that this guy, who later know is called Acolyte 5, has his hand melded together thus can’t perform any magic on them.

However, whole bunch of people, men and women, with the same paint on their face, attack the paddy wagon and the two officers all of sudden have blood gushing from their eyes just like the people who get injected with Mirakaru in Arrow. This group takes in Acolyte Fifth so that Brother Blood can have a word from him.

Meanwhile, Zatanna and John Constantine are getting to know. Talk turns to Zatanna’s father and her work in correcting all his messes, which include the events of season 9’s “Warrior”. It seems that Constantine has collected some stuff from Zatanna’s father that includes his spell book but it was stolen by a bunch of cultists. Zatanna performs a spell and manages to see who was responsible. It is that group with painted faces.

They then visit Acolyte Fifth’s apartment to see if they can find the spell book. The two argue over who owns the book and Zatanna casts a dragon after him but Constantine evades her spell.

We then see Acolyte Fifth meeting with Brother Blood who is not happy about Zatanna and Constantine being on the scene and he then burns Acolyte Fifth to a crisp and mentions the name Trigon. And in the background we see a girl tied ready to be sacrificed.

As Issue 3 opens, Zatanna and Constantine have arrived at Brother Blood where we see the charred body of Acolyte Fifth. Both seem to be aware that what has happened is the work of the Demon Trigon, whom Constantine has called the ruler of the Eighth Circle of Hell. Zatanna wonders what would Trigon want with the girl that we saw tied up in the last issue. Zatanna uses a locator spell to find her as well as Blood and his followers. Constantine seems to be asking no one for help but a spell from Zatanna later, we see that he was talking to the ghosts of everyone that he got killed.

Meanwhile, at Stonehenge we see Brother Blood getting ready for the sacrifice. Zatanna and Constantine scope out the situation and come up with a plan of attack. This involves the two flying in and stopping this ritualistic sacrifice for Trigon. But at the last moment, Zatanna casts a spell and this girl is saved. Brother Blood’s Acolytes start to attack Constantine and Zatanna but the two hold them off.

However, Blood won’t be stopped so he sacrifices himself and out of this body a whole bunch of demons emerge. While Zatanna goes to untie the girl, she implores Constantine for some help but he just runs off with her dad’s spell book.

With that we see the demons give chase to Zatanna and the girl.

As “Harbinger” concludes, we see Constantine steal a jeep wanting to escape and keeps muttering how he won’t get involved. While back within in Stonehenge, we see Zatanna and the girl being chased by the Seven Deadly sins who are after the girl. They want the girl because something to do with her mother, who was a follower of Blood. We see these demons going after Blood’s followers while trying to reach the girl. Zatanna casts a spell to take down two of them then Constantine does get involved and performs an exorcism to take out the rest. Now safe, Zatanna takes the girl to San Francisco to join Jay Garrick’s special school, we see the Teen Titans there to greet her warmly. We see Connor, Megan, Jaime, Mia and the Wonder Twins all there. At first the girl is not so friend but eventually tells them her name: Rachel Roth aka Raven.

At the airport bar, Zatanna tells Constantine about joining the DEO to help them out while he returns back to London via closet at said bar. When the DEO comes a knocking to recruit him, Constantine turns them into frogs and drops their badges into a ever growing bucket full of them. Thus ends this Smallville side arc.

No offence to Bryan Q. Miller, I mean I love the guy for continuing one of my favorite TV shows in comic book form, but I wasn’t feeling “Harbinger”. I felt like we got to know next to nothing about John Constantine and I didn’t feel any stakes were being had despite the girl sacrifice. I think part of the problem is Arrow has introduced Brother Blood this season and that character is way more interesting than the one portrayed here.

And Zatanna being the focus of this side arc maybe wasn’t such a good thing. The show never really developed this character into someone I could care about and I definitely didn’t like her when she put a spell on Clark to hit on him. It would have been nice to see the character more on the show being part of the Justice League instead of hearing what she has done.

Also, the girl, I feel that the arc didn’t fully explain why she is important and why is her mother important. And having her being revealed at the end as Raven, sure was surprising, but doesn’t really mean anything to me. I liked how in “Effigy” we actually got a bit of back story on Megan hence we could care about her. But not feeling with how Raven was introduced. Are we supposed to figure out that she is Raven from how she was talking about herself, in particular because Trigon is part of this arc. I learned from Wikipedia that Raven is the daughter of Trigon.

Hopefully the next side arc will be more interesting.