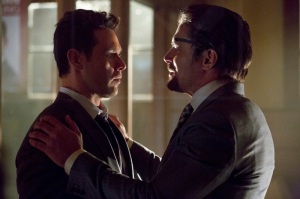 Tonight’s Arrow had Katie Cassidy’s Laurel Lance front and center of all the action as she seeks out the Arrow’s help to prove that Sebastian Blood is bad news.

Speaking of Blood, he goes to St. Walter’s to visit his “aunt”. The staff there admire him for visiting Maya. The crux of his visit is he wants to know what his mother told Laurel. Maya replies the truth that Blood killed his father and that she is his mother. Blood says that he forgives her for telling the truth and when he leaves, I thought “oh good, he didn’t kill her”. But I spoke too soon as Blood soon returns to her room with skull mask on to kill her.

Meanwhile, Arrow is targeting another low-life criminal to find out the identity of the man in the skull mask but this guy too doesn’t know. Felicity later suggests taking another route to finding this guy’s identity than scaring the crap out of criminals.

At the DA’s office, Laurel, after popping some pills, receives a phone call from St. Walter’s telling her that Maya died of heart failure. Immediately this raises a red flag in her mind. She goes to Adam Donner with her suspicions but Donner doesn’t believe that the “Saint of Starling City” could be behind the death of this “aunt”.

So with nowhere else to turn, Laurel gets her dad to arrange a meeting with Arrow. On a rooftop, Arrow is initially skeptical of Laurel wanting his help thinking it another trap; Laurel says that she deserved that. Laurel then explains her suspicions on gold and his connection to Cyrus Gold amongst other things.

Oliver meets with team Arrow to go over the file that contains a case number pertaining to the death of Blood’s father. Diggle thinks that Laurel is setting up another trap for Oliver and wonders why he is investigating Blood, whom he considers a friend.

Oliver then pays a visit to said friend on the pretext of being worried about Laurel but Blood sees him as a jealous ex-boyfriend. Oliver says that he is just a friend looking out for her but Sebastian says that he will take care of Laurel.

Later Felicity comes back with some good news and bad news. She managed to find something on the case file but unfortunately no digital copy and the only physical copy is housed at Starling City’s Archives that can only accessed via key card. Oliver knows he needs Laurel’s help to break-in.

At home, Laurel is popping some more pills when Arrow pays her a visit and asks for her help. She immediately jumps into action and the two break into the Archives. However, the security guards manage to re-activate the cameras that Felicity took down and the police quickly arrive. Laurel searches for the file and finds it as the police arrive on the scene. Arrow holds them off and the two escape. When Laurel opens the file it is empty.

When Felicity goes over the security footage to see who could have possibly stolen the file, we see the footage cut out. But we find out it was Slade that took the file. He pays a visit to Blood in his alderman office not happy with all the screw-ups that he has been causing. Slade says Blood’s mother wasn’t the problem but it is Laurel Lance. We learn that Slade tasked Blood to get close to Laurel in order to hurt the Arrow. Slade then asks Blood to take care of Laurel. Blood calls that corrupt cop, Officer Daly to help him.

And that help involves breaking into Laurel’s apartment and ransacking it. When Laurel arrives home, she finds Daly there with a warrant for her arrest for illegal possession of drugs (she had her father’s prescription).

At the police station, Lance visits his daughter and Laurel starts talking about her suspicions on Blood and that he is framing her. But as she is talking, she is coming across as a crazy person. Lance sees that his daughter is in denial about her addiction and doesn’t believe her when she begs him too. Outside the interrogation room, Oliver tells Lance that he will make sure that Laurel makes it home okay.

When he brings her back home, Laurel waits for the lecture from Oliver. When it finally comes, Laurel gets more in denial and doesn’t want to talk further. She asks for a glass of water but when Oliver returns, he gets knocked out and the man in the skull mask and his henchmen kidnap Laurel.

Oliver comes to and sees written on the wall in what looks like blood “Enemies of the Heir Beware, the Chamber of Secrets has been Open”. Just kidding but that was what the writing looked like. It was basically a message to the Arrow telling him to go to the Starling Cannery.

At the Starling Cannery, Laurel calls out Blood, thinking he is in the mask. But the man in the skull mask says that her accusation are unfounded and just when it looks like he is going to kill her. Arrow comes on the scene. A fight ensues and the man in the skull mask gets the upper hand and is about to shoot Arrow when Laurel puts several bullets in him. Laurel then wants the Arrow to peel away the mask to see that it is Blood. But I had a feeling that it wasn’t going to be Blood and I was right. It was Daly.

Back at the precinct, Lance tells Laurel that Daly was behind everything that Blood had done. Laurel can’t believe that she was wrong. Donner then comes to talk to Laurel to tell her that she is fired. Poor Laurel, her life is just spiralling down. But kudos to Katie Cassidy. She was really good tonight.

At the Arrow Cave, Oliver is thankful that Laurel saved his life and admits that he believed Laurel’s accusations on Blood because he has always had a blind spot when it comes to her but tells his gang that this will be no more. Diggle thinks with Daly being dead that this ends the Mirakura problem but there is still the matter of Roy. More on that later.

Meanwhile, Blood and a few of his henchmen visit Slade’s office to tell them that they are in the clear as Daly took the fall for everything. However, Slade isn’t pleased because he comes in full Deathstroke suit and kills all of Blood’s henchmen and warns Blood that he needs to be more careful or he will be killed next. And I have to say that the Deathstroke suit is kick ass. The look reminds of the Deathstroke with the mask on and without the mask that we see in the Infinite Crisis: Gods Among Us iPad video game. And I love it.

But so much more happened in this episode. Lets start with…

Oliver and Sara have returned to the plane seeking Slade, who is no where to be found. Sara wants to take the deal with Ivo because not only can he get them home but he has been kind to her and saved her. Oliver thinks it is crazy to trust Ivo. As the settle in for the night, Sara says the thing that she misses about home is her bed but she believes and she and Oliver will never see their beds again. Oliver won’t let her be so morbid so instead they talk about a long ago party at Tommy’s that Sara snuck out to go to because she had a major crush on Oliver. Sara says that Laurel knew about her crush and sent their dad out to get her. Sara was grounded for a month and after that she found out that Laurel and Oliver were together as a couple. Oliver finds it hard to believe that Laurel could be so vindictive.

When Oliver is sleeping, Sara sneaks out to talk to Ivo. Ivo is happy to hear from her. Sara thanks Ivo for saving her and letting her be a part of his work. Ivo actually says that he should thank her for saving him. It is all touching until Sara tells him that she rather die than be tortured like he tortured those on the plane. Ivo then turns nasty and vows to kill her and Oliver. Oliver finds Sara with a look of disappointment but Sara tells Oliver that they should resume their search for Slade.

Back to the present day, Roy has turned to Sin about his super strength and the two decide that they will use it to take down bad guys without the help of the Arrow. When Sin drops by Verdant with a potential bad guy (a lawyer aka the Starling Slasher that likes to kill prostitutes), Roy decides that Sin should be the bait. Thea, unwittingly helps out with their mission by providing Sin’s outfit.

At Verdant, Oliver asks Thea if everything is okay with Roy. Thea mentions Roy putting someone in the hospital but not knowing the full truth and wishes he would talk to her. Oliver believes he knows someone who he can talk to.

As Arrow, Oliver pays Roy and visit and tells him that he knows about his strength and mentions his experience with it and how it can change him for the worse. Arrow then offers to train Roy to help him control his strength. Roy asks when can they begin.

And this leads us to next week were we see Roy undergo his training and start to be part of missions and there seems to be a clear indication that Roy might be let in on Oliver’s secret.