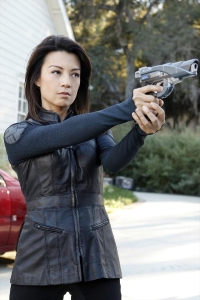 This week we learn why Melinda May is called the Cavalry. But before we get to any of that, we start our action are in Bakesville, Utah. A young woman, whose name we later learn is Hannah Hitchins, walks into a gas station. She is buying some essentials like toilet paper and such but the clerk won’t serve her. You see, she is on the front page of a newspaper article with the headlines that scream laboratory accident kills 4 with her picture in the front.

This clerk blames her for the death of his friend. He gets quite aggressive with her when she wants to leave. All of a sudden cans are flying towards the clerk and a shelving unit falls on him. She runs out upset when she notices gasoline trailing on the ground. Soon enough the gas station explodes.

Meanwhile, back in Seville, Spain, we see that Melinda and Ward did indeed hookup. There is no morning after glow but all business as Melinda leaves Ward to get to their next mission.

Coulson briefs the team on Hannah and we learn that she is a safety inspector at a Particle Accelerator, I am assuming a different one than the one that appears in Arrow. Anyways, an explosion happened on her watch. Coulson wants Melinda and Ward to go in and retrieve Hannah while Skye wants to as she feels that she can better relate to Hannah on a human level. Coulson disagrees.

They go to her home, where a neighbourhood mob wants her head. As the crowd gets more aggressive, she gets more upset and all of a sudden a cop car start to veer towards Coulson.

FitzSimmons are tasked to find out what happened at the Particle Accelerator facility and there begins the subplot of tonight’s episode. FitzSimmons wax nostalgic on being pranked while at SHIELD Academy and missed out on pranking someone. They decide to try and prank Skye.

Back on the Bus, Hannah is in a special containment field to protect the team from her potential telekinetic powers. Melinda and Coulson go in to question her. Hannah explains what happened at the facility and how she triple checked everything yet something still happened and she feels extreme guilt over what happened. Coulson tells her that the accident may have given her telekinetic powers but Hannah believes that God is punishing her.

As FitzSimmons investigate their findings, Skye comments how cold Melinda is and FitzSimmons decides to tell her how Melinda got the Cavalry nickname. They spin a really tall tale on how Melinda rode horseback into a mission taking out hundreds of bad guys at once.

In Coulson’s office, Skye wants to go in and talk to Hannah but he still is doesn’t want her to when all of a sudden a baseball that is supposed to be nailed down gets knocked over.

In the Bus’ kitchen, Ward is making himself a sandwich with Skye chattering on about why Melinda is called the Calvary. Ward actually tells her the truth in that it wasn’t an hundreds of people on horseback but just 20 people. Skye suggests to Ward that what would make Melinda chill is if she got laid. Ward stops making his dinner for a second. Skye also shares with Ward something she found out about one of the people that got killed. A Tobias Ford apparently had gone to Hannah three times about safety concerns and believe that perhaps Hannah ignored them. When Skye leaves, Ward then wonders where his knife is.

Simmons has a breakthrough in what has happened. She notices in the explosion there seems to be a tear of sorts and wonders what it is. All of a sudden a man appears and goes and attacks Simmons but disappears again. We see that this is Tobias Ford.

Tobias later sabotages the plane and it starts to go down. Melinda manages to land the Bus safely and redirects any power they have to protect Hannah as they believe that she is in danger from Tobias.

Skye convinces Coulson let her tells Hannah that she isn’t at fault for anything that has happened. Skye goes and talks to Hannah through the Cage’s doors and tells her she is not at fault. But Hannah still feels guilt and asks Skye if she believes in God. Skye doesn’t but Hannah does and see everything that is happening to her as God punishing her. Skye does tell Hannah one thing she learned from the nuns at the orphanage and that is God is love. Melinda listens in to Skye’s word thus furthering my belief that Melinda is her mom.

Coulson tries to send out a distress signal in his office but Tobias sabotages that.

Melinda takes over guard from Skye and Skye goes to Coulson’s office where Coulson tells the real story of Melinda. It was a mission that he was on. It was a rescue mission and she went in unarmed. They were supposed to save people from a gifted person but it went wrong and a civilian woman got killed. Now this is where my theory of Melinda being Skye’s mom might go out the window. There is a possibility that the civilian woman was Skye’s mom. Anyways, Melinda goes back in, takes care of the problem but comes out a changed woman. Gone is the fun, pranking, defying the rules woman (Coulson points out how it is much like Skye) and out came the Melinda we see now. Power further goes out and Skye and Coulson are trapped.

In the belly of the Bus, FitzSimmons and Ward are looking for Tobias. FitzSimmons believes that the events that happened in Thor:The Dark World )I am assuming since they mentioned a space ship arriving in London) created some sort of portal and now Tobias is passing through Earth and alien worlds. Ward and Tobias have a fight and eventually Ward and FitzSimmons get trapped in a utility closet.

Eventually, Fitz manages to help Coulson and Skye get free who in turn free FitzSimmons and Ward.

While all this is happening, Melinda manages to be warned about Tobias, who is about to strike her but she escapes and grabs Hannah and they make a run for it in the forest and end up in a barn.

Skye eventually figures out that Tobias isn’t out to get Hannah as revenge but actually has a crush on her and everything he has done is to protect her.

Melinda figures this out too. While she was fighting Tobias, a beam was about to fall on Hannah but Tobias saves her. Tobias confesses that he sabotaged the valve and that his complaints were just a ruse to get her to come down to his area of the facility just so he can spend time with her. Melinda talks to Tobias and convinces him to let go of who he used to be so he can move on. Tobias does so and he materializes away.

Coulson asks Melinda what she told Tobias and she replies the same thing he said to her back on that mission.

After everything is over, Coulson tells Skye that she was right in wanting to handle Hannah as she seems to have right touch, the human touch in dealing with cases like Hannah where they have to bring in someone. He tells that someday soon she could lead that intake team where she could give it a better name.

Later, Skye pays Melinda a visit in the cockpit of the Bus and again I feel that this is some sort of mother-daughter moment.

In the post credit scene, Coulson, Skye, Ward and Simmons are playing Scrabble when Fitz comes in with shaving cream on his face. He is mad at being pranked. Everyone there denies being responsible. Back in the cockpit, we see Melinda with a smile on her face that maybe the old prankster in her is coming back.

Despite learning why Melinda is called the Calvary, I still feel like we don’t know much about her. I know I keep harping on this theory that I have but I think it would be real cool that I predicted this. But I love seeing a kick-ass Ming-Na Wen. Have been a fan since she played unsure med student Deb Chen on ER.

And this episode was nary a mention of Coulson’s death at the hands of Asgardian or how Tahiti is a magical place.

Maybe the mid-season finale in a couple weeks will provide some answers to my questions.