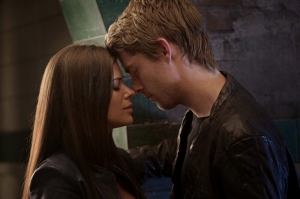 Stephen is seen running on a rooftop chasing someone like him. They do their teleport thing and each start using the Force push on each other. Stephen tries to reason with this young man saying he is just like him and not out to hurt him but he doesn’t believe. This young man eventually uses the Force push to push Stephen off the rooftop.

We are then taken back to three days earlier with Stephen’s mom waking him up and tossing him his refill of his meds. His mom tells him to take care of his brother Luca as she has to work a double shift at the hospital and to clean his room. In voice over, we see Stephen explain the pros and cons of his powers. The pro being able to use the Force to clean his room and the con not quite apparating where he wants to.

At school he makes plans to hang out with Astrid and then we see him at his after school job at Ultra. According to Stephen the outside world thinks Ultra is some sort of scientific research company not an organization out hunting the Tomorrow People. We see him go through training and see his handler, Agent Vaughn (Carter Macintyre) testing him and we find out that other Tomorrow People can read each others minds and just as Vaughn is able to see Stephen’s thoughts/memories. in particular his encounter with Cara about Jedikiah asking him to work for Ultra. Stephen realizes that he could expose his encounter and knowledge of the Tomorrow People that he leaves the room.

Jedikiah stops Stephen before he can leave and takes him to Ultra’s nerve center whose sole purpose to track breakthroughs and other Tomorrow People.

We then switch the action to a bank robbery in progress. We see one of the security guards robbing it but he insists that he is not in control of his actions We then see the young man at the beginning of the episode controlling like how the imperious curse works and the young man as successfully gotten away with it.

Stephen realizing that he could have put his new found friends in trouble goes out to seek Cara in the subway car where he first met others of his kind. When Cara is unresponsive, Stephen apparates himself to their Underground lair.

He doesn’t not receive a very warm response from anyone. Stephen tells Cara, Russell and John how he almost exposed them and that he came to warn them about what Jedikiah is up to. John isn’t listening to him, seeing Stephen as a traitor and that while he continues to work for Ultra, he is putting everyone in danger. Stephen mentions that he working for Ultra to protect his family but John says they all made similar sacrifices like Cara abandoning her younger sister.

Stephen arrives home and is in big trouble because he didn’t do has promised meaning that he didn’t pick up his brother and forgot to hang with Astrid. His mom is pissed and also angry that he threw his pills away. She is afraid that she is going through the same situation with him as she did with her father. Stephen reassures him that he is fine and doesn’t need the pills or a shrink. After his mom pleas to try and make an effort because all they have is each other, Stephen promises to try and they hug. When he does, he sees one of his mom’s memory and that is of his father leaving her despite her pleading him not to as they can move again or get a better job. But he coldly says he is leaving because he doesn’t love her. Ouch.

At the lair, TIM manages to find the identity of this young man, a 17-year old runaway, Kurt Rundle, whose mom filed a missing person’s report. Cara can’t help him until his powers fully come up and the team decide to wait until he robs another bank before they bring him in.

When romantic plans for Cara and John don’t work out and John leaves, Cara asks TIM to help her find John’s D-chip. When she does, it is a watch.

Cara then reaches out to Stephen just as he is getting out of the shower. They meet at a dinner where Cara gives him the watch. The D-chip deflects telepathic signals so no one will know what he is thinking. Stephen then confides to Cara about the memory he saw of his dad leaving and feels he is making a mistaking in trying to find him.

John then telepathically talks to Cara saying that Kurt has robbed an armour truck. They and Russell try and bring him in but Kurt is spooked and uses his powers to escape. As the police converge on the scene, the trio escape too.

Back at Ultra, they too have discovered the identity of Kurt after listening to another guard say that he was being controlled. Jedikiah sends Vaughn to bring Kurt in but Stephen wants to come along and evenutally Jedikiah lets him.

We see John and Cara do some training and flirty fighting over her meeting Stephen and giving him his watch. Their argument is she wants to protect Stephen because he is the Chosen One and John just wants to protect his people.

At Kurt’s mom’s house, Vaughn is asking questions to her under the guise of being truant officers but Stephen keeps on interrupting so Vaughn gets him to search Kurt’s room. Stephen hears Kurt’s mind in the crawl space above his room. He mind tells Vaughn this and after tasering Kurt’s mom, Ultra men come in to kill Kurt because Vaughn and Stephen can’t. Stephen is appalled at this turn of events because he thought that Ultra was about bringing people like him in and angrily confronts his uncle on the genocide he is committing. Jedikiah defends his actions on the shadow where people his people and his.

Stephen then meets up with Cara, John and Russell atop Smallville’s Oliver Queen’s penthouse (if you’ve seen that show then you will know what I mean. If you don’t then it is a clock tower). He tells the main Tomorrow People trio about Jedikiah’s plans for Kurt and that they need to rescue him. John is against that idea and all he wants is to keep his people alive. And the three leave.

Back at home, Stephen gets his mom to open up about what happened with his dad and why did they change their name. His mom mentions how they kept moving from city to city being on the run but when they settled in New York City thought that they were done but turns out he was done with her. And she was scared that he is going through what his father went through.

Russell and Cara come to their senses and tells John that they are going to help Stephen bring in Kurt because there was a time that John did something similar with her. Russell and Cara believe that they need to start to fight.

Eventually, Stephen finds Kurt on the roof top of a building under construction across from his house (thanks to a conversation he had with Vaughn). He tells Kurt that he understands him, that their is a paranormal underground and is just like him but Kurt believe him. Stephen keeps on trying to relate to him but it isn’t working an when Vaughn shows up on the scene, Kurt really believes that they will kill him and the chase is on through this building. Stephen actually stops Vaughn and we are then to scene where we saw at the beginning of the episode.

John rescues Stephen before he can topple over and Cara goes to get Kurt. She tells him her story of when her powers started to emerge, how she too stole and lived hand to mouth before eventually people like her (meaning John) brought her in. The two fight and Cara knocks him out. Kurt is brought to the underground lair and seems to be fitting in nicely.

Back at Ultra, Jedikiah is pissed that Kurt got away and when Stephen says he doesn’t know anything, it does seem that he believes him but before he lets Stephen get debriefed by a young woman (no name given in tonight’s episode) like him, he takes Stephen’s watch, which we learn was his father’s, and Jedikiah opens it to reveal the D-chip. Stephen is worried that this woman can read minds and asks Cara for some Occulmency lessons. Her tip is to think of a memory that is so overwhelming that will prevent him from revealing the truth.

The interrogation begins and Stephen passes with flying colours. Jedikiah is happy that he passed and gives Stephen back his dad’s watch. Stephen asks not to blame Vaughn for what happened. Jedikiah tells Stephen not to worry about Vaughn. When Stephen tries and call Vaughn, we see his body in the morgue.

Stephen then thinks that has made a mistake in working for Ultra and thinks he can’t do it because people he cares about will get hurt or killed. But John believes that him working for Ultra will help them, also help him find his father and protect those he loves.

Stephen is convinced to remain a double agent and he later shares with Cara (who have met in a Chinese restaurant) that he wants to find his dad so his last memory isn’t him leaving his family. In the ending voice over, we see Stephen vow to be a better brother, son, friend to both his species and to do his best at Ultra so he can help the Tomorrow People.

After watching the second episode, I have come to the conclusion that I really like this show. It is a nice mix of Harry Potter/Star Wars with the powers and I like the stakes of the show but I could have done without Cara saying that Stephen is the Chosen One – that reminds me too much of Harry Potter/Star Wars. I really like the special effects of the teleportation but I think I am not going to like the triangle they are building between Stephen, Cara and John.

Some parting questions: will Luca turn out to be a Tomorrow People? It does seem that Stephen’s mom doesn’t know the truth about his dad but is that really the case? Will Astrid have a purpose other than just being the friend with unrequited feelings for Stephen? Let me know your thoughts in the comments.