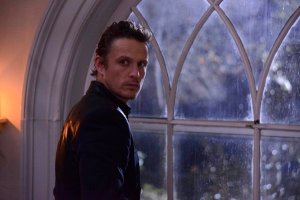 In tonight’s episode, Miles, Monroe and Aaron receive blasts from their pasts but before we can get to any of that, we open up tonight’s episode after a victory for Miles and the Georgia Federation Army versus the Monroe Public but loss of life on both sides occurs.

Meanwhile, Baker (Mark Pellegrino) is debriefing Monroe on what Miles has accomplished. Monroe decides that Miles needs to be killed now and doesn’t want to wait anymore. He decides to let Miles find him to accomplish his task. What he does is arrive in his hometown.

We also see another part of this new world as Aaron and Rachel have made their way to the Plains Nation, which is what used to be Missouri.

In the Plains Nation, Rachel is trying to decipher Dr. Warren’s book. Aaron offers to help her considering he has two doctorates from MIT but Rachel instead sends him off to get supplies. While he is out shopping, he sees his ex-wife Priscilla but when he tries to get to her, she disappears.

At the what is now the Rebel camp, Charlie is going over the weapons haul that when Miles walks in and asks about Charlie’s well-being. But Charlie doesn’t want to talk about that but about his relationship with her mom. Miles doesn’t get a chance to answer because a Militia messenger has a message for Miles. It is from Monroe who asks that Miles return to their hometown alone. If he doesn’t, he will start killing everyone there starting with Emma (Annie Wersching). We learn in a flashback that has young men both had a relationship/crush on her (Miles had the girl, Monroe had the crush).

Back to the present, Emma approaches Monroe with familiarity that he doesn’t appreciate and after seeing what her old friend has become; she is ushered into the town’s courthouse with the rest of the town to await their fate.

Monroe takes a walk down memory lane in his hometown. First stopping at the gravesite of his family, who all coincidentally died in 2010. Next stop is his childhood home where he remembers a moment he shared with Emma in their youth.

Back at the Rebel camp, one of the Georgia Federation soldiers manages to beat out where Miles went so him, Nora, Charlie and Jim are out to find him. Charlie is tagging along to make sure that Miles kills Monroe this time.

At Plains Nation, Aaron finally finds his wife at a dive bar but it isn’t quite the happy reunion he was hoping for. She introduces Aaron as an old friend to her new husband. Aaron wants to talk to Priscilla but she is very cold towards him and asks him to leave and says her goodbyes to him. Little does Aaron know that Priscilla is being held at gunpoint by her new husband, if he even is that.

Aaron’s spidey senses must have been tingling because he was right about his wife’s behaviour. When he manages to catch up to his wife, she finds she is being carted away by her “husband” who actually is a bounty hunter after Priscilla. The bounty hunter asks Aaron to leave and just went it looks like he is going to, he goes back and tries to beat the guy up but he gets the upper hand until Priscilla knocks her captor out. Apparently, Priscilla is wanted in the stabbing of a militia soldier who hurt someone she cared about. Aaron tries to apologize but she tells him everyone that he left her with died that left her feeling alone. Aaron wants Priscilla to come with him but she refuses as she doesn’t want to leave her 11-year old daughter, whom she was trying to protect that made her a wanted woman. She is off to Texas to reunite with her family but before she leaves, she forgives Aaron and both get the closure they need.

Meanwhile, Emma tries to appeal to whatever good is left in Monroe and after professing her love to him, she hopes that this will convince him to set the town free. Instead, he locks everyone in the basement and sets the town hall on fire.

Miles arrives at his hometown and very much aware that a trap has been set up for him. He begins taking Monroe’s men out but he is shot in the leg. He manages to arrive at the burning town hall and breaks the people free and is reunited with Emma. However, the fire continues to grow and Monroe’s men is peppering all the exits with gun fire making escape seemingly impossible.

Just when all hope is lost Nora, Charlie and Jim come to the rescue and the whole town escapes the burning building. Gunfire is exchanged but is put to a stop when Monroe takes Emma hostage. Everyone wants MIles to kill Monroe but Miles doesn’t want to accidentally hit Emma.

At the Georgia Federation Presidential compound, President Foster has signed an agreement to work with Neville to help keep an eye on/maintain Miles.

Not much movement happened in this week’s episode in terms of Rachel’s mission to get the power back on and the Miles/Monroe showdown wasn’t much too it. Hopefully, next week we start to move the action at hyper speed as we head to the season 1 finale.