Ever since Malcolm Merlyn mentioned the Undertaking way back in episode 9 “Year’s End” we finally get to see what exactly Merlyn is up to. Plus we get to flashback to before Oliver went on the Queen’s Gambit where he was a total douche who really was unworthy of Laurel’s love.

But before we get to any of that, tonight’s episode opens with Arrow going after account Harold Bachman that handles the money for people that does extortion and launders money in the Caymans. Arrow lets Bachman go so his bosses can deal with him but steals his laptop.

He brings Felicity the laptop to find information on it but there is a lot of encryption on it that will take a while for her to break through. She also asks Oliver whether or not he will make peace with Diggle. Oliver said that they both made choices in the Deadshot manner and they have to live with it.

At the mansion, Moira is on the phone with the insurance company wanting to pay out his life insurance but Moira has not given up hope.

We then flashback to before the Queen’s Gambit ill-fated yacht trip as Moira welcomes Malcolm and Frank for a meeting. Walter then drops by for some paperwork for Robert.

In this meeting, Frank mentions Adam Hunt and his crimes. Malcolm then talks about the increase of crime in the Glades (he even slams down on the table the book that will become the List) and how each one in the room were affected by the Glades. Malcolm then mentions the Undertaking about levelling the Glades to rebuild Starling City. Malcolm mentions using a natural disaster to destroy the Glades and speaks of a Unidact Industries that has something that can help him conjure a natural disaster but it will take 5 years to do. Robert does not look too pleased at Malcolm’s plans.

Back to the present, Laurel is at the club lamenting her breakup with Tommy. She confides the breakup to Oliver and wondered if Tommy mentioned anything. Oliver tells Laurel that Tommy probably has cold feet. They both talk about how their relationship failed because they didn’t communicate and Oliver encourages Laurel to talk to Tommy. Felicity then interrupts their conversation and Laurel and Felicity meet for the first time. Oliver tells Laurel that Felicity is at the club to help him set up his Internet router but Felicity really wants to show a large deposit found on the computer. They see that $2 million was paid out to someone on the day of Walter’s disappearance. They hope to use this information to find Walter and the name they come up with his: Dominic Alonzo who runs underground casinos.

Oliver doesn’t want Diggle to help out with this mission so Felicity volunteers herself, much to Oliver’s chagrin.

Back to 5 years ago, we see the Walter and Robert friendship as Walter is concerned for Robert. We then learn more about Malcolm’s motivation for the Undertaking and recounts the day of his wife’s, Rebecca, murder in the Glades. He tells Robert how one of Rebecca’s last voice mails to him was her dying after being shot.

Felicity then goes to visit Diggle at his apartment, who tells him about her lead on Walter. Diggle thinks Oliver sent her but she says that it isn’t the case. They talk about the Deadshot debacle but Felicity says that Oliver needs him but Diggle is waiting for Oliver to come and say those very words to him. Felicity leaves a bit dejected.

At Merlyn Global Group, Laurel visits Tommy to talk but Tommy is still cold to her. Laurel still loves Tommy and she believes that he loves her and they should talk about it and be truthful to each other so Tommy drops a truth bomb on her that she should be with Oliver as he is still in love with her.

It is mission night and Oliver and Felicity go over the plan. She is to be caught by Alonzo for card counting that would give her an opportunity to plant a bug on his computer so they can dig up more information to Walter’s whereabouts. Felicity hopes to get the friendly warning and not a bullet. Oliver will be her backup. 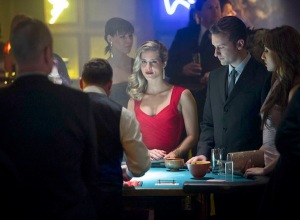 Felicity (who looks absolutely stunning) manages to gain entry into the underground casino and gives Oliver the lay of the land. Felicity quips that how can this be casino without slot machines. Then some hilarious double entendre dialogue occurs between Felicity and Oliver (well mostly on Felicity’s side) before she decides to shut her mouth and move onto a table game.

Moira and Malcolm meet, who tells Moira that the Markov device is ready and on its way to Starling City. Moira and Malcolm congratulate each other. Malcolm thanks Moira for her support while Moira wishes that Robert was here and it is revealed that Malcolm was responsible for Robert death.

We then flashback to a time after Moira and Robert have come back from a Ted Kord fundraiser and notices how quiet Robert has been. Robert then wants to talk about Robert’s plan to level the Glades and how he doesn’t plan in evacuating the neighbourhood. Robert then tells Moira about the factory that is now the Arrow Cave and how a city councilman wanted a bribe from him but he accidentally fell and was killed. Robert believes he is a murderer and that there is a list of names and the Undertaking will help him atone. Moira doesn’t think it will and begs Robert not to go through with it.

Back at the casino, Felicity is making out pretty well but the pit boss is not pleased and asks her to leave the game so he can meet the manager. Along the way to the manager, Felicity is being very funny as she narrates to Oliver her location.

In this meeting with the manager, Alonzo, he pretty much tells her to get out of his casino for card counting but before he lets her leave, he pretty much threatens her and her partner. Felicity warns that he hasn’t met her partner and Arrow comes busting into the casino where gunfire and arrows go flying. Arrow makes it to Alonzo’s office where he rescues Felicity then demands from Alonzo where Walter is who tells him that Walter is dead.

Moira and Thea are using the Microsoft Surface to do some online shopping when Oliver comes in to deliver the bad news on Walter. He tells his family that he got this news from one of Diggle’s army buddies who is now in the FBI. Moira is angry at hearing this news while Thea mourns.

Back in the past, Robert and Frank talk about how the Undertaking is wrong but both don’t want to wage a war against Malcolm as they will lose. Robert tells Frank of how Malcolm has bought several buildings in the Glades over the last several months using a company called Sagittarius (this is the same company that Felicity discovered bough the black arrows way back in episode 9). Robert determines that Malcolm owns a third of the Glades so that once it is destroyed, he can personally rebuild it. Robert wants Frank and him to buy the rest of the Glades to stop the Undertaking but need the capitol. Frank is on is way to Shanghai and wants Robert to come with him but he doesn’t as Malcolm might get suspicious. Anyways, Robert wants to take the Queen’s Gambit out for another voyage.

Oliver then walks in asking his dad for some money to pay the pizza delivery guy. He then takes the pizza and a bottle of wine to his room and a waiting Laurel (who is studying for her LSATs). They then talk about mutual friends who have decided to move in together and wants to talk to Oliver about moving in together. But Oliver thinks they are moving too fast but Laurel is ready to make the next step. Oliver agrees to move in but we all know that this is scaring him.

Back to the present, a distraught Moira confronts Malcolm for breaking his word on not killing Walter if she cooperated with the Undertaking but Malcolm shows video proof to Moira that he is still alive and the Undertaking is about to happen. Listening in is Arrow who is surprised that his mom is a part of this whole mess.

At the Arrow Cave, Felicity finds Oliver all quiet as she wishes she had investigated more to find Walter. Oliver then tells Felicity that Walter is alive and to look into Malcolm’s phone records to see who he called to get the video feed of Walter shown to Moira.

Felicity finds out that Malcolm placed a call to a tenement building in Bludhaven and when they see satellite footage, they see how it is heavily guarded but only one guard on the roof. With no other buildings in the area, Felicity wonders how Oliver is going to get in. Oliver tells Felicity that he does have something, which is him parachuting in.

Security makes Arrow and of course he systematically takes care of all of them. Arrow then arrives to Walter’s cell and sets him free, where he is reunited with Moira, Thea and Oliver at the hospital. Felicity too drops by to say hello to Walter.

We are then back to the moments before Robert sets off on the Queen’s Gambit. Oliver wants to tag along and while Moira objects, Robert lets him. Laurel then arrives to say goodbye to Oliver while he is telling her sister, Sarah, to drive around the block so not to be seen by Laurel. What a jack ass. We can totally see how in love Laurel is with Oliver. We also see Laurel give Oliver the picture that he is always seen with on the island. Laurel then asks Oliver if she freaked him out over them living together, he says no but again we know he is lying. He then boards the boat.

Another reveal is Frank, on Malcolm’s orders, has placed a bomb on the Queen’s Gambit but because the boat is going to hit some rough weather, the ship going down will be blamed on that and not the bomb.

Malcolm comes by the hospital wanting to know if Walter is able to identify his kidnappers but Oliver only says that he is glad that his family is back together. All the while, you can see that Oliver is looking at Malcolm a whole lot differently.

Laurel then drops by to ask about Walter but really to ask Oliver to talk to Tommy and tell him that there is nothing between them and that he is not in love with her anymore. But Oliver won’t do that because it wouldn’t be true. Laurel looks stunned at this revelation.

Back at Diggle’s place, Oliver drops by to apologize about Deadshot, about being wrong about her mom being involved with the Undertaking and Malcolm. While Oliver tells Diggle that they are planning something terrible, we see a Mack truck transporting a crate with Unidac Industries on it enter Starling City. Oliver then asks for Diggle’s help in stopping the Undertaking.

So we know the reasons for the Undertaking but what exactly is the thing that will level the Glades? We will find out next week.