This is the first-ever “Botanical Week” on the Canadian version of the show but this theme appeared during season 7 of The Great British Baking Show/Bake-Off aka the last season with Mary Berry and Mel and Sue. I remember this week because self-proclaimed gardener, Jane, did not do well in this challenge at all.

Do we have any green thumbs amongst our Canadian bakers? Let’s find out.

A strawberry tart that I made last year

What I would bake: Earl Grey vanilla pastry cream topped with strawberry and mangos. My tart made from a sweet pastry dough.

I love the idea of tropical flavours in Mahathi’s tarts.

Sheldon: Tanghulu Strawberry tarts filled topped with pistachios, sage leaf and hard candy glaze. Bruno noted that not all of the strawberries were glazed properly and Kyla commented that they were too big to eat. Kyla liked the texture of the goat cheese in the tart.

Tanner: Little Tarts of Sunshine with a thyme crust filled with orange blossom pastry cream and topped with strawberry and clementines. Bruno noted inconsistent baking and the strawberry was sliced to thin. Kyla liked the thyme in the dough calling it sophisticated.

Maggie: Lavender Peach tarts filled with lavender cream and peach jelly topped with peach flowers. Kyla loved the different designs. Bruno noted the tarts were baked properly. Both liked the lavender in the tarts with Bruno calling it subtle and brings everything together

Larry: Dragon Ball Fruit Tarts filled with orange pastry cream and topped with dragon fruit. Kyla liked the natural jewel tones of the design. Bruno noted the lack of glaze of Larry’s tart but called it a refreshing tart.

I decided not to make last week’s “Italian Week” technical bake (Cannoncini) because it involved me buying metal cone moulds and pistachio paste. Instead, I decided to make Sheldon’s Bonfire S’more biscotti as I had all the ingredients already in my pantry. Read how they turned out here.

The Bake: 16 pan-fried herb garden dumplings with a scallion dip

Soup dumplings I made for Chinese New Year

How I would have fared: I too know how dumplings should look. For Chinese New Year, I made soup dumplings and BBQ Tofu buns to varying degrees of success. I made the doughs successfully but my issue was folding the dumplings correctly so the filling didn’t squeeze out of the top. Cooking the dumplings is not an issue. I’ve made dumplings that way so many times. So mine’s would be ugly but the delicious. Considering all that, I would say I would be near the middle.

Also, will I attempt to make these? I do have all the ingredients on-hand with the exception of the spinach and cabbage but probably not. The only reason is that I need a bit of a break from baking (I know  – blasphemy!). I will eventually but just not in time for next week. 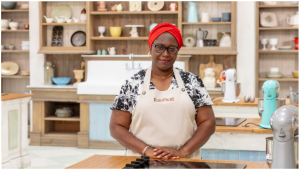 The Bake: Two-tiered floral cake. Bakers can do whatever cake and filling but there most be one botanical flavour in there. Decorations must be handmade, edible and beautiful flowers

What I would bake: Over a decade ago, I took a cake decorating class through the Vancouver School Board’s Continuing Education and one of the things we learned was how to make decorative flowers out of icing. Despite that, I haven’t really done much cake decorating since then so would really have to practice that skill if I ever were to get into the tent. As for what I would make? Does lavender count as a botanical flavour? If yes, then I would make a lemon lavender cake with a honey lavender buttercream and mango jelly. Floral decorations TBD.

Sheldon: Flower Power Cake, a Hawaiian themed cake made with shiso buttercream and pineapple and salt plum jelly. Bruno says it looks like a Hawaiian shirt and there is a good ratio of cake and filling. Bruno liked the shiso flavour but rather had it in the compote than the buttercream.

Tanner: Australian Outback Cake made with coconut cake and hibiscus jelly topped with gum paste banksia flowers and succulents. Bruno and Kyla noted the imperfections of his icing of the cake. Bruno called the jelly quite sweet.

Larry: Mediterranean garden made with lemon and thyme olive oil cake topped with olive trees made with gum paste and buttercream. Bruno noted the unfinished look of the cake. Kyla liked the the decorations and liked the filling. Bruno also said he couldn’t taste the olive oil.

Maggie: Garden Party Cake made with chamomile buttermilk cake, caramelized mango jam and topped with buttercream and gum paste flowers. Bruno and Kyla admired the different techniques used for her decoration. Bruno said the cake was a bit dry.

Raufikat: Hibiscus Raspberry Cake made with lemon poppyseed cake, hibiscus jelly and decorated with buttercream roses. Kyla loved the clean look of the cake, calling it stunning and liked the hibiscus jelly. Bruno couldn’t taste the raspberry in Raufikat’s cake.

We said goodbye to Larry

Quick Thoughts: This is an unpredictable season. I few blogs back, I said that Larry, Maggie and Mahathi were going to be in the final three but with Larry going home this week that prediction goes out the window. Season 4 has been most unpredictable. Next is the quarterfinal but I hazard to guess who will be sent home. To be honest, I was a bit shocked that Larry went home but I guess if you don’t finish your showstopper and the judges couldn’t taste your technical then the writing was on the wall.