The last time we saw Joanna Hanley, she and her law partner Billy Crawford had just one a major case against Matheson Steele. The factory was found find liable for making several teen girls ill from dumping toxic chemicals and resulted in a multi-million dollar payouts. Despite Billy asking Joanna to stay in their hometown of Millwood and join his law practice, she opts to take up a job offer in Winnipeg. Season 1 ends with Joanna entering her new job with a new name: Joanna Chang.

As season 2 opens, Joanna is on her way home from a late night at work when all of a sudden her car goes on the fritz. It has been hacked and an ominous voice comes over her car speakers.

We then go back to 18 hours before where Teddy Lavery (Saving Hope’s Michelle Nolden), one of the partners at Joanna’s new law firm states a client asked specifically for her to be his lawyer. The client is Noah Achari (Varun Saranga), a hacktavist, who received an injunction for him to take down an app that targeted his former company. Noah wanted Joanna as his lawyer based on her success with the Matheson case.

However, Noah didn’t give Joanna time to prepare for his defence as the two were due in court within the hour. In court, the tech company states that the code in Noah’s app is too similar to their code and wants the app taken down. Joanna pleads with the judge to have more time to prepare for a proper defence but the judge sides with the tech company and orders Noah to take down the app.

Unfortunately for Joanna, Noah refuses to take down the app. So Joanna forces Noah to come back to their office later to find out why. In the meantime, Joanna and her associate, Sunil (Raymond Ablack) receive all the files from Noah’s previous lawyers and learn his legal troubles with his former company go way back. Sunil tells Joanna that Novatech, Noah’s former company, is owned by Lovand, a weapons contractor. Sunil thinks they should drop Noah as a client but Joanna insist that they keep Noah on.

When Noah returns, he explains to Joanna that his app scrambles the information that comes as a result from data mining so people that are doing the mining will receive goobly goop as a result. Joanna doesn’t see what the big deal in having the app taken down but when Noah starts to reveal all of Joanna’s private Internet search to prove a point, she kicks him out of her office.

Meanwhile, back in Millwood, the town as fallen on hard times since the case. Matheson Steele closed down and the town has become restless. A break-in at the pawn shop finds Owen arresting an aboriginal kid but he lets them him go because he know people like them will always get the blame. Owen also gets the kids to promise that he and his friends will return the stuff they stole.

As for Billy, he and Joanna won Case of the Year from the Manitoba Bar Association and he goes to Winnipeg for the awards luncheon hoping to see Joanna. Alas, Joanna skips out to work on her case. But the trip wasn’t a bust as Billy goes to meet Taylor Matheson who we last saw skip town with the hush money her dad received. Earlier in the episode, Ben Matheson wanted Billy to give Tayler a note knowing he knew her location. Billy delievers the note to Taylor and she learns her parents are getting a divorce but she is not ready to see them again. 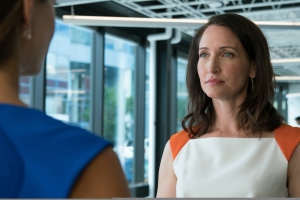 Before leaving Winnipeg, Billy meets up with Joanna and secretly gives her their award after she rebuffs it. We clearly see there is still some romantic feelings there but they don’t act on it. Earlier, Joanna’s boss, Teddy, told her that she needs to let people in and not work so much. Teddy points out that no one in the office knows anything about her, a point proven when Sunil only knows professional stuff about Joanna and nothing personal.

Once Billy returns home, he heads to the Boot for some drinking, lamenting to Owen what Millwood has become. Owen offers to drive Billy home and when the two see that his front door has been left open, they proceed cautiously inside. They find Billy’s younger brother, Shane (Andrew Chown), watching TV and eating his food asking for a place to stay.

As an aside, for the whole summer of 2016, I saw Andrew Chown, the actor who plays Shane, be Romeo in Bard on the Beach’s splendid production of Romeo and Juliet. I saw that production like 4 times. I just enjoyed it so much like the music used and the chemistry Chown had with his Juliet (Hailey Gillies). End of aside.

Also in Winnipeg is Luna and Molly. The former has returned from school for the summer and the two have moved into a place that Molly got with her settlement money. Molly seems to be doing much better and hasn’t had a tick in 3 months. Luna got a job as a waitress but on her first day, she receives the bad news from her mom that the charges against David Hanley were dropped for lack of evidence. Luna calls Joanna to pretty much say WTF and doesn’t think David should get away with it. Joanna heard this same news but from her dad who tried to reach out with an olive branch but after hearing that he wouldn’t be charged for the statuary rape of Gerilyn, any chance of reconciliation went out the window.

To get Luna’s mind off what happened with David, Molly takes her out to a night club. But Luna isn’t having a good time and leaves and ends up in a bad part of Winnipeg. The Bear Patrol, a First Nations neighbourhood watch, comes across Luna and offers to walk her home to make sure she arrives safe.

As Joanna packs it in for the night, she is confronted in the parking garage by Noah. Noah apologizes for digging into her personal life and explains Lovand has weaponized some of the technology behind his app. Noah says he is only alive because he is the only one that knows how to take down the app otherwise he would be dead. Joanna refuse to listen to anymore and we arrive to where the episode began. The ominous voice replays Joanna’s conversation with Noah and tells her she has been warned.

It will be interesting to see how season 2 can have Joanna and Billy work together again as right now there seems to be two separate stories happening. One in Winnipeg and another back in Millwood with no intersection. I think what I liked about season 1 was there was this one big case about David taking on Goliath so to speak.

But glad to see Michelle Nolden back on TV. Totally loved her in Saving Hope and how awesome would it be if Benjamin Ayers comes back to work at Joanna’s law firm too and I would get a Zach and Dawn reunion (the characters that Ayers and Nolden played on Saving Hope).